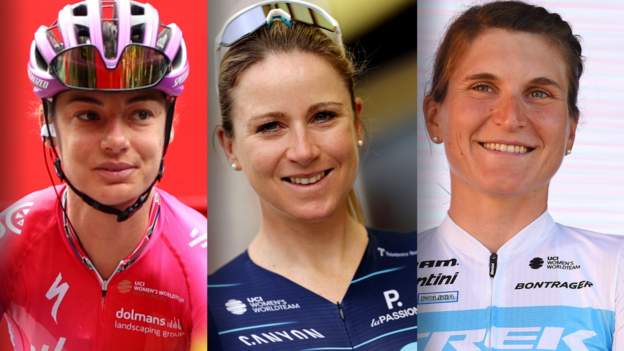 The Tour de France Femmes officially returns to cycling for the first time in 33 years on Sunday.

The eight-stage race begins on Paris’ Champs-Elysees on 24 July, the same day as the men’s race concludes in the French capital.

While various races equivalent to the women’s Tour were held across France until as late as 2009, and La Course by La Tour de France was launched in 2014, this is the first major stage race hosted by the Tour organisers since 1989.

With a mix of flat, hilly and mountainous stages as well as sections of gravel thrown in, this year’s edition suits the ultimate all-round rider.

BBC Sport looks at some of those in contention to win the coveted yellow jersey.

The Dutchwoman is the most dominant rider in the peloton, having won basically every major race over the past decade.

Among her multitude of Olympic and world titles and classics wins are three Giro d’Italia victories – up until now the most prestigious and toughest stage race on the women’s calendar – including this July’s 10-stage contest, which she won by almost two minutes.

Add to that, in just 20 days of racing in 2022, the former world champion also has Liege-Bastogne-Liege among her four other wins as well as runner-up spots at Flanders, Fleche Wallonne and Strade Bianche.

The race’s final two mountain stages in the Vosges will suit the 39-year-old climber to a tee as the harder the race, the more she thrives. In an ominous warning to her rivals, she’s been training in the Pyrenees and at altitude in Andorra this spring to prepare.

The fact Van Vleuten has the Tour de France down as one of her major targets this year should be warning enough.

All-rounder Longo Borghini has been one of the most consistent high performers in the peloton over the past three seasons.

The 30-year-old has finished in the top 10 of 46 races out of 76 race days in the past two seasons and chose to chase stage wins at the recent Giro in order to save all her efforts for a full charge at the Tour de France’s GC.

Longo Borghini’s versatility is her biggest asset. She took her overall win at the Women’s Tour in May thanks to a scintillating sprint at the top of Black Mountain, while her victory at April’s Paris-Roubaix came thanks to a 30km solo breakaway on the cobbles of the ‘hell of the north’.

The Italian’s Trek team is also crucially one of the strongest in the race and the experience of road captains Ellen van Dijk and Audrey Cordon-Ragot, as well as world champion Elisa Balsamo as a team-mate, means Longo Borghini will have the kind of support at her disposal that can make a difference at a stage race such as this.

The diminutive South African climbing specialist has finished runner-up at the Giro Rosa twice – most recently last year – and is one of the strongest riders in the peloton in the high mountains and hilly classics.

Moolman Pasio said she is targeting a stage win and spot on the final podium at the Tour, and is not simply a specialist when the road goes uphill.

The 36-year-old said she has been paying special attention to the gravel on stage four and her track record at Strade Bianche in recent years tells of her pedigree away from tarmac, with a fourth, eighth, sixth and third place among her results.

SD Worx are notoriously dominant and if any team knows how to control and disrupt a stage race, they do. The fact Moolman Pasio can call on directeur sportif Anna van der Breggen, the former Olympic and world champion, for tactical support from the team car will only give her more of an edge.

Charismatic leader Uttrup Ludwig, 26, has made no secret of her desire to win the yellow jersey and repeatedly proved herself with a string of top fives in tough stage races over the last few years.

Her wins at the Giro dell’Emilia and Vuelta a Burgos both ended on steep climbs – and her desire to attack and animate a race constantly makes her a danger.

Alongside Uttrup Ludwig will be rising star Cavalli, who was the stand-out rider of the recent Giro. The 24-year-old finished runner-up and was the only rider able to really push van Vleuten, in a breakthrough season that’s also seen her win hilly classics Amstel Gold Race and Fleche Wallonne.

The Pole’s explosivity makes her suited to short, steep, punchy climbs and stage 3 to Epernay in the heart of champagne region has Niewiadoma’s name written all over it.

The climb to the finish line might not be categorised by organisers ASO in the roadbook, but it’s a leg-stinger in a similar style to the Mur de Huy – the finishing climb or ‘wall’ that defines the spring classic La Fleche Wallonne, where Niewiadoma has five top-five finishes.

The yellow jersey is likely to change hands here and the 27-year-old has has her eye on this stage. But Niewiadoma is equally dangerous on longer climbs that require a steadier, more sustained effort as we’ll see later in the race.

Niewiadoma is also a rider who massively thrives on confidence. A good opening few days and her threat will grow as the days progress.

The rider who has done it all, Vos has defined women’s cycling since bursting onto the scene in 2006 and winning the road world title as a teenager.

After a long absence with burn-out and injury, the 35-year-old has specified her racing style and targets much more. While winning the race general classification is unlikely to be part of Vos’ plan, her sprint on flat or short, steep climbs is as powerful as ever.

The Dutchwoman won two sprints at the Giro to take her total stage wins at the race to a record-beating 32 and she’ll be targeting more stage wins at the Tour. Looking at the profile of the first six flat or rolling stages you can conceivably see Vos winning any of them.

Her success helped pave the way for the return of the women’s Tour. She was part of a group of riders which campaigned for the race which saw the launch of La Course – an event she won three times – and to see Vos triumph again and possibly hold the yellow jersey for a few days would be fitting for her legacy.