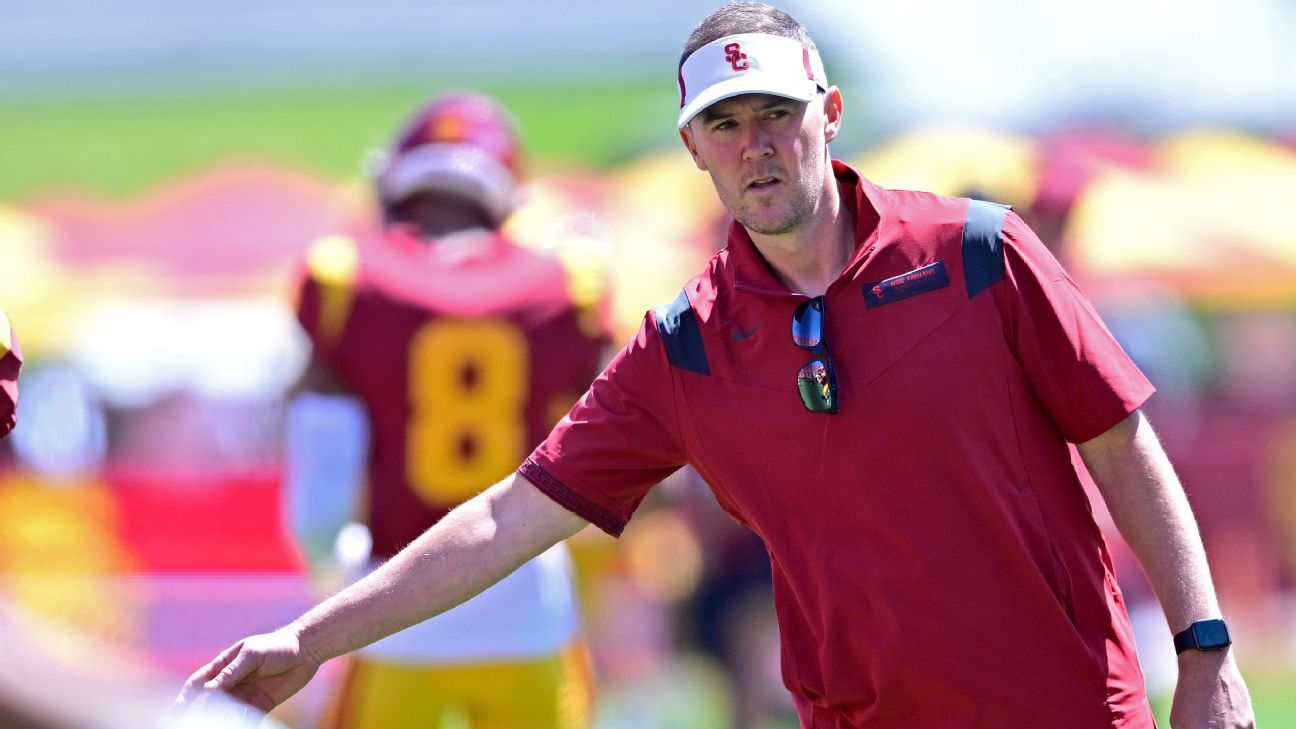 College football roster management has always been a rather fraught affair. Between stars weighing whether to go pro, underplayed underclassmen thinking about transferring, the forever-stressful experience of both winning key recruiting battles and keeping said battles won, everyone needing to keep their grades up and so on, projecting what a roster will look like six months or a year into the future always has come with a pretty large margin for error.

That has gotten even trickier, of course, with the advent of the transfer portal and the NCAA’s long-awaited decision to no longer require first-time transfers to sit for a year. This was a welcomed and downright necessary development in terms of improving and expanding the rights of athletes, but the resulting (and dramatic) increase in transfers has made life trickier for both coaches and those of us in the expectation-setting business.

Coaches who are deeper into their tenures but in need of a quick jolt — such as Buffalo’s Maurice Linguist (21), Georgia Tech’s Geoff Collins (17), Nebraska’s Scott Frost (16), USF’s Jeff Scott (15), Arizona State’s Herm Edwards (14) and Indiana’s Tom Allen (13) — have taken the plunge as well. And a couple of the sport’s more unique thinkers, Ole Miss’ Lane Kiffin (17) and UCLA’s Chip Kelly (13), have come to see the portal as a door to scoutable and potentially high-level talent.

While 2022 has seen more transfers than ever before, there were a lot in 2021, too. What lessons can we learn from last year’s batch that might inform and help set expectations for this year’s?

Because the requirements of different positions are so varied, and because the statistics for measuring performance at given positions are too, I decided to keep things simple. I created a quick scoring system based primarily on two things: How much did a transfer play, and how well did he play?

Loosely speaking, the scoring scale was set up like this:

3. Played quite a bit and performed at an average or worse level

4. Played quite a bit and did well

5. Absolute star, one of the best in college football at their position

I gave players a score for their old school and their new school, then looked at the resulting changes and averages. Here are my takeaways.

The averages were remarkably similar across positions

While I was unable to account for every single transfer who landed on an FBS roster in 2021, I ended up with a healthy sample of nearly 700, broken into generalized position units — quarterback, running back, wide receiver/tight end, offensive line, defensive line, linebacker and defensive back. (I did not include special teams play.)

Despite the varying statistics I used to judge how a player performed (and the varying number of players from a given unit on the field at a given time), the performance averages for each of these groups were much more similar than I expected.

(Note: All transfers from FCS or lower were given a score of 1 for 2020. I went back and forth on the best way to approach that, but I settled on basically evaluating how a player played, and how much, at the FBS level specifically.)

Aside from running backs, who were more likely to have played at least a marginal role in their team’s offense the year before their transfer, everyone’s average score increased by between 13.8% and 21.7%, and each position average ended up between 2.26 and 2.56.

The trenches appeared to offer the most potential for starring roles. Of the offensive linemen in the sample, 27% ended up receiving a score of 4 or higher, perhaps due to the prevalence of starting roles available. (I also might have been an easier grader here due to the lack of great statistics to go by.) If you are a lineman looking to transfer, the risks and rewards are pretty high. You’re more likely than others to land a starting spot, but if you don’t, rotations aren’t large, and you’re likely to ride the bench.

Elsewhere, 23% of linebackers, 22% of defensive linemen, 20% of defensive backs, 19% of receivers/tight ends, 18% of running backs and 14% of quarterbacks received a score of 4 or higher.

What this might mean for 2022: In grading incoming transfer classes, we probably don’t need to weight them by how many players were brought in at different positions. It also might mean that schools that loaded up on offensive line transfers — Colorado State (six), Texas Tech (five), Arizona State, Buffalo, Florida State, Georgia Tech, Nevada or Rutgers (four each) — could indeed find the solid contributors they were looking for.

Most likely to succeed: the P5-to-P5 transfer

Since traffic flows in all directions in the portal, I also looked at how scores changed based on the level players were both departing from and moving to. I separated them into five categories: FCS-to-FBS (which, for convenience, also included a small handful of transfers from schools lower than FCS), G5-to-G5 (as in, Group of Five conferences), P5-to-P5 (power conferences), G5-to-P5 and P5-to-G5.

This all probably looks about as one would expect.

P5-to-G5: Players dropping from a P5 school to a G5 were likely doing so in search of playing time, and they often received it, though few became outright stars on their new teams.

G5-to-G5: This group was a big pile of uncertainty. At 26.0%, it had the highest percentage of what I’m calling relative no-shows — guys who didn’t see the field last season and aren’t on the 2022 rosters. (The no-show average among all categories: 17.4%.) It also almost had the highest average of relative stars, with 24.7% of them garnering a score of 4 or higher. This group was heavy on receivers and defensive backs, though transfers at those positions fared worse than others.

P5-to-P5: In theory, it’s easier to scout a player who’s going from like-to-like and staying within the same level of play. Power conference players moving to other power conference teams enjoyed the highest performance average and were most likely to see a score of 4 or higher.

One other aspect that made the P5-to-P5 transfer worthwhile: These players were less likely to be upperclassmen and more likely to stick long term. As of the updated rosters that I have collected in recent weeks, 59% of P5-to-P5 transfers were still on the roster in 2022, compared to 57% of P5-to-G5, 51% of G5-to-P5, 44% of G5-to-G5 and 30% of FCS-to-FBS. (The latter group was made up primarily of senior small-school stars who took a shot at the big time in their final season of eligibility.)

• Utah State coach Blake Anderson saw success in bringing over quite a few players from his previous school, Arkansas State, just as Western Kentucky saw major improvement in bringing over not only Houston Baptist offensive coordinator Zach Kittley, but also many of his HBU charges. That could mean good things for a school like Colorado State, whose new coach, Jay Norvell, poached heavily from his previous employer, Nevada.

• Among the more high-profile small-to-large leaps (FCS-to-FBS, G5-to-P5), data suggests that guys in the trenches, such as Florida offensive lineman O’Cyrus Torrence (Louisiana) or Florida State defensive end Jared Verse (Albany), are perhaps slightly more likely to play at a high level than the ones out wide, such as Texas receiver Isaiah Neyor (Wyoming) or Arizona receiver Jacob Cowing (UTEP). (Torrence also has the benefit of playing for Billy Napier, his former head coach at Louisiana.)

Among teams that lost at least five players to other FBS schools in 2021, the six with the highest SP+ ratings in 2020 were Alabama, Clemson, Oklahoma, Georgia, Florida and Texas A&M. The players who left these schools likely did so in search of playing time and/or stardom elsewhere — if you’re a star on an awesome team, you don’t have many reasons to leave — and they were pretty likely to find it. The 60 players who left those schools went from an average rating of 1.75 to 2.77, an average increase of 58%.

What this might mean for 2022: Texas, led by former Alabama offensive coordinator Steve Sarkisian, brought over a couple of Alabama pass-catchers — tight end Jahleel Billingsley and receiver Agiye Hall — who caught only 21 combined passes in 2021. Their odds of clicking are pretty good. The same potentially could be said about Georgia transfers like safety Latavious Brini (Arkansas) and corner Jalen Kimber (Florida), Ohio State transfers like corner Sevyn Banks (LSU) and defensive lineman Darrion Henry-Young (Kentucky) and so on. Teams with loaded lineups are more likely to have some high-level dudes on the bench.

(That conclusion wasn’t exactly rocket science, was it?)

Losing a ton of transfers didn’t hurt much

By my count, 18 FBS teams lost at least 10 players to another FBS roster in 2021. For some, this was an extension of the foreboding feelings that the 2020 season had brought — LSU lost 10 after collapsing to 5-5, Temple lost 12 after collapsing to 1-6.

For other teams, however, it was an opportunity for renewal. Tennessee lost 17 such transfers during the dramatic transition from Jeremy Pruitt to Josh Heupel, Kansas lost 13 in the awkwardly timed spring move from Les Miles to Lance Leipold, and Michigan State lost 16 as Mel Tucker was entering his second season and ramping up culture-building efforts.

Of the 18 teams that lost double-digit players to other FBS schools, their average SP+ ratings remained almost identical to the previous year’s, and among the seven schools that lost at least 13 transfers, four (Tennessee, Michigan State, Georgia and Florida State) improved by at least 7.6 adjusted points per game in my SP+ ratings. Two others (Auburn and Kansas) remained mostly the same, and only one (Oklahoma) regressed by a measurable amount. If you’re a coach in his first or second year, heavy portal entries are not to be feared; in some cases, they might be encouraged.

What this might mean for 2022: For teams like LSU (Brian Kelly) and USC (Lincoln Riley), with first-year coaches and massive turnover figures — both have brought in and lost large handfuls of players — it’s quite conceivable that the positive impacts of the former could significantly outweigh the negative impacts of the latter.

Texas State coach Jake Spavital made waves in the winter of 2020-21, electing to fill almost his entire recruiting class with players from the portal. It was an attempted upgrade in terms of both culture and experience … and his Bobcats were almost exactly the same team, on paper, last fall, rising from 2-10 to 4-8 but slipping from 114th to 118th in SP+. It was neither a massive success nor a massive failure — it was nearly net neutral.

Others had different experiences, but the main conclusion here is how inconclusive everything was. Of the 17 teams that brought in double-digit transfers, eight improved by healthy amounts (Utah State and Western Kentucky improved significantly), two regressed quite a bit (most notably Temple) and seven saw minimal impact on their overall quality. On average, that’s a net gain — about 3.3 points per team in the SP+ ratings (3.4 for teams with first-year coaches) — but it bears mentioning that most of the teams that dipped this heavily into the portal were also really bad. Their average SP+ ranking in 2020 was 94th. None had finished the previous season in the SP+ top 40.

All teams that ranked 90th or worse in SP+ that year — no matter if they took on heavy, light or non-existent transfer loads — improved by an average of … 3.3 points per team. Did heavy portal usage actually help or was this simply progression to the mean?

What this might mean for 2022: If there has been a shift in 2022, it’s that we aren’t just seeing really bad teams load up on transfers. To date, we’ve gone from 17 FBS programs taking double-digit transfers last season to 42 this time around, and among them are 11 teams that finished 2021 in the SP+ top 40. Last year’s sample doesn’t really tell us much about how these teams will fare.