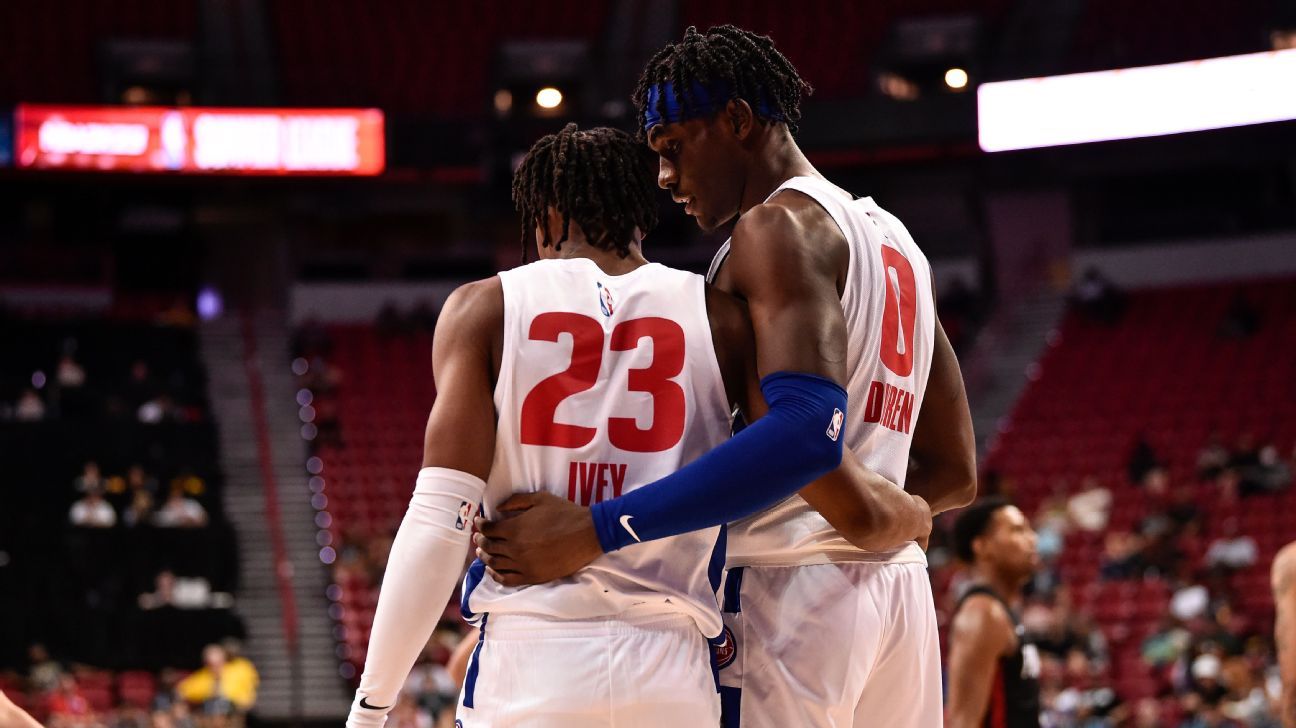 LAS VEGAS — IT’S the final game of opening night at the Thomas & Mack Center, and the crowd — some Detroit Pistons fans, some Portland Trail Blazers fans and the rest just folks itching for some sports action in the middle of the offseason — arises in jubilation on a single play.

The Pistons win the opening tip, and guard Killian Hayes, the No. 7 pick in the 2020 NBA draft, dribbles the ball up the floor. From his left, Jaden Ivey, this year’s No. 5 pick, dashes around a screen, with the Blazers’ summer league defense helplessly trailing behind.

Ivey catches the bounce pass and blasts toward the paint. While he does, the 6-foot-11, 250-pound Jalen Duren, the No. 13 pick in this year’s draft, sneaks his way near the basket, Portland all but ignoring the rookie center. Then, with the flick of his wrist, Ivey lobs a high pass to Duren, who snatches it midair for the two-handed slam.

One play — during summer league, no less — is the epitome of small-sample theater.

But the Pistons, losers of 157 games over the past three seasons, hope it’s a glimpse of something more, a future they’re three years into building.

“You feel [Duren] when he’s out there,” an Eastern Conference scout told ESPN. “[With Ivey], they got the two most athletic players in the draft.”

“He’s fast. I’m not fast,” Cunningham said. “To have somebody like that with me, it spreads the floor out a lot. I like to kick ahead to push the pace and he can literally sprint it there. It’s going to be fun.”

The Pistons have come out of the draft and summer league feeling like one of the biggest winners in the league, with Ivey and Duren joining a core that includes Cunningham as well as Saddiq Bey and Isaiah Stewart, both of whom were selected in the 2020 draft’s first round. These players are the foundation, they believe, for a future contender in the Eastern Conference.

“I think we hit a home run,” a team source told ESPN. “Yeah, you can feel the excitement. We positioned ourselves well and [general manager] Troy [Weaver] did a great job of putting guys together on the same timeline.

“We’ll probably have the youngest team in the league next year, or one of [them], so we have to be careful not to put too much pressure or set expectations. We’ve got great chemistry, and I think we’re going to be in position to make a big jump in wins.”

IN THE HOURS leading up to the draft on June 23, Weaver received a phone call from Pistons owner Tom Gores.

“I want you to be aggressive,” Weaver recalled Gores telling him. “And go for it.”

The Pistons had their franchise player in Cunningham. Weaver was just one of many in the Pistons organization who had repeatedly said adding a guard with speed and athleticism to the backcourt rose up the team’s priority list this summer. And with the most salary-cap space in the NBA, they were prepared to explore options during free agency, sources told ESPN.

But then, the board on draft night fell exactly to their liking. With the No. 5 pick, it was a waiting game.

The first four players picked were all forwards, putting Detroit in position to draft the first — and top — guard available in Ivey.

And with their top priority addressed, one more player remained on their wish list.

The New York Knicks were looking for ways to clear salary-cap space on draft night as they prepared to sign guard Jalen Brunson during free agency. The Knicks were eager to find a suitor to take Kemba Walker‘s $8 million salary off their hands in order to present Brunson with a four-year, $104 million contract, and so the Pistons found their way back into the first round by joining a three-team trade with the Charlotte Hornets for the rights to Walker and acquired the Hornets’ No. 13 pick — Duren.

In exchange for the 18-year-old, the Hornets received a bevy of future picks, including a 2023 first-rounder, three 2023 second-rounders and a 2024 second-rounder.

And the Pistons got their big man.

Detroit was the first team Duren worked out with during his draft process, and a team source said his performance left an impression on the organization — and vice versa. Duren said he told his agent after the pre-draft workout that Detroit is where he wanted to play.

“This is where I wanted to be throughout the whole process,” Duren said. “Detroit is used to winning, so definitely get back to restoring the culture. I feel like the team is a great young team. A team that can grow together.”

The on-court fit for Ivey, Duren and Cunningham is already apparent to rival teams.

“You’ve got a downhill threat, a lob threat, and another guy who can pass,” a rival Eastern Conference executive told ESPN. “That’s gonna be hard to guard. They’ve got some dudes who you expect to be good. Even if one out of three of those dudes hit, they’re set up well.”

The day after the draft, Ivey, Duren and the Pistons’ brass gathered at Rouge Park in Detroit for the rookies’ introductory news conference. A warm, sunny day, a makeshift stage was set up on a basketball court, with trees decorating the background and a crate of basketballs set at the foot of the stage near the lectern.

Weaver and Pistons coach Dwane Casey sat at the table next to the lectern, both wearing blue polos, while Ivey and Duren donned black Pistons polos and flat brim caps.

When presenting the players with their jerseys, Pistons vice chairman Arn Tellem surprised Ivey with the jerseys of three of Ivey’s relatives, all of whom have ties to the city of Detroit.

Ivey’s mother, Niele, played for the Detroit Shock during their final season in the WNBA. His grandfather, James Hunter, spent his entire career in the NFL with the Lions. And his father, Javin Hunter, grew up in Michigan and played high school football in the city.

“I hope you frame these wherever you live and every day look at these as your inspiration and your incredible ties to this city,” Tellem said.

Get access to exclusive original series, premium articles from our NBA insiders, the full 30 for 30 library and more. Sign up now to unlock everything ESPN+ has to offer.

Tears streamed down Ivey’s cheeks as he took pictures with the jerseys and his parents.

“I’m familiar with the city, I came here all the time as a young boy,” Ivey said that afternoon. “To be here and to be a Piston is a blessing.”

As Weaver, who became the team’s general manager in June 2020, sat on that stage, he thought back to that conversation he had with Gores hours before the draft. He remembered how he wasn’t sure how draft night would play out. Then he glanced to his right and saw Ivey and Duren.

“This is what the result of being aggressive and going for it is,” Weaver said. “We’re thankful and grateful that we landed here. These moments will be inflection points of the restoration.”

“RESTORATION” IS THE term Weaver and the Pistons have coined to describe their efforts to bring the Pistons back to contention.

Since Detroit’s last playoff appearance after the 2018-19 season, no team in the NBA has won fewer games (63), but with its new additions, optimism is surging across the organization.

“I’m happy we got two big-time talents,” Cunningham said. “Troy worked some kind of magic. I think it all worked out perfectly.”

The Pistons’ starting lineup could feature five former first-round picks in Duren, Stewart and Bey, led by a duo of top-five picks in Ivey and Cunningham. Jayson Tatum and Jaylen Brown of the Boston Celtics set the benchmark for top-five duos, reaching the 2022 Finals in their fifth season together. Ja Morant and Jaren Jackson Jr., another top-five duo for the Memphis Grizzlies, made it to the conference semifinals in 2021-22 in their third season together.

Seeing an organization excited about its influx of young talent reminded Jaden’s mother, now the head coach of the Notre Dame women’s basketball team, of her year as an assistant with the Grizzlies during the 2019-20 season, Morant’s rookie and Jackson’s sophomore seasons in the NBA.

“Me putting on my coach hat, it’s like, ‘Oh gosh, those pieces are going to be special,'” Niele Ivey said. “I’ve been a part of a young franchise with the Grizzlies and I know how quickly they turned that around. I honestly feel like that’s where the Pistons are trending.”

And trending fast. Executives around the Eastern Conference are commenting on how this young team could snap Detroit’s postseason drought before Duren is old enough to legally drink.

“I still think they might be a year away,” the Eastern Conference executive said. “They’re going to play hard. Dwane Casey’s teams play hard. It’s just a matter of youth. It’ll be part of their growing pains, but it’ll be worth it in the long term for them.

“They’re going to be one of the more fun teams to watch.”