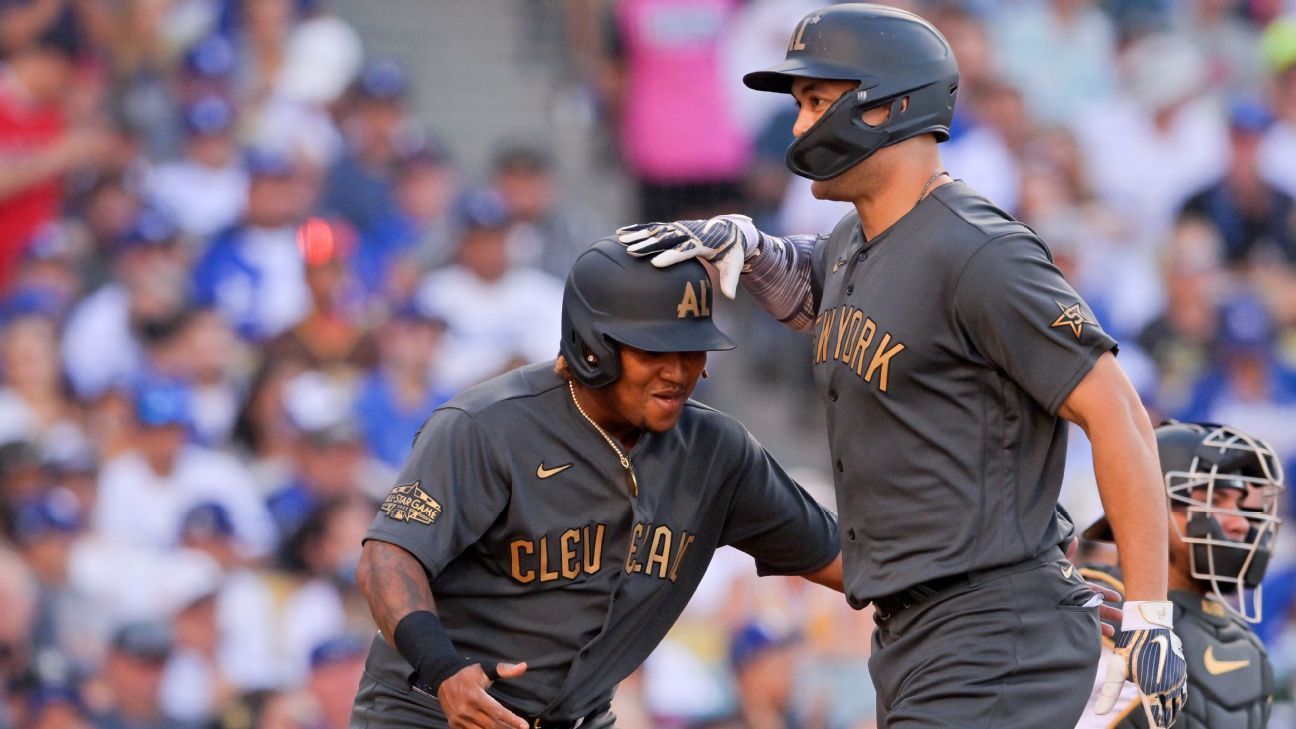 The 2022 MLB All-Star Game has officially gone Hollywood as Dodger Stadium hosts the biggest and brightest names in baseball.

It’ll be familiar territory for Los Angeles Dodgers ace Clayton Kershaw, who is just the sixth pitcher in the past 40 years to start the All-Star Game in his home park.

The Midsummer Classic has been one-sided in recent years, with the American League riding an eight-game winning streak. The AL also has a three-game edge on the series’ overall record of 46-43-2.

The National League has lost 20 of the past 24 All-Star Games, but hopes to get back in the win column in this year’s 92nd edition of the midseason showdown with manager Brian Snitker of the defending champion Atlanta Braves.

In the opposing dugout, Dusty Baker, manager of the reigning AL champion Houston Astros, looks to keep the status quo.

Here are the best sights and sounds from Los Angeles, along with a few All-Star Game predictions from MLB experts Jeff Passan, Buster Olney, Alden Gonzalez and David Schoenfield.

Live updates from the 2022 All-Star Game

For the exceptional levels of big dad energy Clayton Kershaw exudes, rare is the opportunity at the baseball field to use it. That moment finally arrived at Tuesday’s All-Star Game, when a 10-year-old boy named Blake Grice, part of the credentialed media, stepped toward Kershaw at the end of the press conference following his scoreless inning pitched.

“I want to tell you a quick little story,” Blake said, and he proceeded to talk about his grandfather, Graham Grice, who put together a bucket list with Blake after he was diagnosed with brain cancer. One of those items: Meet Clayton Kershaw and Vin Scully, the legendary Dodgers announcer.

Graham died in 2014, and when Blake started tearing up, Kershaw stepped from behind the podium to comfort him. “Come here, dude,” Kershaw said. “Great to meet you. Thanks for telling me. That took a lot of courage to tell me that. Your granddad sounded like an awesome guy.”

Blake leaned in, wrapped his arms around Kershaw and hugged him. They took a picture together. On the night he started at his hometown stadium, Kershaw did not get the win. But when Blake’s tears turned to a smile, it was clear that Kershaw had gotten the save. — Jeff Passan

Baseball Hall of Famer David Ortiz was in the AL dugout interviewing players and manager Dusty Baker. He even suggested Baker put him in the lineup.

Giancarlo Stanton just hit a ball into Chavez Ravine to tie this game. OK, it was only 457 feet and 111.7 mph exit velocity. Do the Home Run Derby next year, Giancarlo! Dodgers pitcher Tony Gonsolin didn’t even turn around. He also didn’t turn around as Byron Buxton, the next batter, followed with a 425-foot home run with a 107.7 mph exit velocity. We don’t have the official numbers going back to 1933, but let’s call it anyway: The two hardest-hit home runs in one inning in All-Star history. — David Schoenfield

Toronto Blue Jays pitcher Alek Manoah gave an interesting take on his slider while mic’d up on the mound during the second inning.

Keeping his promise
Clayton Kershaw was on his way out to the mound when FOX’s Ken Rosenthal asked him about his game plan going into his first ever All-Star Game start.

“I’m gonna throw as hard as I can, it’ll be 91, we’ll see what happens,” Kershaw said over the big screen at Dodger Stadium.

As promised, Kershaw’s first pitch traveled 90.9 mph. And, as promised, Ohtani swung, lining an opposite-field single. Moments later, Kershaw picked him off first base, paving the way for a scoreless inning. His fastest pitch of the inning? 91.3 mph. — Alden Gonzalez

Carrying on a legacy
On the same night as Rachel Robinson’s birthday, Mookie Betts wore this shirt to the All-Star Game. He then led a tribute to her.

Celebrating the Robinsons
After Denzel Washington read a video tribute celebrating the 75th anniversary of Jackie Robinson breaking the color barrier with the Brooklyn Dodgers in 1947, Mookie Betts and all the All-Stars came on the field to wish Rachel Robinson, Jackie’s wife, a Happy Birthday — her 100th. Well done, Mookie. — David Schoenfield

To give a special touch for the 75th anniversary of Jackie Robinson breaking the color barrier, FOX and production company The Famous Group teamed up to present a mixed reality experience for the television broadcast and the fans in the stadium, projecting animated baseball cards featuring the Dodgers legend on the field along with Denzel Washington’s commentary.

“What this became is an opportunity to really showcase not only not only what Jackie has contributed over the years of his active life, and then even what he’s done, in terms of the mark, he’s left after his life,” said Andrew Isaacson, the executive vice president of The Famous Group. — Joon Lee

Yes, the dislike for the Houston Astros continues to run deep across the country. Los Angeles Dodgers fans booed all the Astros players — plus manager Dusty Baker, the longtime Dodger outfielder who was part of their 1981 World Series championship team. Say it ain’t so, Dodgers fans. To be fair, they also booed San Diego Padres and San Francisco Giants players — with the exception of former Dodgers outfielder Joc Pederson, who received a nice ovation. — David Schoenfield

Teams and players showed off their footwear designs ahead of the All-Star Game.

Judge’s cleats for the All-Star Game are Avengers themed!

Celebrities like Denzel Washington, J.K. Simmons and Jon Hamm showed up at Dodger Stadium to take in the action.

The stars are out in Hollywood. #AllStarGame pic.twitter.com/VFw1FUS2Rk

Cookie & I are having such a great time! On behalf of the entire @Dodgers ownership group, we are so proud to host the 2022 MLB All Star Game at Dodgers Stadium. Thank you to MLB Commissioner Rob Manfred, the entire city, & the fans for making this the best All Star Game ever! pic.twitter.com/mIR5ReDBoU

Brothers, Chicago Cubs catcher Willson Contreras and Atlanta Braves DH William Contreras, are both starting for the NL. The last time brothers started in the same All-Star Game was 1992 when Robert and Sandy Alomar Jr. did it.

“We were just two kids dreaming of making it to the big leagues and now making it to the All-Star Game,” Willson said. “It’s a dream. There are a lot of brothers that would love to do the same. Being able to play with my brother against each other, then with each other, will be the best time of our lives.”

From the All-Star Game to Cooperstown? Where every ’22 star stands »

All-Star swag: Best looks from L.A. ahead of ASG »

Who will win the All-Star Game and by what score?

Gonzalez: These All-Star Games are often decided late, with the reserves on the field, and the American League’s superior depth and talent will win out in the late innings. With Jose Ramirez, Byron Buxton, Xander Bogaerts, Alek Manoah and Emmanuel Clase coming in late, it’ll ultimately be a boat race — the first in 10 years.

Passan: The National League wins 2-1. At least that’s what my coin and die said.

Schoenfield: The American League has won eight in a row — make it nine, as the AL wins 5-4 with a late rally.

Who is your All-Star Game MVP pick?

Gonzalez: Shohei Ohtani has been pitching and hitting at dominant levels for more than a month, and he will continue to do so in the Midsummer Classic. He’ll be the easy MVP pick.

Olney: Aaron Judge, because the All-Star Game is a relay race of pitchers throwing as hard as they can — and nobody has done more damage on fastballs this year than Judge. Plus, he has had a knack for checking every box on his way to free agency and winning the MVP would be another.

Passan: In a close game, late-inning heroics lead to MVP trophies. So looking at the NL bench, it would be perfectly reasonable for Austin Riley — whose 11th-hour selection came 11 hours too late — to provide the timeliest of knocks.

Schoenfield: Easy. Julio Rodriguez, my friends. He comes off the bench and delivers the go-ahead home run in the eighth inning (off David Bednar, in case you’re curious).

What’s the one All-Star Game matchup you are most excited to see?

Gonzalez: Ohtani has never faced Soto, either during the regular season or in the All-Star Game. It’s unlikely this year, too, given that Soto isn’t in the starting lineup and Ohtani, who might start, won’t throw more than an inning. But one can dream. And this is a dream matchup.

Olney: Ohtani vs. anyone, as a hitter or a pitcher — a reminder of how ridiculously unique he is.

Schoenfield: I’m going off the board here since there are too many to choose from. But how about Mets reliever Edwin Diaz, who has struck out more than 50% of the batters he has faced (something only Aroldis Chapman and Craig Kimbrel have done over a full season) against Luis Arraez, this generation’s Tony Gwynn. As a reference: Gwynn faced Nolan Ryan 67 times and struck out nine times.

Passan: Ohtani vs. anyone. It could be Ohtani at the plate, as the starting designated hitter, against whoever is unlucky enough to face him. It could be Ohtani on the mound, as a pitcher, blowing 101 mph heat or unfair splitters or sweeping sliders or joint-locking curves. Ohtani puts the “All” in All-Star.