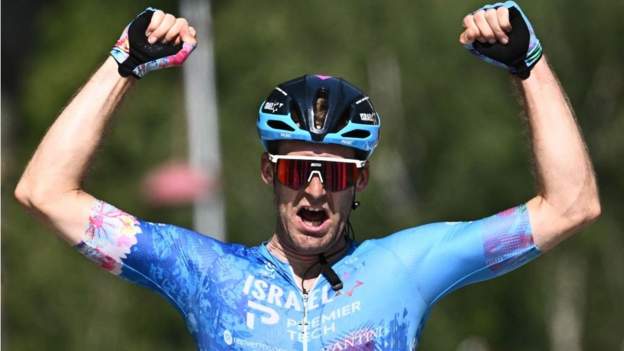 The 31-year-old Israel-Premier Tech rider became the first Canadian to win on the Tour since Steve Bauer in 1988.

Jonas Vingegaard retained the overall lead after holding off several attacks from defending champion Tadej Pogacar earlier in the day.

They finished together, along with Britain’s Geraint Thomas, who stays in third place overall.

The return of the race to the high mountains at the start of the final week of the Tour brought attacks from Pogacar on the first major climb of the day, the category one Port de Lers, which shook up the peloton.

More damage was done on the even steeper slopes of the Mur de Peguere, where it was Vingegaard’s Jumbo-Visma team-mate Sepp Kuss who set the pace, with Colombia’s Nairo Quintana also riding strongly.

Thomas lost touch with that elite group of climbers as the gradient ramped up but recovered and was able to ride across to them after going over the summit, which was 27km from the finish.

Other riders in the top 10 did lose time, including British duo Adam Yates and Tom Pidcock, and France’s Romain Bardet – who slipped from fourth to ninth overall.

Houle had come into the race with dreams of finally getting a stage win rather than challenging in the General Classification and claimed the first major victory of his career in style.

He was part of a 29-man break that escaped early in the 178.5km stage as it headed into the Pyrenees, and launched his decisive solo attack with 40km to go.

An emotional Houle pointed to the air as he crossed the line and later dedicated the victory to his brother Pierrik, who was killed by a drunk driver in 2012.

“I never won a race so I guess it’s the right place to win my first race,” he said afterwards. “I was suffering but I made it and it means a lot to me.

“I had one dream, win a stage for my brother who died. When I turned professional I worked for 10, 12 years and today I got my win for him. It is incredible, I don’t know what to say. I am just so happy.”

The riders stay in the Pyrenees for two more days, with Wednesday’s 129.7km route taking them from Saint-Gaudens to a summit finish at Peyragudes. The race finishes in Paris on Sunday.