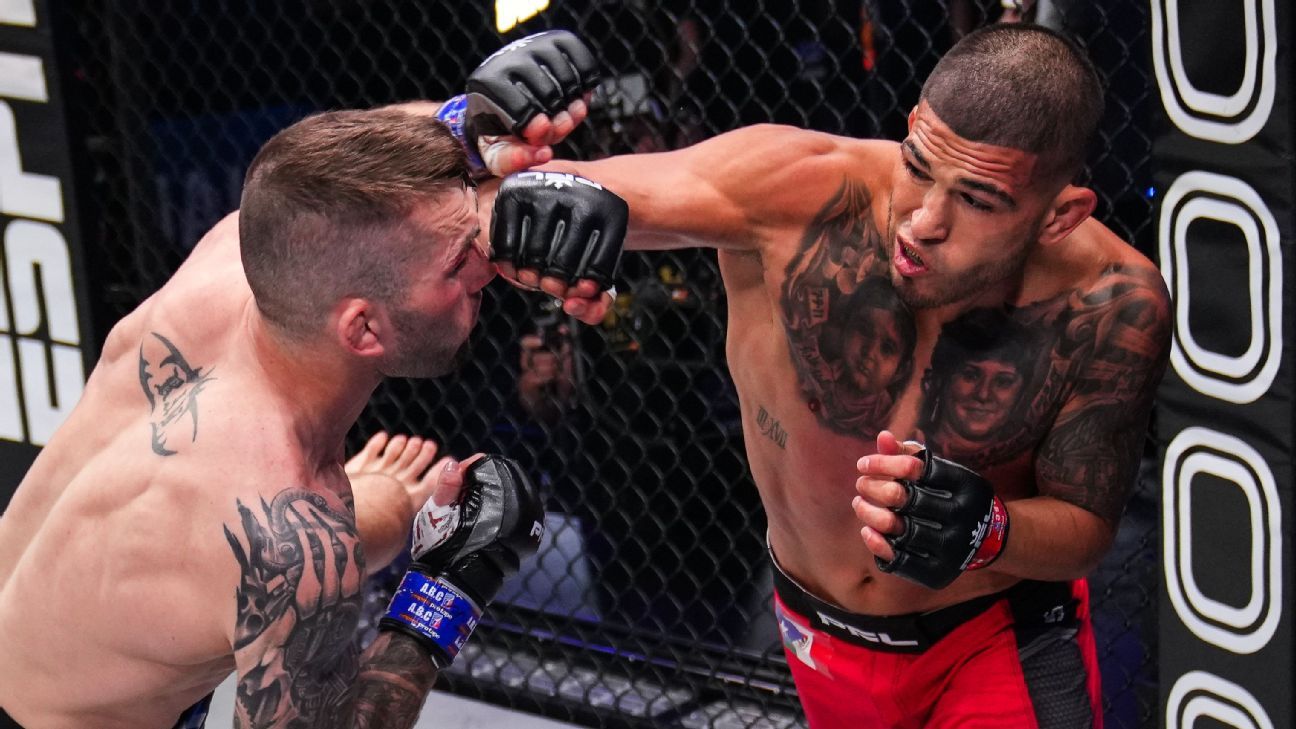 The Professional Fighters League playoffs are set to commence on Aug. 5 in New York City with semifinals in the light heavyweight and men’s lightweight divisions. From there, the playoffs will visit Cardiff, Wales, on Aug. 13 (featuring heavyweights and welterweights) and London on Aug. 20 (featherweights, women’s lightweights) before wrapping up 2022 with a night of six championship bouts in November at a location to be determined.

It has been an interesting year in the PFL. Several of the promotion’s top names have suffered upsets but still squeaked into the playoffs. Plenty of former champs are scattered among the playoff contenders in the six weight classes, and a few playoff first-timers are included as well.

Who is the fighter to beat in each division? And who is a wild card to keep an eye on? Here’s my view headed into the postseason.

Despite coming off a massive upset loss in his final regular-season appearance — which left him as the division’s No. 4 seed — Cappelozza is still the man to beat In this weight class. He won it all in 2021 and has the skill set and finishing prowess to do it again.

His loss to Matheus Scheffel on June 24 was a shock. There’s no other way to say it — and it shouldn’t be brushed under the rug. The Cappelozza we’d grown accustomed to seeing in recent years would have found a way to turn that fight around, but on this night, Cappelozza just … couldn’t.

As a result, he seems much more human going into the playoffs, but perhaps that just means he’s had the benefit of a reality check before the fights that matter most.

There were a couple of fighters I could have chosen with this pick, but at the end of the day, I feel like Delija is the most overlooked of the four heavyweights. He’ll face Renan Ferreira in the semifinals, and Ferreira, despite coming off a loss, has some hype behind him. There’s also Denis Goltsov, the No. 1 seed, but I will say Goltsov might have had the easiest path to the playoffs in his regular-season matchups. Delija is a veteran with PFL finals experience (he lost last season’s final to Cappelozza). He’ll probably be the least talked about of the four heavyweights as the playoffs begin, but it won’t be surprising at all to me if he ends up being the last one standing.

Carlos Junior might have finished the regular season as the No. 3 seed, but so far there has been nothing to suggest he can’t repeat as champion. Any threats to his 205-pound supremacy in the PFL have been few and far between, although he does draw an interesting assignment in the semifinals against a fellow veteran in Omari Akhmedov. That matchup is far from an easy win for Carlos Junior, but nevertheless, he has more than earned a target on his back in this weight class.

Don’t be surprised if Wilkinson turns into a trendy pick to win it all in 2022. The 30-year-old Australian looked outstanding during the regular season, recording finishes of Bruce Souto and Viktor Pesta. He had struggled to find fights early during the pandemic, so much so he fought only once in two years (plus one professional boxing match), but he looks to have improved during that time and has been a handful so far this year. His most recent loss in MMA came in 2018 against none other than UFC middleweight champ Israel Adesanya.

No one in this weight class has accomplished nearly as much as MacDonald has over the course of his career, and he deserves to be the favorite going in. But one has to wonder how much of the reason for that is his name value, and how much of it is his prowess in the cage.

Things are not perfect for MacDonald going into the playoffs. He secured a No. 1 seed early, because he finished Brett Cooper in the first round of their season-opening bout, but overall, MacDonald is just 2-5 in his past seven, and he struggled mightily to get things going in his latest fight against Sadibou Sy, who is the No. 2 seed.

MacDonald is the favorite, but his competition at 170 pounds doesn’t fear him like it used to.

Umalatov’s back was against the wall when it came to making the 2022 playoffs, as he had only one appearance to earn enough points after having to withdraw from his opening bout in May. OK, no problem — he knocked out Jarrah Al-Silawi in the first round to net six points and a playoff berth.

Umalatov doesn’t have a lot of name value, but those who have been paying attention know his 12-0 professional record is no joke. The American Top Team product could absolutely get past MacDonald in the semifinals, and if he does, he would likely be favored to win it all.

I expected to make Anthony Pettis the favorite in this division, almost by default. You see Pettis’ name and a No. 1 seed attached to it — how can he not be the favorite? But quietly, Aubin-Mercier is proving to be very difficult to beat in this PFL format.

He left the UFC in 2019 on a three-fight skid, but two of those losses came against very highly ranked competition in Gilbert Burns and Arman Tsarukyan. Aubin-Mercier is buttoned up. He fights smart and has great cardio. He’s not a guy who is going to beat himself. Stylistically, I think he matches up just fine with anyone he’s going to run into in the playoffs. The lightweight division feels like it’s up for grabs with no clear favorite, but I would say OAB is a small one.

Monday through Friday, host Pablo Torre brings you an inside look at the most interesting stories at ESPN, as told by the top reporters and insiders on the planet. Listen

Martinez will get a chance to take down the man I just named the favorite in his semifinals matchup, as he faces Aubin-Mercier at that first playoff event in New York. Martinez has been this division’s wild card all year. He has flown well under the radar in bouts against Stevie Ray and Clay Collard, but we got to see what he’s capable of in his final regular-season bout against Collard. A lot of fans wanted to see Collard in the playoffs, not only because of his style but because he felt he got robbed in a decision loss that kept him out of the playoffs in 2021. But Martinez played spoiler in June, and he has the tools to take out some more well-known names in the playoffs.

Obviously. Harrison went to a decision in May against Marina Mokhnatkina, and it almost felt like a loss despite the fact she had cruised to a clean sweep on the scorecards. Harrison routinely hovers between a 20-1 and 40-1 betting favorite. The majority of her career has not even come close to looking competitive. It’s why her free agency in 2021 drew so much attention, because fans want to see her challenged. Whether there is a lightweight in this group who is capable of doing that remains to be seen. As of right now, frankly, it doesn’t look like it.

I wish I could give an answer other than the top-seeded Pacheco, but she is the one woman in this division who has shown us anything in terms of potentially offering Harrison a challenge. They have already fought twice, with both bouts going the distance. Pacheco was unable to win a single round in either fight, including their five-round finals matchup in 2019. What would Pacheco have going for her in a third fight? Well, she’s 27 now and in the prime of her career. She would have familiarity with exactly what she’s getting herself into with Harrison, and she has finishing ability. Everyone is a long shot when facing Harrison, but Pacheco would appear to have the best chance.

It just feels like Wade’s year. It has felt that way pretty much since the 2022 season began. The Long Island-based fighter bowed out of the PFL lightweight semifinals in both 2018 and 2019 and lost in the featherweight finals in 2021. Will his perseverance finally pay off in 2022? He’s scheduled to face Brendan Loughnane in London — enemy territory, as Loughnane is from Manchester, England — despite Wade being the No. 1 seed. He’s coming off a sensational first-round finish of Kyle Bochniak in June. He also has a win over Bubba Jenkins, whom he might see in the finals. Wade is in control of his own destiny and he’s the sure-fire favorite until someone topples him in the cage.

No one is going to pay attention to Kudo going into these playoffs, which could be a huge mistake. Between Wade, Jenkins and Loughnane, Kudo is running with some of the most recognizable names in the PFL, so it’s inevitable that he’s going to be overshadowed. But perhaps more than anyone else at 145 pounds, Kudo carries legitimate one-punch knockout power. He’s a threat to anyone he faces in the playoffs. He won’t be a favorite, but do not overlook him. And if any of his opponents do, they might be sorry.

How are NASCAR’s drivers staying sharp away from the racetrack? Hours and hours of video games
‘I’m back’: Conlan bounces back, beats Marriaga
Is Cooper a lame duck without Kerevi?
Rugby Championship R1 wrap: Horrific Barrett fall could have been avoided
India Women vs Barbados Women, Commonwealth Games Cricket: When And Where To Watch Live Telecast, Live Streaming