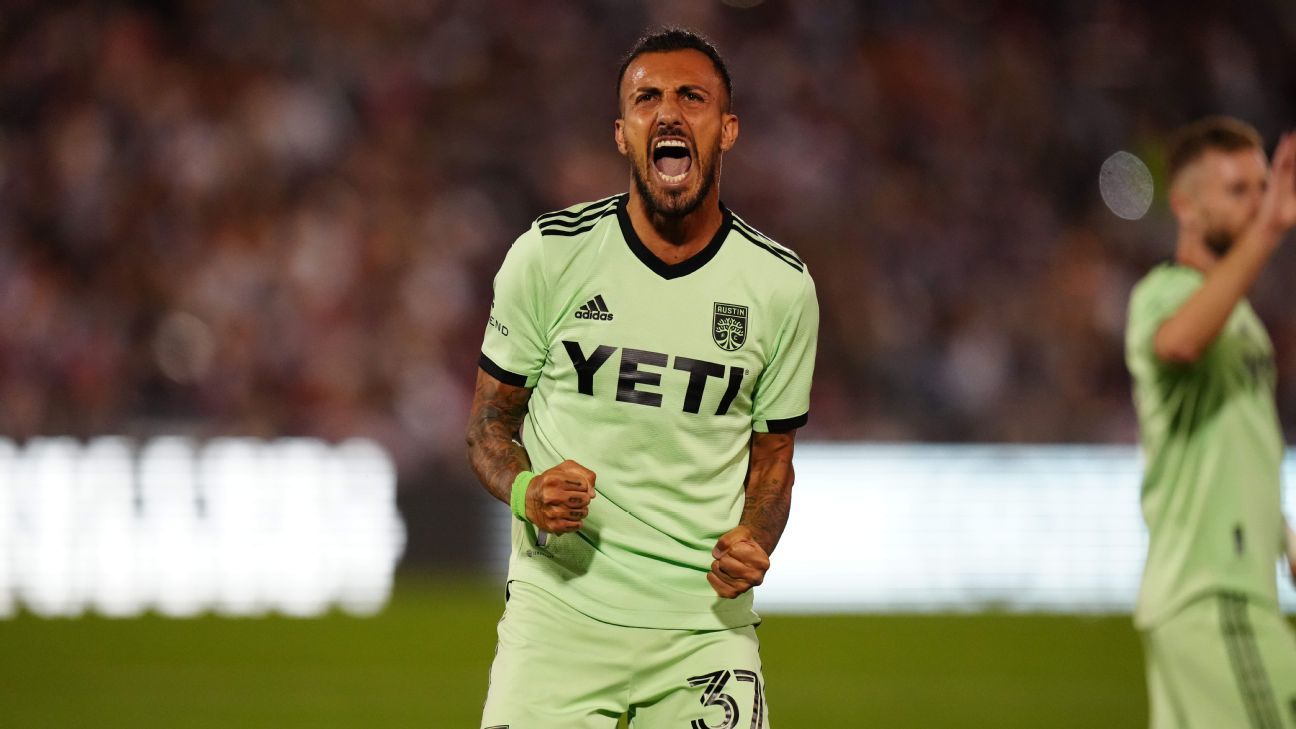 From the beginning of the 2022 campaign, Austin FC has drawn plenty of attention. Following a difficult expansion campaign, the goals have flowed in its sophomore season, and so have the wins.

There have been a hiccup or two — the home loss to the LA Galaxy springs to mind — that gave the impression that the Verde weren’t quite ready to really contend for the Supporters’ Shield, but Monday’s 3-2 win over the Colorado Rapids, one in which it came back from two goals down in the mile-high altitude, has perhaps signaled that a run for the best league record is possible. LAFC‘s 1-0 loss to the Vancouver Whitecaps over the long weekend means that Austin is just two points back of the top spot. The Black and Gold’s slip-up figures to be a mere speed bump in terms of form, especially with reinforcements in Gareth Bale and Giorgio Chiellini now eligible, but Austin is poised to make it a two-horse race in the West.

Out east, New York City FC‘s loss of form, as well as stumbles by the Philadelphia Union and CF Montreal meant that the New York Red Bulls‘ 1-0 win over Sporting Kansas City saw RBNY claim the top spot in the East. The win took the Red Bulls’ road record to 6-3-1, tied for the best in MLS with … Austin.

With Week 17 in the books, Jeff Carlisle and Austin Lindberg look at the results, break down where all 28 teams stand after a wild weekend of action and bring you the latest edition of the MLS Power Rankings.

Coughing up a late winner, as LAFC did in a 1-0 defeat to Vancouver, is always tough to take, but the Black and Gold didn’t really generate a whole lot of offense in this one, so they’ll have few complaints. With the summer window opening on July 7, Giorgio Chiellini and Gareth Bale will be eligible to play in this week’s edition of El Trafico. — Carlisle

Taking two wins on the road in the dog days of summer, following points in four of its past five games, is the sort of string of results that can galvanize a club like Austin as it positions itself for a playoff push. — Carlisle

Picking up six points in 72 hours, thanks to wins over Sporting KC and Atlanta, sees the Red Bulls move into top spot of the Eastern Conference. A deserved feat for a team that’s taken points from seven of its past ten league matches. — Lindberg

A pair of draws against Cincinnati and Atlanta sees NYCFC’s winless run extend to four games. The 2021 MLS Cup champions are officially in a slump. At least they can take solace in defending Golden Boot winner Valentin Castellanos once again leading the league in goal scoring with 10 on the campaign. — Lindberg

RSL made a game of it against Minnesota, scoring twice after going 3-0 down, but it wasn’t enough to avoid defeat. Anderson Julio looked lively off the bench, and returnee Jefferson Savarino looks like he’s never been away, with two goals and two assists in five matches. Despite the loss, RSL continue to punch above their weight. — Carlisle

Philly’s attack continues to misfire, shut out twice in the past week in a defeat to Chicago and a draw with Columbus. Among teams occupying playoff places, only Real Salt Lake have scored as sparingly as the Union, so perhaps this shouldn’t come as a surprise, but for a team that once looked far and away the best team in the East, it’s further evidence of returning to the mean. — Lindberg

Montreal’s West Coast swing got off on the right foot, with a 2-1 win over continental champion Seattle, only for it to finish on a sour note with a 4-0 hammering at the hands of the Galaxy in Southern California. Still, the Quebecois are just three points off the top of the Eastern Conference, and have a game in hand over the No. 1 seeded Red Bulls. — Lindberg

Nashville still remains among the better teams defensively in MLS, but there have been some head-scratching moments in 2022, especially late in games. Case in point is Sunday’s encounter with Portland, where it couldn’t hold on to a two-goal, second-half lead. A keeper blunder played a part, but one would still expect NSC to see that match out. — Carlisle

Dallas will feel it should have done better than a 1-1 home draw with Miami given the chances it had over the first 60 minutes. Conceding a late equalizer will stick in the craw as well, although Alan Velasco‘s tally from a free kick was outstanding. FCD are now winless in four games. — Carlisle

Following a midweek defeat to Montreal, Brain Schmetzer showed some faith in his depth pieces, and it paid off with a solid 2-0 road win over Toronto. The victory continued Seattle’s steady climb up the table, which now sees them fifth in the Western Conference standings. — Carlisle

After watching Javier Hernandez and Dejan Joveljic have success when paired up top in the latter parts of games, Greg Vanney went with that forward duo from the start and it paid off with a 4-0 hammering of Montreal that saw both players get on the scoresheet. It helped soften the blow of a midweek 3-2 defeat to Minnesota. — Carlisle

Draws with NYCFC and New England mean Cincinnati has points in four straight and is firmly in the fight to host a playoff game this fall, but most exciting is the form of Brenner: five goals in his past three games demonstrates why the 22-year-old was such a coveted prospect when he left Brazil for Ohio in 2021. — Lindberg

After the 2-2 stalemate with Cincinnati, the Revs have now drawn six of their past nine, which isn’t great for a team with aspirations of defending its Supporters’ Shield. The other three results, though? All wins. — Lindberg

The story of the expected goals (xG) suggests that Orlando was unlucky to lose 5-3 to D.C., but to put yourself in a 3-0 hole against a team fighting to stay out of the Eastern Conference cellar is not a kind reflection upon Oscar Pareja’s team. — Lindberg

When Emanuel Reynoso is at his best, there’s simply no stopping the Loons, even if they make things interesting on the defensive end. The Argentine’s four goals and one assist on the week powered Minnesota to a pair of wins over the LA Galaxy and Real Salt Lake. — Carlisle

The Whitecaps are on a roll, having taken 20 points from their past nine games, including Sunday’s 1-0 win over high-flying LAFC. Andres Cubas, who has been impressive since arriving in April, grabbed an 89th-minute winner. — Carlisle

An 88th-minute equalizer from Leonardo Campana is the least Miami deserved from its trip to Dallas, where the Herons often looked superior to their hosts. — Lindberg

There’s no shame in losing at home to one of the league leaders in Austin, and this year’s expansion club quickly made up for it by earning the first away win in its history with a 2-1 victory in Houston. — Lindberg

After the scoreless draw against Philadelphia on Sunday, the Crew have now been shut out in eight of their past thirteen MLS contests. Remarkably, Caleb Porters’ team still has only the seventh-worst scoring record in the league. — Lindberg

The Timbers have perked up of late, going unbeaten in their past four matches to climb within a point of the playoff places. Eryk Williamson provided a huge lift off the bench with his play in midfield, and his late assist on Jaroslaw Niezgoda‘s goal helped Portland pick up a valuable road point against Nashville. — Carlisle

If making it in New York is a barometer for making it everywhere else, Atlanta’s two-game swing in the Big Apple doesn’t inspire a lot of confidence: a draw with NYCFC and a defeat to the Red Bulls has the Five Stripes closer to the foot of the table than the playoff places. — Lindberg

A total defensive collapse from the Rapids saw it squander an early two-goal lead and fall 3-2 to Austin. Both execution and communication were in short supply along the back, and with the team winless in four games, Colorado looks a shadow of the side that won the Western Conference in 2021. — Carlisle

Sure, Charlotte has been better than expected, but losing 2-1 at home to an expansion side is a body blow for Houston, who have now dropped four of five and are sinking fast in the West. Hector Herrera, who becomes eligible this week, will need to be stellar to rekindle the Dynamo’s postseason hopes. — Carlisle

Losses to Columbus and Seattle, their seventh and eighth in their past eleven contests, ensures there’s only one pertinent question in Toronto: Is Lorenzo Insigne here yet? — Lindberg

The Quakes are tough to read at the moment. They’ve clearly been better under interim manager Alex Covelo, following the departure of Matias Almeyda, but they are still winless on the season away from home. All the more reason to take advantage of home cooking, which they did in a 2-1 win over Chicago thanks to Benji Kikanovic’s brace. — Carlisle

United’s 5-3 win over Orlando saw the American capital club score more goals in 96 minutes than it had in its previous five games combined. — Lindberg

Chicago registered one goal in each of the 1-0 defeat of Philadelphia and the 2-1 loss to San Jose. On just four occasions all season have the Fire scored more than one goal in a league game. — Lindberg

SKC had the edge in just about every statistical category against the Red Bulls — and played with a man advantage for the last 17 minutes — but were made to pay for some slack marking that allowed Aaron Long to score the game’s only goal. So it goes in a brutal season that now has Kansas City with the fewest points in MLS. — Carlisle