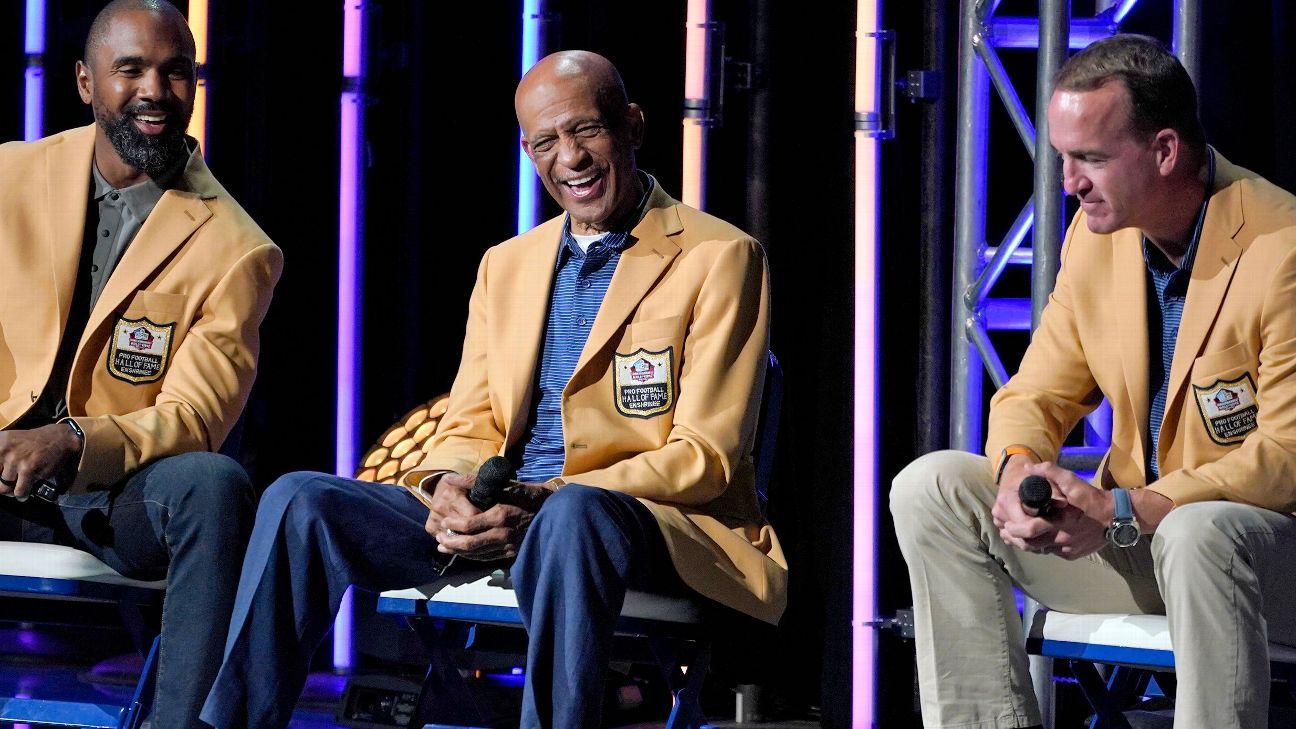 CANTON, Ohio — One of NFL’s most decorated players helped close out the Pro Football Hall of Fame’s enshrinement weekend Sunday night as quarterback Peyton Manning led the Hall’s Class of 2021.

Former Dallas Cowboys receiver Drew Pearson, who was the only first-team selection to the 1970s All-Decade team who had not been enshrined, led off the evening at the podium. A former college quarterback who made the Cowboys’ roster as an undrafted rookie wide receiver in 1973, was the Seniors inductee.

Pearson, who career was shortened by liver injuries he suffered in a car accident when he was 33, was to be followed by Tom Flores, the first minority coach to win a Super Bowl.

Flores and Hall of Famer Mike Ditka are the only people in NFL history who have been Super Bowl winners as players, assistant coaches and head coaches. Flores’ nine seasons as Raiders coach included two Super Bowl victories, an 8-3 postseason record and a playoff winning percentage of .727, which ranks behind only Vince Lombardi.

But the headliner of the group was to come third in the speaking order with Manning’s turn. Manning, who was selected in his first year of eligibility, played on two Super Bowl-winning teams, was a five-time MVP, a 14-time Pro Bowl selection, a former Offensive Rookie of the Year and Comeback Player of the Year.

After 14 seasons with the Indianapolis Colts, Manning signed with the Broncos in 2012 — making him one of the most accomplished players to change teams in the free-agency era. The Colts had 11 seasons with 10 wins while Manning was their quarterback and won Super Bowl XLI, with Manning earning MVP honors.

The Broncos won Super Bowl 50 to close out the 2015 season — the last game of Manning’s career — and complete a four-year run in Denver that saw the team win 50 games and four consecutive AFC West titles. Manning retired with numerous single-season and career records, including his 5,477 yards passing and 55 touchdowns in 2013.

When Manning was selected for enshrinement last February, Colts owner Jim Irsay had said: “Books have been and will continue to be written about the impact he and his family have made in all aspects of sports and life.”

Sunday night’s ceremony in Tom Benson Stadium capped off an extended enshrinement weekend with last Thursday’s Hall of Fame game and a ceremony for the Hall’s Class of 2020 and Centennial class selected as part of the league’s 100th anniversary Saturday night. Ceremonies for the Class of ’20 and the Centennial class were postponed because of COVID-19 restrictions.

Manning was to be followed to the podium by former Buccaneers and Broncos safety John Lynch. Lynch, now the San Francisco 49ers‘ general manager, was a nine-time Pro Bowl selection and helped the Broncos come a game from the Super Bowl in 2005. He had eight 80-tackle seasons, including 84 tackles in 2006 at age 35, and three 100-tackle seasons.

Detroit Lions receiver Calvin Johnson, who was the speak fifth, was selected for enshrinement in his first year of eligibility and the third player in the Hall’s history to be enshrined at 35 or younger. Johnson played nine seasons for the Lions before abruptly retiring following the 2015 season, when he had 88 catches for 1,214 yards and nine touchdowns. He retired in part because of injuries that plagued him throughout his career.

Alan Faneca, scheduled to speak next, was a nine-time Pro Bowl selection and is one of 12 guards in NFL history to be named first-team All Pro six or more times.

Former Packers and Raiders defensive back Charles Woodson was slated to close out the evening. Woodson was a nine-time Pro Bowl selection and finished his 18-year career tied for fifth in interceptions, with Ken Riley, with 65. He led the league in interceptions with nine for the Packers in 2009 and earned a Super Bowl ring with Green Bay the following season.

Long-time Steelers scout Bill Nunn, who was enshrined as a contributor, was to be honored posthumously with a video tribute during the ceremony. Nunn was a scouting pioneer, who began advising NFL teams on players from the nation’s historically Black colleges and universities he had evaluated when he was a sports writer and managing editor of the Pittsburgh Courier. Nunn later spent more than four decades with the Steelers, and was a key figure in the team’s dynastic run in the 1970s and return to the Super Bowl in the decades that followed. He died in 2014.