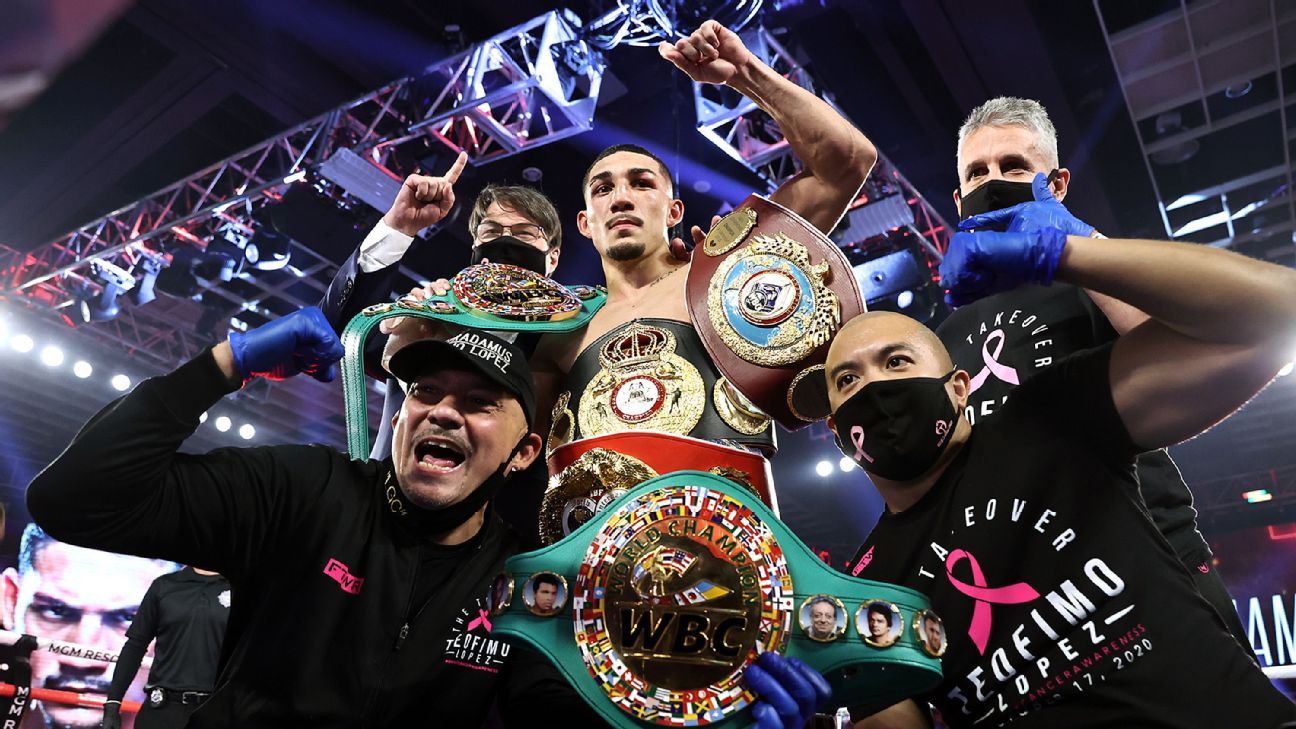 The IBF ruled Monday that Triller must stage the undisputed lightweight championship fight between Teofimo Lopez and George Kambosos in a location that doesn’t require quarantine, according to the decision obtained by ESPN. That means Triller’s plan to reschedule the event on Oct. 17 in Sydney, Australia, is scrapped.

The ruling settles — for now — a prolonged legal dispute between Lopez and Triller over the location and timeframe of a fight that was set for June 19 in Miami before the champion contracted COVID-19 the week of the bout.

Lopez’s side threatened to relinquish the 135-pound title rather than travel to the challenger’s home country and adhere to a government-mandated 14-day quarantine. Lopez’s team also argued that the fight should take place sooner than Oct. 17. The IBF ruled that the fight must take place by Oct. 17 with contracts due by Aug. 24.

“At the end of the day, we still don’t think that George has to be the one that’s inconvenienced,” Triller’s co-founder, Ryan Kavanaugh, told ESPN, adding that he would explore Las Vegas as a potential site for the fight. ” … We’re going to talk to him and see if we can make it work around his schedule. He didn’t see his kids for 16 weeks and his wife is having a baby now. If we can make it work, we will.”

In the event Triller fails to submit contracts by then, the rights to the fight will revert to the next-highest bidder at February’s auction. That would be Eddie Hearn’s Matchroom, which bid $3.506 million. Lopez’s promoter, Top Rank, came in third at $2.315 million. Triller won the rights with a bid of $6.018 million.

Kambosos, who lives in Sydney, trained in the Miami area for 16 weeks. His wife is due in mid-September, so if he again holds camp in the U.S., he could miss the birth of his third child. If Kambosos, 28, decides to forgo a career-high payday of $2.106 million, the IBF would order a fight between Lopez and Mexico’s Isaac Cruz.

The IBF would consider giving Triller extra time to hold the event before the end of the year if a request is filed, sources said. ESPN reported Sunday that the IBF was set to rule the fight can’t take place in Australia.

“We’ve been open to working this out with [Triller] the whole time,” Lopez’s manager, David McWater, told ESPN on Sunday. “They haven’t shown much interest in it. If that’s the ruling from the IBF, then we’ll abide by it as IBF champion.

Aug. 14 was originally announced as the rescheduled date before Triller set its sights on Oct. 17 in Sydney. The Lopez side objected to the fight taking place months after Aug. 14 but more so to the 14-day quarantine.

The postponement cost Triller nearly $5 million, sources said, money that included travel expenses and other logistical and marketing costs that can’t be recouped since event insurance isn’t protected against the coronavirus. Hoping to offset some of the loss, Triller thought it could capitalize on the popularity of boxing in Australia.

Lopez (16-0, 12 KOs) is promoted by Top Rank and fights exclusively on ESPN, but a disagreement with his promoter over money following his October victory over Vasiliy Lomachenko led to the bout with Kambosos (19-0, 10 KOs) heading to a purse bid.

Lopez, who resides in Las Vegas, and Top Rank engaged in a public spat in the weeks that followed the purse bid. However, the acrimony ended when the sides signed a restructured contract days before the scheduled bout with Kambosos (ESPN’s No. 9 lightweight) that raised his title-defense minimums from the previous purse of $1.25 million.

Top Rank hoped to stage a PPV rematch between Lopez and Lomachenko later this year, two boxers featured on ESPN’s pound-for-pound top-10 list. With Lopez’s title defense vs. Kambosos now on course to be staged later this year in the U.S., Top Rank has turned its attention to a Dec. 11 fight between Lomachenko and Richard Commey.