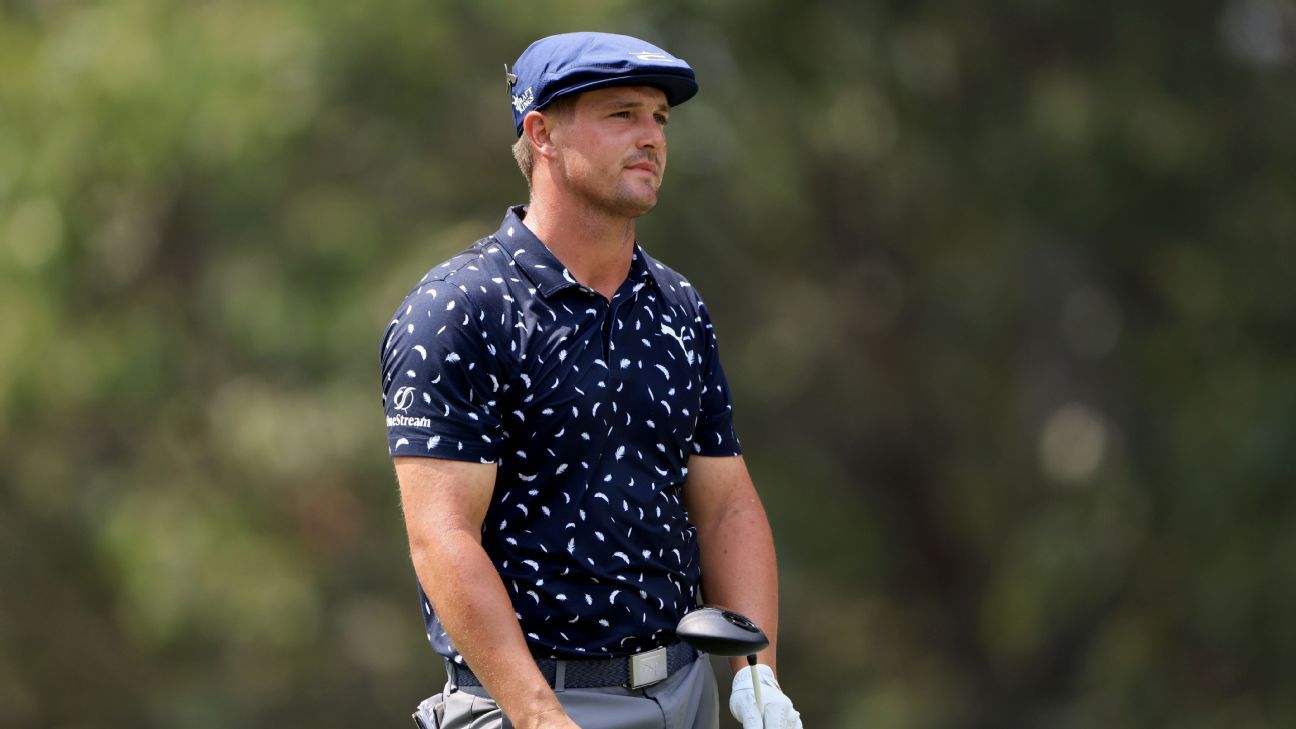 MEMPHIS, Tenn. – For the better part of two months, nothing has been easy for Bryson DeChambeau.

The latest example occurred on Sunday at the WGC-FedEx St. Jude Invitational, where the eight-time PGA Tour winner saw a chance to win evaporate with a couple of balls in the water on the back nine.

His four strokes lost to par over the closing nine holes cost him a shot at a sudden-death playoff at TPC Southwind, won by Abraham Ancer.

He finished with a 4-over-par 74 a day after shooting 63 on Saturday, dropping to a tie for eighth, and left following another frustrating week that saw him get criticized for his response to questions about his COVID-19 positive test that kept him from playing in the Olympics.

DeChambeau, 27, declined print reporter interviews all week in response to the backlash and was unavailable after the round Sunday.

It started well enough with birdies at two of the first three holes Sunday to give him a tie for the lead with Harris English, and he followed his first bogey with another birdie.

Then he got a break when his tee shot at the par-4 sixth was barely in bounds – it required a ruling with officials using a string to determine that the part of the ball was in play – and then he got a free drop because the ball was up against a temporary mesh fence. And it got even better as his stance would have been on a cart path, giving him further relief.

But DeChambeau could not take advantage, hitting his next shot into a tree, leading to a bogey. Soon, he and English were given a slow play warning and then started being timed on the 11th hole.

DeChambeau found water at both the 10th and 11th holes, the second one leading to a triple-bogey 6.

“It’s just tough to rush like that,” said English, who finished fourth and missed the playoff by a stroke after shooting 73. “We were getting warned on the front nine and it’s tough to catch up. I made double on 11, Bryson made triple and you can’t catch up doing that. From 12 on I felt like we were running.

“And it’s tough out there, the wind’s picking up. Obviously there’s some really good pins out here. You’re trying to win a championship and it’s hard. I don’t really like speeding up like that or feeling like I’m rushed, but I’ve got to get better at that.”

DeChambeau has been known to be meticulous on the course but he had his struggles on Sunday that explain it. He hit just 5 of 14 fairways and only 8 of 18 greens.

Prior to the tournament, DeChambeau said he had lost “8 to 10 pounds” in the aftermath of his positive COVID-19 test and had only resumed practicing a few days prior.

“I’m not really expecting much,” he said. “I’m just going out and trying to get through a whole week and feel comfortable and then do it again and get my golf swing in a place where I’m comfortable. So maybe some lower expectations this week.”

And yet, he played quite nicely through three rounds, shooting scores of 65, 66 and 63.

After each round, DeChambeau declined to speak to reporters due to the attention given his comments about his bout with COVID and the vaccines. Three reporters – one each from ESPN, Golfweek and the Golf Channel – spoke to him about what occurred.

“The vaccine doesn’t necessarily prevent it from happening,” DeChambeau said Wednesday. “I’m young enough, I’d rather give it (the vaccine) to people who need it. I don’t need it. I’m a healthy, young individual that will continue to work on my health.

“I don’t think taking the vaccine away from someone who needs it is a good thing. My dad is a perfect example. He got it (the vaccine) early on because he’s a diabetic. People like that need to get it. My mom got it. I don’t want to take away that ability.

“Now as time goes on, if it (the vaccine) is mainstream, really, really mainstream, then yeah.”

DeChambeau got considerable criticism, especially on social media, for those comments because the Centers for Disease Control and Prevention (CDC) has said that vaccines are readily and abundantly available in the United States, and that the majority of COVID-19 cases last week – more than 90 percent – are among unvaccinated people.

It was simply another example of the drama that has dogged DeChambeau for months.

In addition to the ongoing feud with Brooks Koepka, he shot 44 over the final nine holes at Torrey Pines when he was leading the U.S. Open and dropped to a tie for 26th; he split with his long-time caddie, Tim Tucker, prior to the Rocket Mortgage Classic, where he missed the cut; frustratingly called out his equipment, saying his “driver sucks” after the first round of The Open, drawing pushback from Cobra, his equipment maker and endorser.

And then he tested positive for COVID-19, knocking him out of the Olympics.

This was generally a good week for DeChambeau, although it’s tough to swallow a back nine that denied him a chance at victory. Now he gets a week to regroup before the start of the FedEx Cup playoffs, where he is seventh in the points standings.