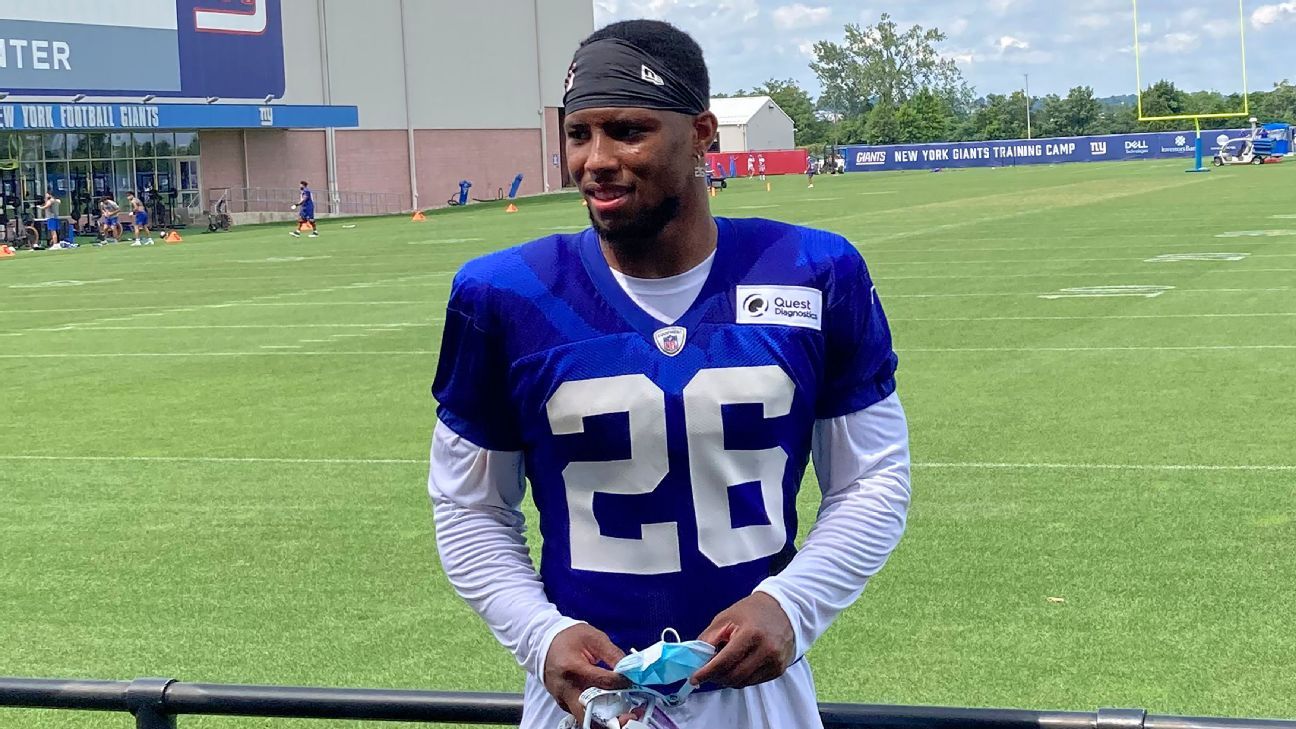 With the first full slate of preseason games kicking off on Thursday, teams continued to work in training camps across the NFL on Monday.

That included Houston Texans quarterback Deshaun Watson, who practiced for the first time in five days and running back Saquon Barkley, who was activated off the physically unable to perform list and returned to practice Monday for the first time since tearing the ACL in his right knee early last season.

And at the Ravens camp, Lamar Jackson is still iffy on getting vaccinated but he didn’t waste any time get back on track with his favorite target in the quarterback’s second practice since returning from COVID-19.

Here’s what you need to know from training camps across the league:

Jump to the best of the day:
Nation intel | Videos | Photos

Top NFL news of the day

Lamar iffy on vaccine despite second bout of COVID

Baltimore Ravens quarterback Lamar Jackson was noncommittal on whether he would get vaccinated after being infected with COVID-19 twice in the past eight months, saying it was a “personal decision.” “I just got off the COVID list,” Jackson said after Monday’s practice when asked if he would get the vaccine. “I got to talk to my team about this and see how they feel about it. Keep learning as much as I can about it. We’ll go from there.” Does that mean he’s thinking about getting vaccinated? “We’ll see,” Jackson said. “Talking to the doctors. We’ll see.”

New York Giants running back Saquon Barkley returned to practice Monday for the first time since tearing the ACL in his right knee early last season, and he expressed optimism afterward that he could be ready for Week 1. Barkley said he sees it as a positive that he has more than a month to get ramped up for the season opener on Sept. 12. “I guess you can say, with my mindset, I’m definitely hopeful,” Barkley said. “It’s definitely better being able to practice now than later on in camp.”

New England Patriots tight end Hunter Henry sustained a shoulder injury in Sunday’s practice and is having an MRI, according to a source. While initial indications are that the injury doesn’t appear serious, it is painful and Henry could miss time in the preseason, sources say.

Receiver Curtis Samuel has yet to practice this summer with Washington — he opened camp on the physically unable to perform list because of a groin issue and has been on the COVID-19 list since July 29. But coach Ron Rivera said he’s not concerned because his staff had Samuel in Carolina for three seasons. There’s no timetable for Samuel’s return. However, his only experience with quarterback Ryan Fitzpatrick occurred in OTAs. Without Samuel, though, other young receivers have received more opportunities. Rookie Dyami Brown has stood out. But it’s also given second-year wideout Antonio Gandy-Golden more chances. The 2020 fourth-round pick struggled last season although injuries didn’t help. He’s been more active in camp, but he also still must prove he can get off press coverage. Because he’s had more chances to work against the starters with Samuel out, it’s provided both him and the coaches a good barometer of what he can do. — John Keim

More people play on ESPN than anywhere else. Join or create a league in the No. 1 Fantasy Football game! Sign up for free >>

Marcus Mariota, a former No. 2 overall draft pick and Heisman Trophy winner, has been content to back up Derek Carr while healing numerous injuries. But Mariota is not content to hold a clipboard. He is keeping an eye on potential starting gigs around the NFL. “Yeah, absolutely,” Mariota, who has started 61 of 64 career games, said in only his second media conference since joining the Raiders in March of 2020. “It is my goal [to start again] and I do keep tabs on what’s going on. For us as players, it’s kind of important to see what the landscape is. But with that being said, I enjoy this team. It’s a great organization to play for and this quarterback room is awesome. I think Derek leads the charge. He’s a great guy to be around. It’s just a lot of fun to learn and grow together. Each and every single day I try to approach it the same way and try to just get better.” Mariota was off to a strong camp before getting picked off on consecutive days last week by linebacker Nick Kwiatkoski, and then cornerback Damon Arnette got him on the third day. — Paul Gutierrez

Outside linebacker Dante Fowler Jr. and right tackle Kaleb McGary returned to Falcons practice Monday. Fowler came off the COVID-19 list and McGary was activated off of PUP. While neither was made available to the media, both participated in varying levels during practice. Fowler was back with the first team for parts of 11-on-11 work and got at least one pressure on quarterback Matt Ryan. In individual work, he tied with Jake Matthews on one rep. The difference in potential explosion between Fowler and the other Falcons outside linebackers is pretty clear. As for McGary, he was more limited and worked with the second unit. Willie Beavers continued to work with the first group. Jalen Mayfield also worked in with the second group. — Michael Rothstein

Pass-blocking at training camp hasn’t always been pretty for Orlando Brown Jr., who is trying to become a full-time left tackle after his trade from the Ravens. Brown isn’t as athletically gifted as many left tackles, something he has acknowledged, so he’s struggling at times with the speed rush in 1-on-1 drills. Brown has mostly been better in team drills. “The thing that I’m impressed about is that the mistakes he does make, he doesn’t repeat them,” offensive coordinator Eric Bieniemy said. “That’s a great sign.”— Adam Teicher

It didn’t take long for the Lamar Jackson–Mark Andrews connection to get back on track. In Jackson’s second practice since returning from COVID-19, he hit Andrews on a couple of 20-yard passes down the middle of the field. Jackson lofted one pass over the linebackers, and Andrews pulled it in with one hand. Andrews has caught 135 passes from Jackson since 2018. No other Ravens player has more than 98 receptions over that time.— Jamison Hensley

The NFL regular season is just around the corner. Here are the biggest questions and roster projections for all 32 teams. Read more »
&#8226 Full 2021 schedule | Depth charts »
&#8226 Transactions | Injuries | More NFL »

Second-year Saints WR Marquez Callaway was already highlighted in this space last week. But then he continued to one-up himself with a TD catch from Taysom Hill in red-zone drills on Saturday and a TD catch from Jameis Winston in red-zone drills on Monday. Callaway has stepped into the No. 1 receiver role with confidence over the past week while Michael Thomas and Tre’Quan Smith have been sidelined by injuries (Smith’s unspecified injury is not expected to be a long-term issue). Although Callaway caught just 21 passes as an undrafted rookie last year, he appears poised for a much bigger role.— Mike Triplett

You couldn’t help but notice that right tackle Taylor Moton took most of the snaps during team drills at left tackle with Cameron Erving out nursing a shoulder injury. But what stood out more was coach Matt Rhule didn’t notice Moton, which in the coaching world means Moton wasn’t making mistakes. In fact, the offense moved almost flawlessly for a touchdown during a two-minute drill in which quarterback Sam Darnold completed 5-of-6 pass attempts. He did so with a mismatch of a line that included Moton at left tackle, Trent Scott at right tackle and starting left guard Pat Elflein at center. Starting center Matt Paradis had the day off. At worst this shows the depth on the line is better than it was at any point last season. — David Newton

After Saturday’s practice against the Los Angeles Rams, the Cowboys have just one full practice remaining in Oxnard, California, before their second preseason game. Having played the Pittsburgh Steelers in the Hall of Fame Game and practicing against the Rams in a 48-hour span, Mike McCarthy wanted to make sure his players could recuperate. He feels better about where his team is at this stage of camp than a year ago. “At the end of the day it’s about the team moving forward and making progress,” McCarthy said. “This football team is making progress in training camp. You can see it. We are getting better. We still have a ways to go. This is why you have training camp, but I like where we are so far.”— Todd Archer

Wide receiver James Washington wasn’t at practice Monday, a day after he appeared to sustain a lower left leg or knee injury. Washington participated in a few team periods Sunday, but finished the day on the sideline with a bag of ice taped around his lower left leg. Coach Mike Tomlin said Monday his third-year receiver, who ESPN’s Adam Schefter reported requested a trade because of decreased usage, was being medically evaluated, and he would likely have an update Tuesday. Tomlin also refuted that Washington expressed dissatisfaction with his role on the team. With Washington and fellow receiver Ray-Ray McCloud out, Anthony Johnson got more reps with the first team offense late in Monday’s practice. Johnson, who spent time on the Steelers practice squad last season, has been a fixture in the second-tier receiver group.

An inside look at QB1 from camp. pic.twitter.com/7GQvG2Mvq9

Deshaun Watson is back at practice. He talked to GM Nick Caserio as he walked out on the field. pic.twitter.com/j3HCUoWJ4V