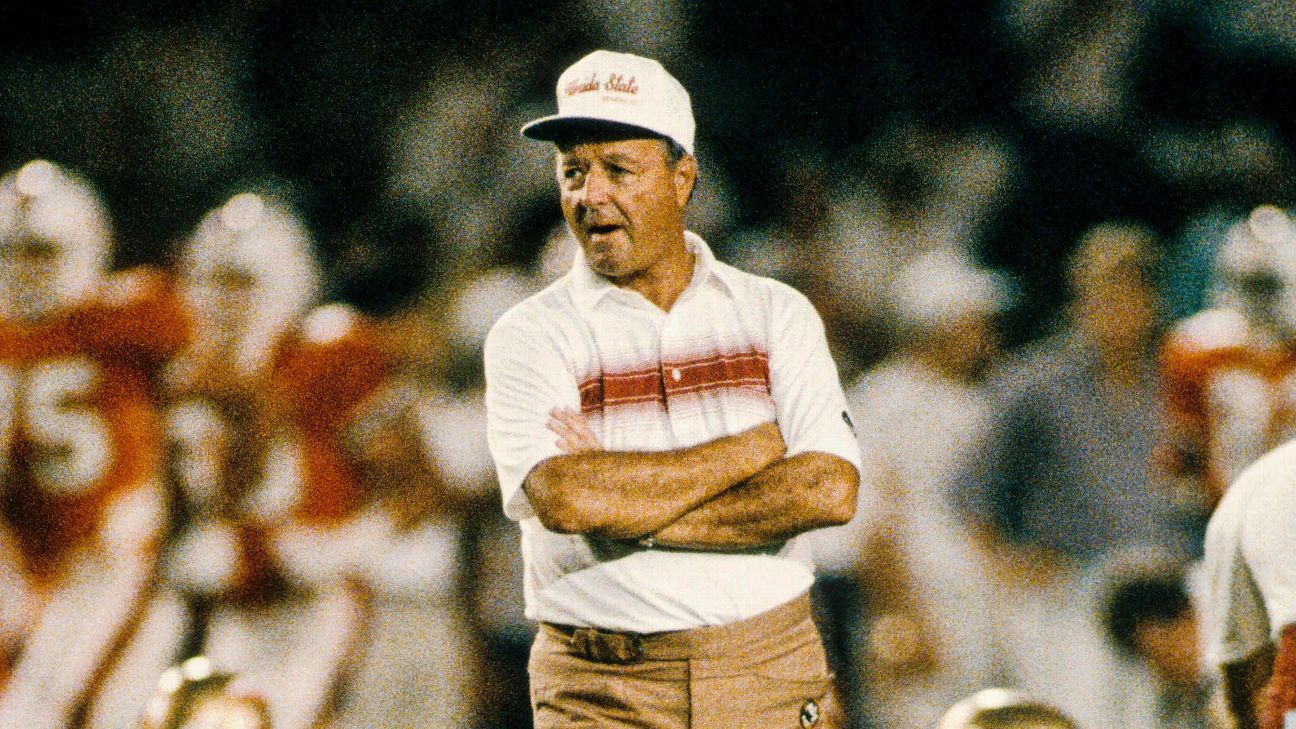 On Nov. 30, 1986, Florida’s Ricky Nattiel beat broken coverage from a talented but young Florida State secondary and caught an 18-yard fourth-quarter touchdown. In a driving rainstorm, the Gators won their sixth straight game over Bobby Bowden’s Seminoles. It left a famously talkative coach without answers.

“I thought maybe 8-3 would be the worst we could do,” Bowden told local media the next morning over coffee. “I really thought we’d beat Florida and go into next year with a lot of momentum.”

After charging to back-to-back AP top-6 finishes in 1979 and ’80, FSU had fallen into a rut. The Seminoles were still succeeding massively compared to their history — they would soon attend their fifth straight bowl (the All-American Bowl against Indiana) and seventh in eight seasons — but this was the second time in four seasons they had crumbled in the face of high expectations. In 1983, the Noles began the year seventh in the AP poll but lost to Tulane in September, lost by 39 to Florida and finished 7-5. In 1986, they started out 11th but got manhandled by Nebraska and Miami, tied unranked North Carolina and figured out a way to lose yet again to a .500 Gators team.

“It sure is hard to explain,” he said that Sunday morning. “I can’t explain it. I’m tired of being humble.”

He wouldn’t have to be for much longer.

To that point, Bowden’s FSU tenure had already been a heck of a story. He was not the Noles’ first choice to succeed Darrell Mudra in 1976 — others, like Pitt’s Johnny Majors and Indiana’s Lee Corso, had already supposedly turned them down — but after a rocky but encouraging six seasons at West Virginia, Bowden moved to Tallahassee, embraced a youth movement, and quickly surged.

FSU went 10-2 in 1977, finishing the season with dominant wins over Florida and, in the Tangerine Bowl, Texas Tech. Just two years later, the Noles rolled through an 11-0 season and jumped into the AP top five for the first time before losing to Oklahoma in the Orange Bowl. In 1980, they beat Nebraska in Lincoln and came within two points of an unbeaten regular season and potential national title.

FSU’s rise came together in a way that could not be duplicated today. Bowden, who died Sunday morning at 91, was a charismatic recruiter who found success tapping into the burgeoning (and only recently integrated) Florida high school market, and he was known as one of the braver playcallers in the game, both in the risks he would take and the trick plays he would draw up. His “Puntrooskie,” a fake punt-turned-fumblerooskie, beat Clemson in 1988. In 1991 against Michigan, the Noles ran two trick plays in the same drive, first completing a double-pass, then faking a field goal to score.

Rece Davis details the Puntrooskie, a Bobby Bowden trick play that was run against Clemson in 1988.

That part of the recipe, you might be able to replicate. The scheduling part, you can’t. As an independent program living in a time in which schedules weren’t drawn up a decade or more in advance, Florida State was able to start carrying itself as a major program before it became one. Bowden declared that FSU would play anyone, anywhere, then backed it up. The Noles played Nebraska four times from 1980 to ’86, all in Lincoln. They played a peak-of-its-powers Pitt four straight years from 1980 to ’83. They played LSU in Baton Rouge every year from 1980 to ’83.

This occasionally backfired, like when a young 1981 team faced road games against Nebraska, Ohio State, Notre Dame, Pitt and LSU consecutively. FSU actually went 3-2 in that stretch but collapsed from there, losing to Southern Miss and Florida by a combined 93-17 and finishing 6-5. And in the five years that followed, 13 of the Noles’ 18 losses came to teams ranked 16th or better in the AP poll, 10 on the road.

This was an absolutely brutal way to try to build a national reputation, and one could make the case that it hadn’t totally paid off. But then it did.

In 1987, FSU once again found itself getting the benefit of the doubt from pollsters; the Noles began the season eighth in the AP poll despite the previous season’s 7-4-1 disappointment. They beat their first four opponents, including Michigan State in East Lansing, by an average of 27 points. They fell to eventual national champion Miami by a single point in early October — a two-point conversion attempt in the final minute fell incomplete — and won their last six regular-season games, including road battles with Florida and No. 6 Auburn, by an average of 34 points.

They toppled Nebraska in the Fiesta Bowl to finish second in the polls, a single two-point conversion away from a national title. And they wouldn’t finish outside of the top five again until 2001.

Longest streaks of top-five finishes by an FBS coach:

Fourteen straight top-five finishes. It boggles the mind. From a pure achievement standpoint, Nick Saban’s current run of six national titles in 12 seasons at Alabama has perhaps surpassed it because of the rings involved, but even in that string, Bama finished seventh or worse three times.

FSU brought unerring greatness every single year for a generation. The Seminoles beat 27 top-10 teams in that span and averaged four All-Americans per year. They won two national titles, reached two more BCS Championship games (one they nearly won with a backup QB) and lost only to a given season’s national champion on two other occasions.

They did this even as the sport implemented scholarship limitations to democratize college football a bit. If a four-team College Football Playoff had been in existence at the time, they’d have been a favorite to win even more rings. They faced the peak of The U (and then its rebirth as well) and Steve Spurrier’s Fun-and-Gun and never lost their spot in college football’s ruling class.

In this era of power consolidation, it’s almost comforting knowing that the ultimate streak of success will not be broken any time soon. (At best, Swinney’s Clemson teams need eight more dominant ACC runs before he can tie the streak.)

It’s less comforting knowing that college football’s next Florida State might not have a path to the same type of success. Scheduling opportunities are limited, independence is a viable path for only a few schools (and most of them would leap at the right conference opportunity), and the consolidation that has occurred — and what could unfold further in the future — could affix a pretty low ceiling on a new up-and-comer.

Forty-five years ago, FSU boosters pooled together enough money to buy Darrell Mudra out of his contract after just two years. They wanted to win big, but they didn’t know what they were looking for. Bowden showed them. For better and worse, his successes might not be replicable. But at least college football saw them once.