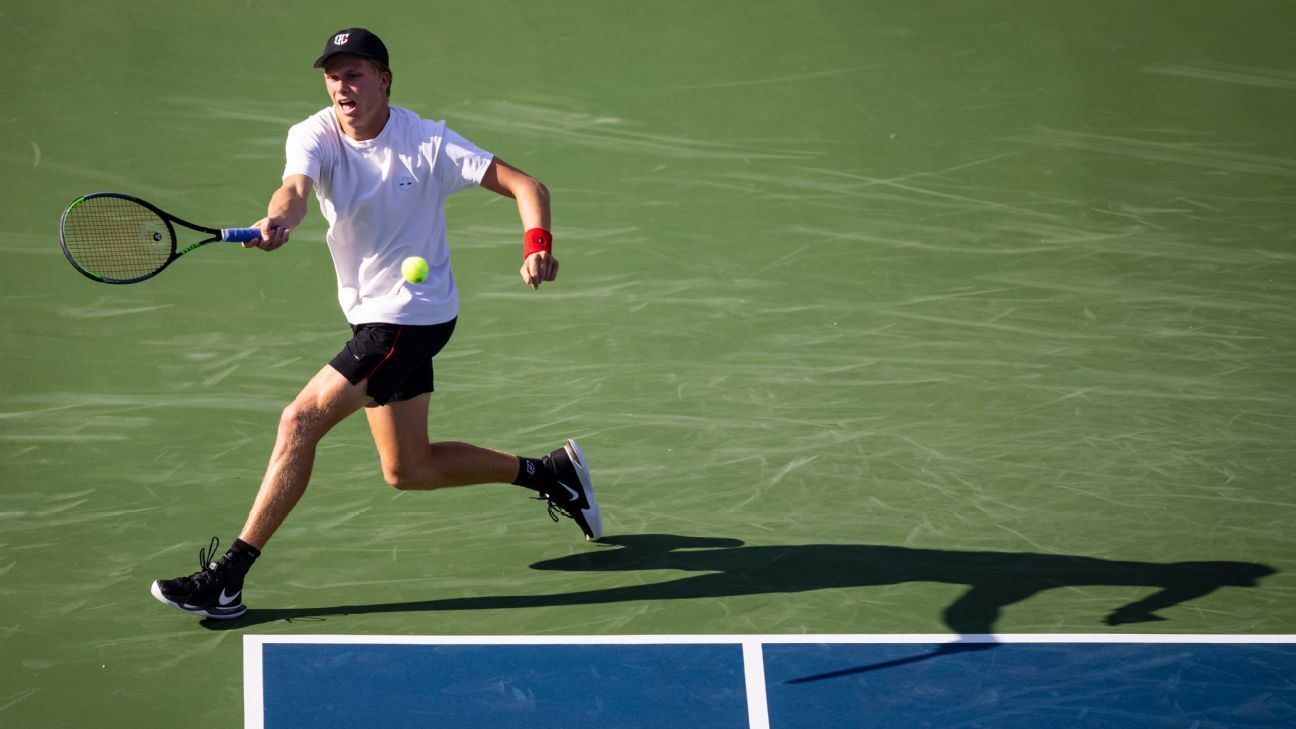 WASHINGTON — Jenson Brooksby wasn’t even supposed to play in the Citi Open at all. Now the kid’s in the final four of his first ATP 500 event.

Brooksby beat 11th-seeded John Millman of Australia 6-1, 6-2 in just 67 minutes on Friday at the hard-court tournament, making the 20-year-old from Sacramento, California, the lowest-ranked semifinalist in Washington since John Isner in 2007.

“I’m not surprising myself … (and) by now, people know what to expect, in general. But, I mean, I think I still am surprising them,” said Brooksby, who started the year outside the top 300, began the week at No. 130 after reaching the final on grass at Newport, Rhode Island, last month, and now is primed to break into the top 100. “But, I mean, within myself, I know it’s very doable, and I’m glad that I have been doing it so far.”

He has not dropped a set through four victories — three against seeded opponents, including No. 2 Felix Auger-Aliassime and No. 16 Frances Tiafoe, and another against two-time Grand Slam runner-up Kevin Anderson.

No less than a tennis authority than Andy Murray took note of Brooksby’s progress. The three-time major champion and former No. 1 tweeted, “Jenson Brooksby is the sort of player I love to watch,” praising his “variety” and “high tennis IQ.”

The other semifinal will be 2015 champion Kei Nishikori against Mackie McDonald, who has never reached an ATP final.

Anderson and Kudla originally were given wild-card entries in Washington; 20-time Grand Slam champion Rafael Nadal, the top seed who lost to Harris on Thursday night, was another recipient.

So Brooksby was in Lexington, Kentucky, competing on the lower-level Challenger Tour last week when he found out that withdrawals by others allowed Anderson and Kudla to move into the bracket on the strength of their rankings, freeing up a last-minute wild-card invitation.

Brooksby caught a flight to the nation’s capital and has displayed a game that has a bit of everything — reflex returns, a top-notch backhand, drop shots, an improving serve — backed up by a confident approach.

He likes to say that his greatest strength is having no weakness.

“I came motivated and ready to compete my butt off here and show my level consistently, as always,” he said. “I’m excited to keep proving my level and keep going out there and competing.”

This was the American’s second time facing Millman, who beat a 17-year-old Brooksby in straight sets in the first round of the 2018 U.S. Open. Millman would go on to beat Roger Federer en route to the quarterfinals.

“I’m a late grower, so I think mostly I think I have just physically improved a lot,” the 6-foot-4 Brooksby said, describing himself as “just a small guy” during that initial contest against Millman. “Now I think my game has just gotten better. I have gotten mentally stronger and definitely more physical. So it’s definitely a way different ballgame for me in general now than a couple years ago.”