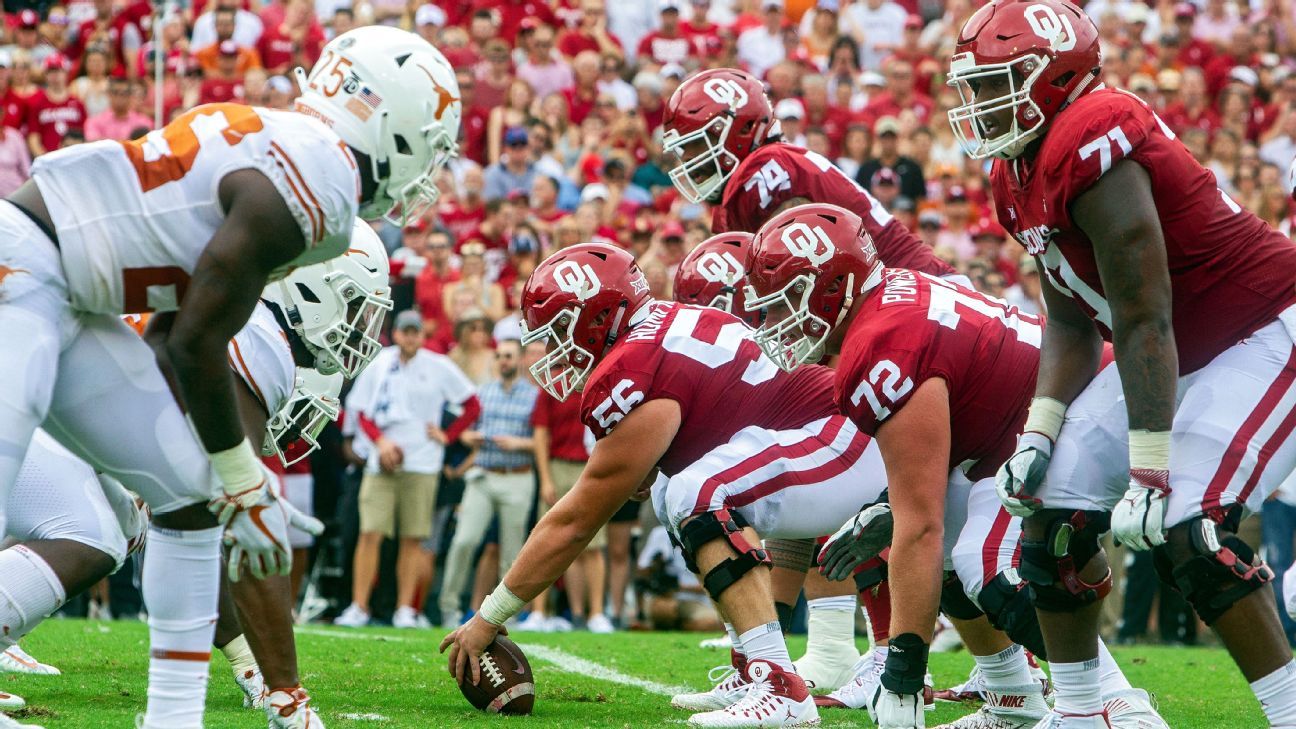 [Editor’s note: The news that Texas and Oklahoma were planning to leave the conference — which became official on Friday — was a reminder that in college football, the past is never really the past. ESPN reporters Heather Dinich, Mark Schlabach and Dave Wilson show how the roots of this decision date back to the creation of the Big 12 itself and why, this time, it reached a breaking point.]

Last Tuesday, the Big 12 conference athletic directors had the same weekly call they’ve been having since the onset of the pandemic. All 10 schools participated, along with commissioner Bob Bowlsby.

According to multiple sources on the call, Oklahoma athletic director Joe Castiglione, whose program now intends to into the SEC, volunteered to be on a committee to review the Big 12’s women’s basketball championship. The following day, the Houston Chronicle reported Texas and Oklahoma intended to leave the conference. While it’s unlikely Castiglione knew the best-kept secret in college sports was about to explode, there’s now a realization throughout the league he was part of keeping it.

“Think about how disingenuous that commitment was,” the source said. “That’s how bad this stings.”

The drama of the past week in the Big 12 that accompanied the pending departure of flagship programs Oklahoma and Texas to the SEC was an all-too-familiar position for a league in the midst of history repeating itself.

It was Dec. 22, 1994, and the league, which wouldn’t play its first game for nearly two years and hadn’t even hired a commissioner yet, was already in jeopardy. Sharks were circling as the Pac-10 was attempting to poach Colorado and flagship member Texas. Coaches and administrators reacted with shock, anger and a feeling of broken trust.

“We would hope they would see the wisdom and desirability of fulfilling the commitment we all made to each other,” Iowa State president Martin C. Jischke said at the time.

Ultimately, the Buffaloes and Longhorns stayed put, with Texas emphatic about their desire to build the new conference.

“We just are not going to do that,” said DeLoss Dodds, then Texas’ athletic director, in 1994. “We’ve got a commitment to the Big 12. It’s an ethical commitment and it’s the right thing to do.”

The Big 12 was a source of pride for Dodds, who retired at Texas in 2013 after 32 years at the helm. At his farewell press conference, he began by thanking Donnie Duncan, his friend and former counterpart at Oklahoma.

“When he was AD at Oklahoma, Donnie and I pretty much took the Big Eight and the Southwest Conference and made the Big 12,” he said that day.

Now the rivals have teamed up again, this time to bolt the conference they co-founded.

The timing of the move may seem surprising, given that Texas and Oklahoma’s TV money belongs to the Big 12 until 2025. In retrospect, though, instability has plagued the Big 12 for the past decade. It all started with Texas’ flirtation with the Pac-10 in 2010 that nearly saw a mass exodus of the league, leading to distrust, hurt feelings and a sense the league had to bow to the whims of the Longhorns — whether they were winning football games or not.

Colorado lasted 15 years before eventually jumping to the Pac-10 in 2011. Nebraska, which won consecutive national championships in 1994 and 1995 before moving to the Big 12 in 1996, also split in 2011, struggling to find its footing again in the Big Ten. Texas A&M finally found an exit hatch to escape to its dream destination, the SEC, in 2012 along with Missouri.

In many ways, this was a continuation of old grudges and bad blood that followed the teams from the SWC.

Texas and Texas A&M originally arrived in the Big 12 after 81 seasons in the Texas-centric conference amid frustration with being weighed down by smaller rivals with smaller pockets, smaller stadiums and smaller ambitions. They were joined in the new conference by Baylor and Texas Tech, who muscled their way into the life raft with help of powerful politicians.

Texas’ governor at the time, Ann Richards, was a Baylor grad. Lt. Gov. Bob Bullock held degrees from both Baylor and Texas Tech. As told by Dave McNeely and Jim Henderson, in the book “Bob Bullock: God Bless Texas,” Bullock called Texas and Texas A&M’s presidents to his office in early 1994 and told them: “You’re taking Tech and Baylor, or you’re not taking anything. I’ll cut your money off, and you can join privately if you want, but you won’t get another nickel of state money.”

The four Texas schools were leaving behind a league known for petty infighting among teams where the proximity and pride of Texas egos spilled off the field and into an expensive competition among boosters that led to a culture of finger-pointing. Their new Big Eight partners felt they brought that attitude with them from the start and didn’t take very kindly to it.

“There was a sense in the Big Eight that a rising tide lifts all ships,” Bill Byrne, the former Nebraska athletic director, told the Houston Chronicle in 2016. “We worked hard to make sure everyone succeeded and that was the culture of the Big Eight. People helped rather than taking each other down. That changed when we went into the Big 12. It was, ‘Man the lifeboats. You’re on your own.'”

Multiple sources in the Big 12 have agreed they were blindsided by the news that Texas and OU wanted out — one saying they didn’t first believe the report in the Houston Chronicle because the league had been so unified throughout the pandemic and confident in the leadership of Bowlsby and the conference presidents as they navigated through the tumultuous 2020 season.

After decades of Dodds’ influence, Texas has a relatively new power structure calling the shots. Del Conte arrived from TCU in 2017 and Kevin Eltife, a businessman and state senator, was appointed by Texas Gov. Greg Abbott as the chair of the UT system board of regents in 2018. Eltife named Jay Hartzell the new Texas president last year. Together, all three men have spoken of a new “alignment” and shared vision for the Longhorns.

“We will not take a backseat to anyone,” Eltife said on Thursday night during an alumni event in his honor in his hometown of Tyler, Texas. “And if we feel that something is in the best interest of our university, we will do our level best to go after it.”

According to the league’s first commissioner, Steve Hatchell, those competing agendas already existed. From the beginning, the Big 12 schools couldn’t even agree if they should consider it an expansion of the Big Eight or a new league entirely. The trophy, logo and league staff were all hotly debated decisions decided by split votes.

“As long as Texas got everything it wanted, things were stable,” Byrne, who later left Nebraska to be athletic director at A&M, told the Chronicle. “But when an institution — and I was at two of them — said it shouldn’t be Texas’ way or the highway, there was pushback.”

The Big 12’s revenue distribution wasn’t equal from the start. In 2011, after Colorado and Nebraska left, the now-10-team Big 12 adopted a new revenue sharing agreement that was more equitable. Baylor, Kansas State, Missouri, Kansas and Iowa State offered to contribute their shares of the estimated $30 million buyout revenue paid to the league by Colorado and Nebraska to Texas, Oklahoma and Texas A&M to keep them in the league.

“Those five institutions that were not being pursued as dramatically were looking at a very difficult future with significantly less revenue,” Dan Beebe, who served as Big 12 commissioner from 2007-2011, announced in 2010.

But the one thing that wasn’t up for sharing? The 20-year, $300 million deal from Texas’ new Longhorn Network.

“That’s never been in play, that’s not in play,” Dodds said at the time.

The Big 12 was the only major conference that allowed schools to sell their third-tier television rights, which is how Texas created the LHN. Oklahoma partnered with a regional network to create the Sooner Sports Network. Every league school had the same opportunity to sell theirs, they just couldn’t command the money those two -especially the Longhorns – could. The remaining eight schools eventually pooled their third-tier rights in a partnership with ESPN+ for $40 million a year split between them beginning in the 2019 season. But still, the league was left as the only Power 5 conference without its own network. That’s at the heart of where we are today. The same problems — smaller schools being subsidized by bigger schools — that ultimately plagued the SWC still existed in the Big 12.

But Dodds was never shy about what the Longhorns brought to the table or what the marketplace brought to them. In 2011, during the middle of another round of turbulence in the league with Texas A&M seeking to move to the SEC, he spoke to the McCombs School of Business at Texas and updated them on the state of college sports negotiations, leading with the Pac-12’s new TV deal, which was worth about worth $225 million annually, with each school expected to receive $21 million a year.

From the courtroom to the course, everything you need to know about the FedEx Cup playoffs
Sources: Wilder, Helenius finalizing October fight
Medvedev arrives in Montreal ‘hungry for victories’
Pumas vs. Wallabies: Is JOC’s experience enough?
2022 NHL offseason: Grades on biggest deals, including Pacioretty, Tkachuk, Burns