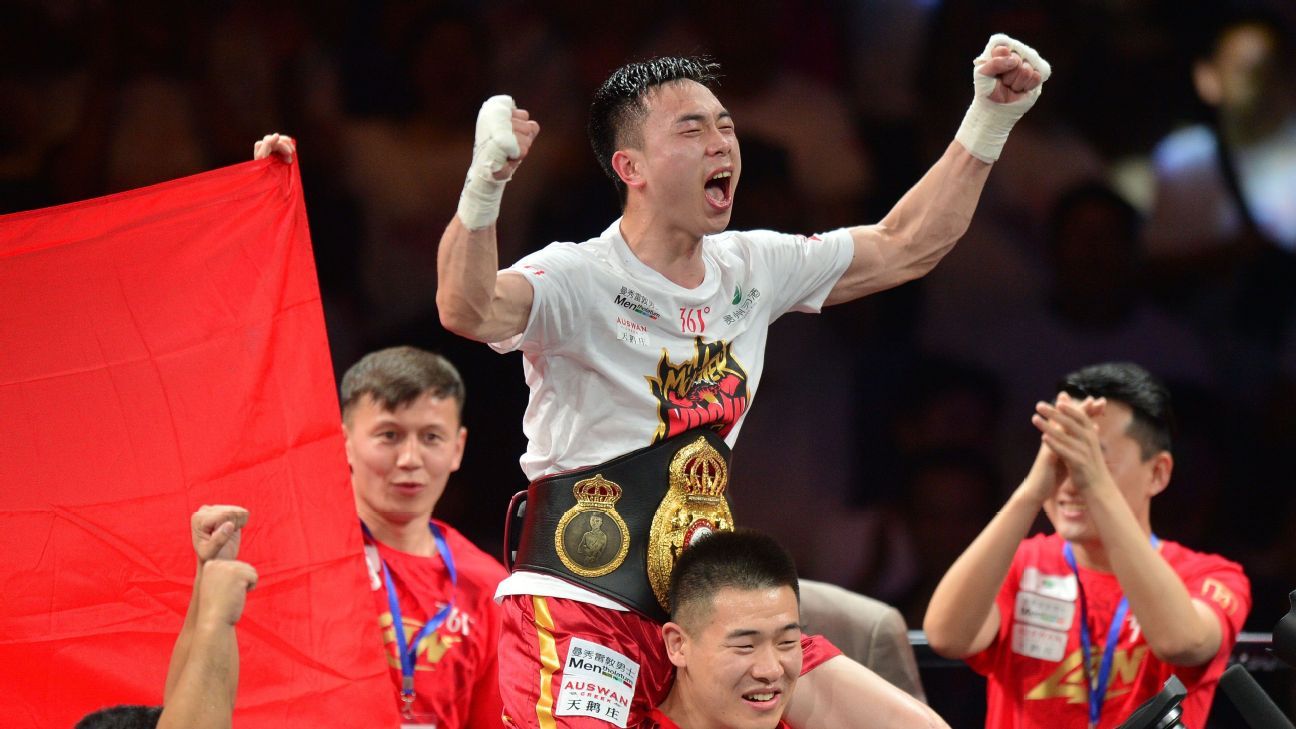 China isn’t known as a boxing hotbed, but there is one fighter from the world’s most-populated nation who is making noise: Xu Can.

The 126-pound volume-puncher — ESPN’s No. 2-rated featherweight — was lined up for a title tilt with Josh Warrington in the spring before the Brit was shocked in a brutal TKO loss to Mauricio Lara. The rematch between Lara and Warrington is set for Sept. 4, but in the meantime, Can will fight Saturday against another Englishman in Leigh Wood in Brentwood, England.

The fight will now be the main event of the return of Eddie Hearn’s Matchroom Fight Camp, after welterweight Conor Benn tested positive for COVID-19 on Thursday morning and his fight against Adrian Granados was postponed.

Here are a few things you should know about the WBA “regular” featherweight titleholder:

Can is the youngest champion in China’s history

Yes, he’s the WBA’s secondary champion at 126 pounds, but it’s the rare instance where the “regular” champion should be recognized as the organization’s only titleholder. The WBA has a bad habit of designating two champions in many divisions, and featherweight is no exception. But it’s about time Can is elevated. That’s because Leo Santa Cruz, a division stalwart, hasn’t competed at 126 pounds since February 2019; Santa Cruz’s last two bouts were contested at 130.

Can won his version of the title when he defeated contender Jesus Rojas in January 2019; he was two months shy of his 25th birthday. He successfully defended that belt four months later with a sixth-round TKO of Shun Kubo, a homecoming fight in Fuzhou, China.

Can successfully defended the title again in November 2019, a fight where he threw an astonishing 1,562 punches — a CompuBox record in the storied featherweight division

The 1,562 shots in a 12-round win over Manny Robles III was also the sixth-most punches in the history of CompuBox.

That bout was the only boxing title fight ever between an American and a Chinese boxer, a bout where Can showed why he’s called “The Monster.” Besides the incredible cardio that allows him to throw non-stop punches, Can possesses impressive strength on the inside. It’s a trait he hasn’t been able to show against elite opposition yet, but that could change soon.

The 27-year-old resides in Beijing, but he trains in Miami with Pedro Diaz, the former director of the renowned Cuban National Team

It’s been a 20-month layoff for Can, but he believes the extra time working with Diaz, one of the sport’s best trainers, will pay dividends on fight night.

“In the past five months in Miami, my coach Pedro Diaz has worked me very hard,” Can said. “This is by far the best preparation for my title fights. I feel that I am in an excellent status, physically and mentally.”

The fight with Wood will be Can’s debut in England, and Wood will of course have the benefit of fighting in his own backyard (well, Hearn’s backyard, at least — literally). Can has competed outside of China four times, with three bouts in the U.S., and the fourth in Australia.

Since two defeats in his first four fights — a four-round split decision and a six-round majority nod — Can has been undefeated.

Make your picks and compete for a chance to win $5,000! Make Your Picks

Rojas was by far Can’s best opponent, and against him, “The Monster,” was able to unload 1,245 shots. Against fighters below the elite level, pure volume punching is usually enough to overwhelm an opponent. There’s no doubting Can’s conditioning. But he hasn’t shown much pop, with just three knockouts in his 20 pro fights.

Considering the sheer amount of punches he’s throwing, it’s not all that surprising; it’s rare for volume punchers to sit down on their shots when unloading their hands non-stop.

Wood isn’t likely to test Can, either, but he figures to be the second-best foe of Can’s career to this point. Can is a -340 favorite, per Caesars Sportsbook by William Hill, to turn back Wood and move onto bigger fights. And if Warrington can exact revenge against Lara, it’s likely a matchup between Can and Warrington will be revisited.