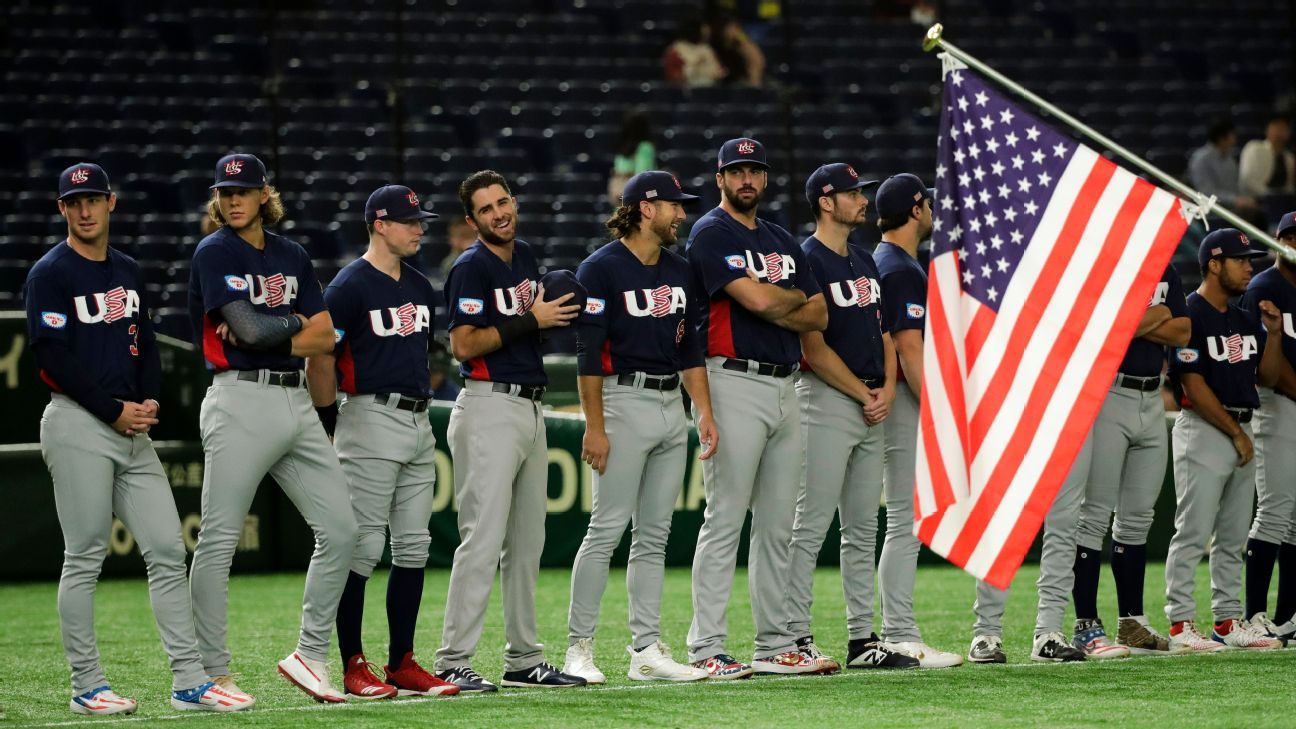 The Olympics have always had a love-hate relationship with baseball. In the early decades of the games, host cities organized various exhibitions, including a contest in 1956 in Melbourne that drew 114,000 spectators, but it wasn’t until 1984 in Los Angeles that we saw the first Olympic baseball tournament, although it wasn’t an official sport.

The United States, fielding a team of college players that included Mark McGwire, Barry Larkin, Will Clark, B.J. Surhoff and Bill Swift, played before sellout crowds at Dodger Stadium, but lost 6-3 to Japan in the first-place game. Baseball was again a demonstration sport at the Seoul games in 1988, with another team of U.S. collegians beating Japan 5-3 in the first-place game behind Jim Abbott’s complete game and Tino Martinez’s two home runs. Medals were awarded, but weren’t counted in each nation’s medal totals.

Baseball finally became an official Olympic sport in 1992 and was conducted in each Olympics through 2008 — Cuba won gold in 1992, 1996 and 2004, the U.S. in 2000 and South Korea in 2008 — but was then dropped (along with softball) in 2012 and 2016. The IOC’s rationale was the two sports didn’t feature enough worldwide participation and that, in baseball’s case, the best players weren’t participating. The U.S. had upgraded from college players to minor leaguers, but the IOC still axed the sport for the London and Rio games.

Baseball and softball are now back, at least for Tokyo, as two of five sports the Tokyo Organizing Committee deemed “event-based” and added to its program. After various qualifying tournaments, six countries will participate, scaled down from an eight-team tournament in 2008. Here is a rundown of what to watch for in the tournament and some key players.

The six teams are divided into two pools for group stage play.

Starting July 28, each team plays games against the other teams in its group. The teams then feed into a double-elimination bracket of sorts (with the two third-place teams first facing each other in an elimination game). The gold-medal game will be played Aug. 7 at Yokohama Stadium — in front of empty stands, as will be the case for the entire Olympics after Japan announced a COVID-19 state of emergency in early July.

For players affiliated with MLB teams, only players not on 40-man rosters were allowed to participate, so the U.S., Mexico and Dominican Republic teams are a mix of younger prospects, former major leaguers or veteran minor leaguers. The Japanese and Korean professional leagues, however, are shutting down their leagues to allow their best professionals to compete.

United States: Manager Mike Scioscia rolls out a team that combines big league veterans like Todd Frazier, Scott Kazmir, Edwin Jackson and David Robertson with prospects like Oakland A’s shortstop Nick Allen, Boston Red Sox first baseman Tristan Casas, Toronto Blue Jays pitcher Simeon Woods Richardson, Tampa Bay Rays pitcher Shane Baz and new Minnesota Twins pitcher Joe Ryan. Frazier has become the de facto team captain, and while he and Kazmir appeared in the majors this season, the younger guys are the players to watch. Baz might be the pitcher you want to start against Japan, as he has a 2.26 ERA between Double-A and Triple-A, with 82 strikeouts in 55.2 innings. Ryan, just traded from the Rays to the Twins, is also in Triple-A, where he has 3.63 ERA with 75 K’s in 57 innings. Don’t be surprised to see both in the majors later this season.

The best hitter on the team might actually be Tyler Austin, who spent parts of four seasons in the majors from 2016 to 2019. He has been one of the top sluggers in Japan’s Central League, hitting .314/.413/.603 with 19 home runs. One of the coolest stories of the Olympics is infielder Eddy Alvarez, who was one of the flag bearers for the U.S. during the opening ceremony. He won a silver medal at the 2014 Winter Olympics as part of the 5,000-meter short track speedskating relay team. He appeared in 12 games for the Marlins last season and will become the rare athlete to compete in both the Winter and Summer Olympics. While Japan is the favorite, the U.S. certainly has a chance. It will be interesting to see if Scioscia ends up relying more on the veteran pitchers or the prospects.

Japan: Masahiro Tanaka is the name familiar to MLB fans. Tanaka returned to Japan this season and is pitching for Rakuten, where he has posted a 2.86 ERA in 13 starts. He might not be the ace of the staff, however. Koyo Aoyagi leads the Central League with a 1.79 ERA and Masato Morishita is second at 2.29, while Yoshinobu Yamamoto (1.82) tops the Pacific League.

On the offensive side, 27-year-old outfielder Masataka Yoshida is the player to watch. He leads the Pacific League with a .343 average and .989 OPS and has 46 walks and just 19 strikeouts. Fellow outfielder Yuki Yanagita is the top slugger as he leads the Pacific League with 22 home runs while hitting .296. Japan’s pitching depth certainly makes it the gold-medal favorite, although the empty stadiums remove some of the home-field advantage it would have otherwise held.

Mexico: The big name here is five-time All-Star first baseman Adrian Gonzalez, who last played in the majors in 2018. He is 39 and has been playing for Guadalajara in the Mexican League, where he’s hitting .340/.412/.531 with six home runs in 43 games. The pitching staff includes several former major leaguers, including Oliver Perez, who made five appearances earlier this season for Cleveland. Others with MLB experience include Fernando Salas, Hector Velazquez, Manny Banuelos and Sammy Solis. The familiar infielders include Danny Espinosa and Ryan Goins. Mexico qualified when it upset the U.S. in the 2019 Premier12 tournament (the U.S. subsequently qualified earlier this year in a different tournament), so don’t discount Mexico’s chance to surprise.

Dominican Republic: Most of the top Dominican talent is locked up in the U.S. major leagues or minors, but the Dominican Republic has managed to field an interesting team. The headliners are Jose Bautista, who last played in the majors in 2018, and Mariners outfielder Julio Rodriguez, one of the top prospects in the minors. Melky Cabrera and Emilio Bonifacio are recognizable names, but the pitching is thin, relying on former major leaguers like Jumbo Diaz, Dario Alvarez and Jairo Ascencio. With the lack of pitching depth and reliance on some past-their-prime hitters, the Dominicans are long shots.

South Korea: Drawing from its topflight professional league, South Korea is a strong medal favorite with one vital additional incentive: Military service is mandatory for all male citizens, but the government waives that requirement for gold-medal winners. South Korea is the defending Olympic champion — Hyun-Jin Ryu beat Cuba in the gold-medal game in 2008 — but its pitching staff isn’t considered as strong this time around, with several of the top Korean hurlers — like Ryu and Kwang Hyun Kim — now pitching in the major leagues.

Leading the way will be veteran catcher Eui-ji Yang, a longtime star in the KBO who is hitting .348 with 20 home runs and leads the league with a 1.111 OPS. Outfielder Hyun-Soo Kim has been a staple of Korean teams in international tournaments — you might remember him from his brief time with the Baltimore Orioles and Philadelphia Phillies — although his numbers have dropped off this season (.288, 12 home runs). First baseman Baek-ho Kang turns 22 in a couple of days but is already one of the best hitters in the KBO, leading the league with a .395 average with 10 home runs. Tae-in Won, a 21-year-old right-hander who tops the KBO with a 2.54 ERA, figures to be the team’s ace, but the staff will rely heavily on its bullpen, which includes a couple of relievers who throw in the upper 90s in Sang-woo Cho and Wook-suk Ko.

Israel: Israel was the surprise winner of the 2019 Europe/Africa qualifying tournament, beating the favored Netherlands squad. The team roster consists almost entirely of U.S.-born players, including four-time All-Star Ian Kinsler, who last played in the majors in 2019. Infielders Danny Valencia and Ty Kelly also have big league experience, as does catcher Ryan Lavarnway. Among the more experienced pitchers are Jake Fishman (3.86 ERA in Triple-A for the Marlins this year), Alex Katz (6.68 ERA in the minors for the Cubs), plus former major leaguers Josh Zeid, Zack Weiss and Jeremy Bleich.

One of the more interesting aspects to the Olympic tournament will be the strict clock and pace-of-play guidelines. A 20-second pitch clock is utilized when no runners are on base. Pitchers get one warning and are then penalized with a ball rewarded to the batter. Batters, meanwhile, must keep one foot in the batter’s box between pitches. There is also a 30-second clock for a coach’s or manager’s visit to the pitcher’s mound, and a 90-second clock for pitching changes and between innings.

Anyway, the scaled-down tournament and lack of fans will make this a lot less interesting, plus the World Baseball Classic has surpassed the Olympics as the top international tournament. Still, in baseball-mad Japan it will be a big deal with plenty of eyeballs watching on TV and there will be a lot of pressure on the home team to win gold. Anything can happen in a short tournament where it will come down to one game, but Japan feels like the easy pick here.