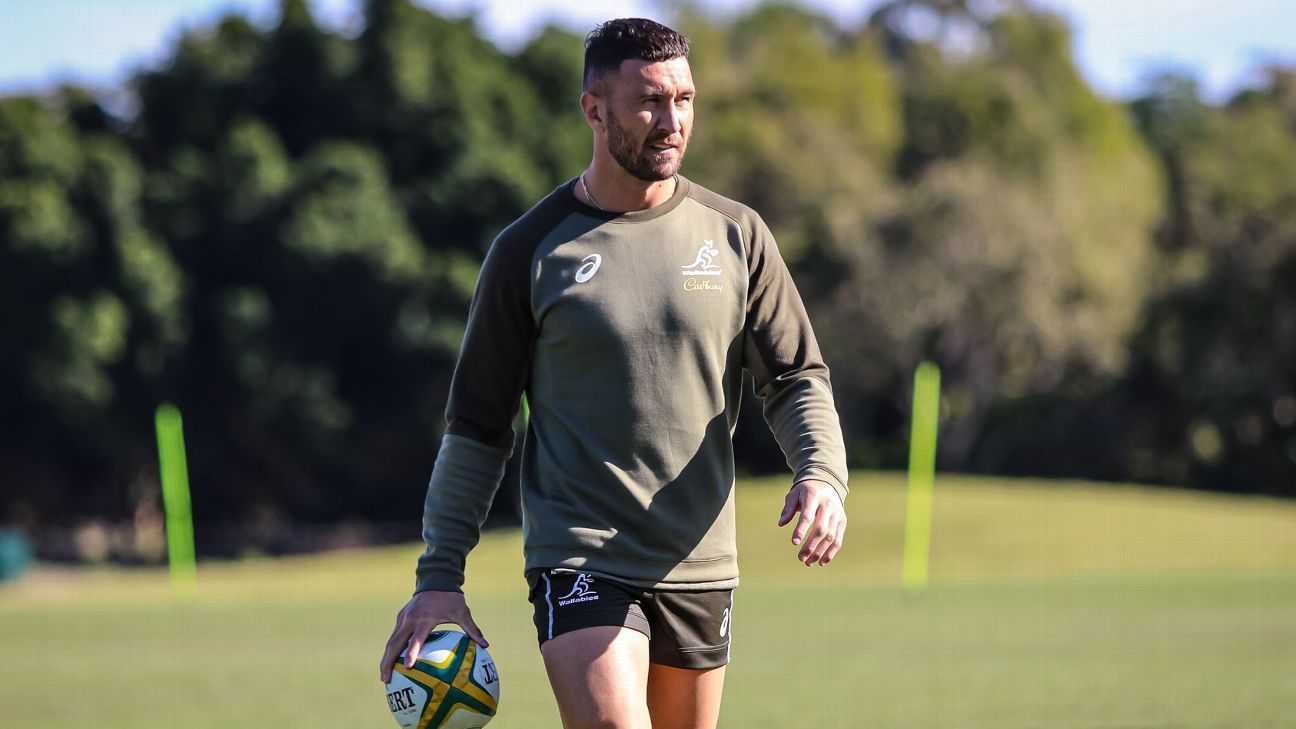 Quade Cooper could be just one injury away from a shock return to Test rugby after he rejoined the Wallabies for the first time in four years, with coach Dave Rennie saying the veteran playmaker will have the chance to push for selection by how he trains over the next few weeks.

News of Cooper’s return to the national fold broke on Sunday night, his addition to an already 42-strong Wallabies squad for the Bledisloe Cup resulting from a catch-up coffee that followed an exchange of text messages where the fly-half merely made himself available to help out at training.

But James O’Connor’s ongoing battle with a groin injury, and the border closures brought about by the COVID-19 outbreaks in Sydney and Melbourne, have changed the Wallabies’ thinking and created a situation where Cooper could see Test action once more, despite him likely being the fourth option behind Noah Lolesio, Reece Hodge and Matt To’omua.

Whatever the course of the next few weeks, Cooper is nonetheless relishing the opportunity to mix with a Wallabies group that looks very different to that from his early years in the Test arena.

“I probably didn’t ever expect to be in this position [again] so I’m very grateful for the opportunity and to be back in this environment,” Cooper told reporters via Zoom on Monday. “I guess it’s just one of those things, you continue to work away and try and grow each day, and then an opportunity like this has presented itself and it’s just a matter of making sure you’re available and you’re ready.

A Bledisloe Cup showdown at the Wallabies’ Eden Park graveyard on Saturday week is what’s next for Australia, with Rennie confirming that the Auckland Test on Aug. 7 and the Perth clash a fortnight later are all but locked in.

But it looks unlikely that the Wellington Test on for Aug. 28 can proceed as planned, and it cannot be played in the New Zealand capital between the Auckland and Perth encounters because of a pre-existing booking at Sky Stadium.

Whether an alternative venue in New Zealand hosts what would be the second Bledisloe on Aug. 14 or Wellington stages the third Test after the Rugby Championship, is a point of ongoing discussion for officials on both sides of the Tasman.

On the field, Lolesio is considered a certain selection for Eden Park following a succession of solid performances against France, while Hodge and To’omua both came off the bench in the series-clinching win over the Europeans.

The presence of the Rebels duo either in a starting capacity or among the replacements means Cooper is highly unlikely for Auckland, but should injury strike any of those players at Eden Park one of the most surprising Test comebacks in recent memory could be on in Perth.

“Noah’s started the last three Tests so it’s fair to say he’s No. 1,” Rennie explained. “Quade’s job is to come in here and influence us as selectors, likewise with Matt and with Reece, [the latter] who gives us great utility value and played 79 minutes on wing last Test.

“We’ll judge on what we see each day and who ends up starting or backing up will be based on guys earning the right to wear the jersey. So it’ll be based on how they train.”

When catching up with Cooper last week, Rennie said he had stressed the importance of the character he is trying to build within his Wallabies.

With Cooper having had his fair share of miss-steps earlier in his career, Rennie believes the now 33-year-old has plenty to offer his young Wallabies squad from a mentoring perspective.

“He’s learned a lot through those experiences and matured,” Rennie said of Cooper. “Very similar to James O’Connor in fact. My knowledge of Quade, my knowledge of James, was mostly through the media. I’d coached against both those boys, respected them as players, so it’s been good to get to know them.

“So certainly the conversation we had last week, I talked a lot about the importance of character in this group. We’ve got a young group of men who are impressionable and really need Quade to come in and be a positive influence. And as you can tell from how he’s spoken today he’s highly motivated.

“We saw him running around this morning and he looked as sharp as ever to me, and I think even his voice, the direction he’s giving some of our players, it was really positive. So I’m excited about how he can add to the group.”

Cooper has stayed in shape since the end of his Japanese season at Kintetsu Liners, training both in the gym and out on the paddock; his on-field work coming alongside his younger brothers’ rugby league preparations.

The 70-Test veteran can certainly offer Lolesio advice when it comes to being an opposition playmaker, as a youngster in New Zealand, after he was declared public enemy No. 1 as a 23-year-old at the 2011 World Cup across the ditch.

But Cooper also says he can learn a thing or two from a player he says is a “phenomenal” talent.

“I think that we can continue to help each other,” Cooper replied when asked about Lolesio. “Even myself at 33, I’m here trying to learn, trying to soak up as much information as I can. And watching the way he [Lolesio] went through those Test matches, he’s a phenomenal player, and I know he’s going to be a great player and a great asset to Australian rugby.

“His composure at the end of those Test matches, to be able to nail those kicks at goal, that already shows a steady resolve in the kid. And just being able to spend the day out here with him today, he’s a guy that’s just so eager to learn, has a strong head on him and looks to be great leader in the No. 10 jersey.

“So I’m excited to be able to work with him and just learn as much as I can as well.”