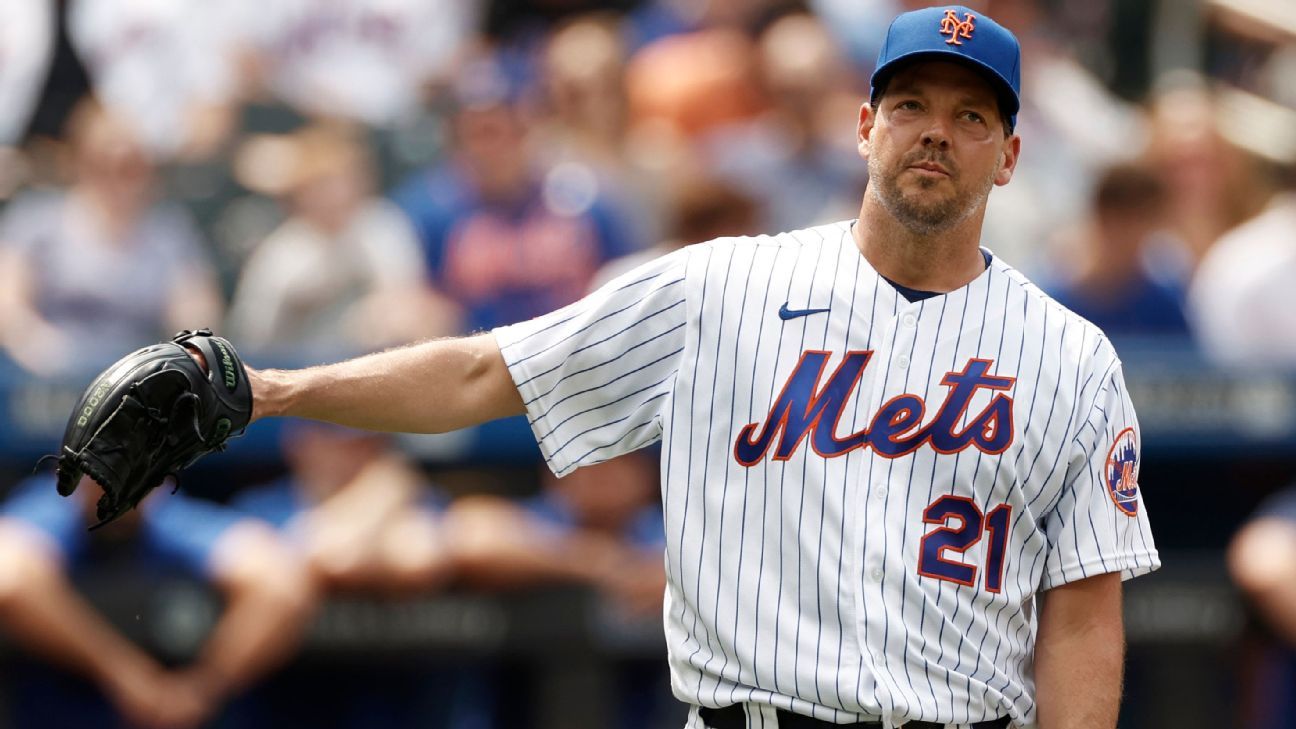 Alonso homered again, McNeil broke a tie with a pinch-hit, two-run double and the Mets beat the Toronto Blue Jays 5-4 on Sunday in Hill’s successful debut.

Acquired from Tampa Bay in a trade Friday, the 41-year-old lefty stepped right into New York’s injury-thinned rotation and delivered for the NL East leaders.

“Today was a great win and I was happy that I was able to contribute,” Hill said.

Five relievers followed him and held Toronto to one run over four innings. Edwin Diaz struck out three in a hitless ninth, fanning cleanup batter Bo Bichette on a full-count slider with a runner on second for his 21st save.

Hill threw only 49 pitches over the first five innings and worked around three leadoff doubles, taking a four-hit shutout into the sixth before running into trouble the third time through Toronto’s power-packed lineup.

The veteran curveballer, pitching for his 11th team in 17 major league seasons, let the first three hitters reach in the sixth and was removed. He walked off the mound with the bases loaded to a warm ovation from the Citi Field crowd of 23,675.

“It was a crazy couple days,” said Hill, whose wife and son are still in Tampa, Florida. “It’s kind of a whirlwind.”

Seth Lugo (3-1) allowed all three inherited runners to score, two on Bichette’s two-run single, as the Blue Jays took a 3-1 lead. But then Lugo limited the damage, and Alonso tied it in the bottom half with a two-run drive off reliever Ryan Borucki.

The slugger looked at teammates with palms up as he began rounding the bases, and playfully celebrated by carrying the club’s stuffed home run horse through the dugout.

Alonso hit three homers to help New York take two of three in the series. He has five home runs since the All-Star break, when he repeated as Home Run Derby champion.

“I don’t know if the derby played a role in it, but he’s very, very confident right now,” Mets manager Luis Rojas said.

McNeil gave New York a 5-3 lead later in the inning and extended his hitting streak to a career-high 12 games with a shot to right-center off Jacob Barnes (1-2), traded by the Mets to the Blue Jays last month.

Toronto trimmed it to 5-4 in the eighth on an RBI single by Teoscar Hernandez off Trevor May, who combined with Aaron Loup to escape a bases-loaded, one-out jam. Loup retired Cavan Biggio to end the inning.

J.D. Davis doubled for the Mets in the second and scored on Jonathan Villar‘s single.

Toronto stranded nine runners, finished 14-4 in interleague play this season and fell to 2-14 against the Mets in Queens.

“It’s funny ’cause when you see a guy like Rich Hill, it looks like you should be able to hit him. But that’s what he does,” Blue Jays manager Charlie Montoyo said. “He’s a good pitcher and he keeps guys off balance and he makes big pitches when he has to.”

Hill became the second-oldest pitcher to make his Mets debut behind Hall of Fame lefty Warren Spahn, who was 43 in 1965.