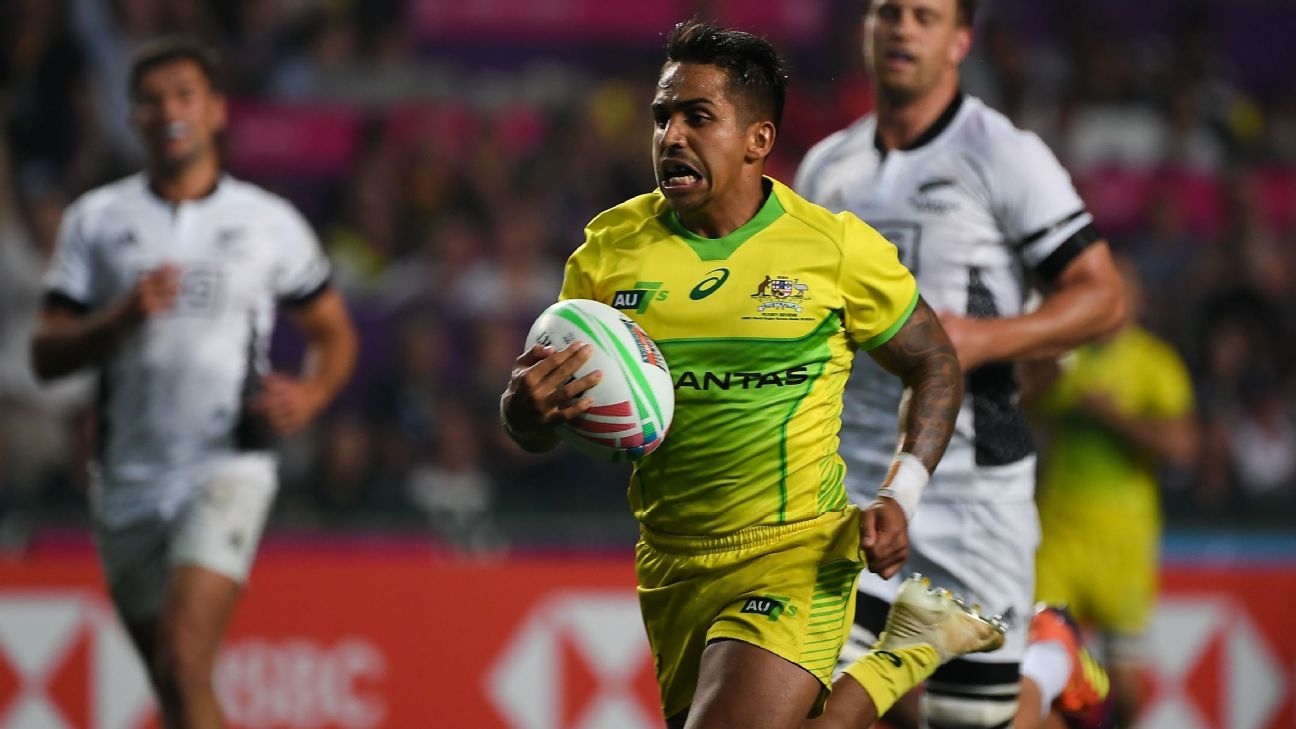 Longbottom is set to be one of the stars of the Olympic Sevens program, which begins on Monday in Tokyo, despite missing Australia’s final warm-up event in Townsville just a few weeks ago.

A key member of Tim Walsh’s 12-man squad, Longbottom had become a feature talent of the World Series circuit before, like so many other sports around the globe, it was brought to a screeching halt by COVID-19 last year.

But his transition from suburban rugby league player to sevens star wasn’t always guaranteed, former Australia Sevens coach Andy Friend revealing that while Longbottom’s ability was obvious, a significant amount of work was needed to build him up mentally.

“A lot of Moz [Longbottom] was actually his confidence, believe it or not, he didn’t think he was good enough,” Friend, who coached the Australia Sevens team between 2016-18, told ESPN. “He had major anxiety issues around ‘was he worthy’ and ‘could he actually go and do it’, because I think his whole life he had been told that he was too small and that he wasn’t good enough and he wasn’t going to make it.

“But I think his breakthrough was when we went to Munich [in 2017], we ended up winning that tournament by beating Fiji in the final; he was just unbelievable in that tournament. So my job with Moz, or the way I worked with him, was just to try and give the fella confidence and say ‘mate, you actually are incredible’.

“And along with that, working with Nick Poulos, who was our head of athlete performance at that time, building up his stamina, building up his ability to survive a tournament because the fitness in sevens, on the world circuit, it’s another level. So a lot of work went into Moz from Nick’s area and the athlete performance area; most of my stuff was just giving the bloke the confidence to go and be as good as he could be.”

Friend was at the helm of Australia when rugby returned to the Olympic fold in 2016, his stint ending after the 2018 Commonwealth Games on the Gold Coast with Rugby Australia [RA] deciding to move gold-medal winning women’s coach Walsh into the men’s program.

But it was evident that the playing group were deeply disappointed by RA’s decision.

To his credit, Friend accepted his fate and bowed out with the respect and adoration of his playing group, his tenure ending with a fifth-place finish at the Commonwealth Games on the Gold Coast.

In talking to reporters at the conclusion of that program in Queensland, Friend spoke of Longbottom’s growth since his introduction to the program and called on RA to seek out more First Nations talent to join his star impact player and fellow Indigenous team members John Porch and Dylan Pietch.

Three years on, despite a national search to unearth that talent, Friend is disappointed to see only Longbottom and Pietch flying the First Nations flag for the Australian men in Tokyo.

Asked whether Longbottom starring on the Olympic stage could help, Friend replied: “I hope so, mate.

“I thought Jarred Hodges did an incredible job with his #dreamBIGtime [program], he unearthed an enormous amount of Indigenous talent when he went touring around the countryside. But I was watching the Townsville action [the Oceania Sevens series] and I didn’t see many Indigenous players in that Oceania squad. They’re there, you’ve just got to be brave enough to pick them.

“I don’t know what it is about the people who are selecting the team at the moment, they just don’t seem to be looking in that area, which is a real shame, because as I’ve said previously and I still standby, it’s that Indigenous players from this country are made for sevens.

“It’s instinctive, it’s elusive, it’s fast, it’s all those things, and as a testament with Maurice Longbottom and Jonny Porch and Dylan Pietch, they’re incredible at it.”

RA’s #dreamBIGtime program was suspended amid the coronavirus pandemic last year as the governing body struggled to manage the financial implications created by COVID-19. An RA spokesperson told ESPN talks are ongoing to bring it back in some capacity, but that the organisation’s tenuous financial position is proving a significant hurdle to various pieces of long-term planning.

Meanwhile, the game of sevens itself might appear little more than organised chaos, but Friend said there was far more to it than might originally meets the eye.

With games running just 14 minutes in length, there is little room for error and even less for incidents of foul play, so too cynical offences like throwing the ball away following a penalty or the deliberate knock down of an opposition pass.

Strategically, the biggest point of difference when preparing for opposition teams comes at the restart of play.

“You’ve got your base game structure, and that won’t change, but certainly you will change where you’re going to do your kick-offs or where you think they’re going to kick to you, so the pods that you’re going to put out; that’s a crucial part of the game, who can dominate that restart area,” Friend explained.

“So you’ll have different tactics for different teams on that, both on your kick and also receiving the opposition’s kick. And then some of the other basics things are your scrum options, your lineout options, where you think you can expose them and that’s basically a lot of scouting and a lot of analysis done on the opposition.

“Defence is pretty standard, there might be a couple of teams that you have to adjust your width and your speed that you’re going to go up at, depending on what they’re doing. But there actually is a lot to it, and I fell a love with the game, I just thought it was brilliant. Tactically and technically, everything is under pressure and everything happens so quickly, and one little error can really unravel a game for you.”

Such is the depth of competition across the men’s draw, it is only really South Korea who do not appear capable of winning a medal.

Fiji, New Zealand and South Africa have traditionally dominated the World Series, but each of Australia, the United States, Argentina, and England, who make up a large chunk of Great Britain’s team in Tokyo, and hosts Japan, are all capable of mixing it with the sport’s big guns in Tokyo.

Still, Friend said that when defending Olympic champions Fiji get on a roll there is no team that can hang with them.

“Once they get the confidence, it’s very very hard [to stay in the game],” Friend told ESPN. “We had limited success against them but the times we did have success was when we physically fronted up to them and actually stung them in a couple of good hits or ran over the top of them and double-teamed them at the breakdown. It took away their confidence.

“But once they get on a roll it’s like chasing rabbits. I was on the receiving end of a few of those performances; you felt like you’re in the game and then all of a sudden within the space of a few minutes and 21 points have been scored against you and you think to yourself ‘what the hell just happened there?

“They are phenomenal but again not to dissimilar to our Indigenous boys; the Indigenous race don’t have the physicality or the size of the Fijians but they have the guile and the gamesmanship, and they are certainly pretty special out there. But Fiji is certainly the team to beat.”