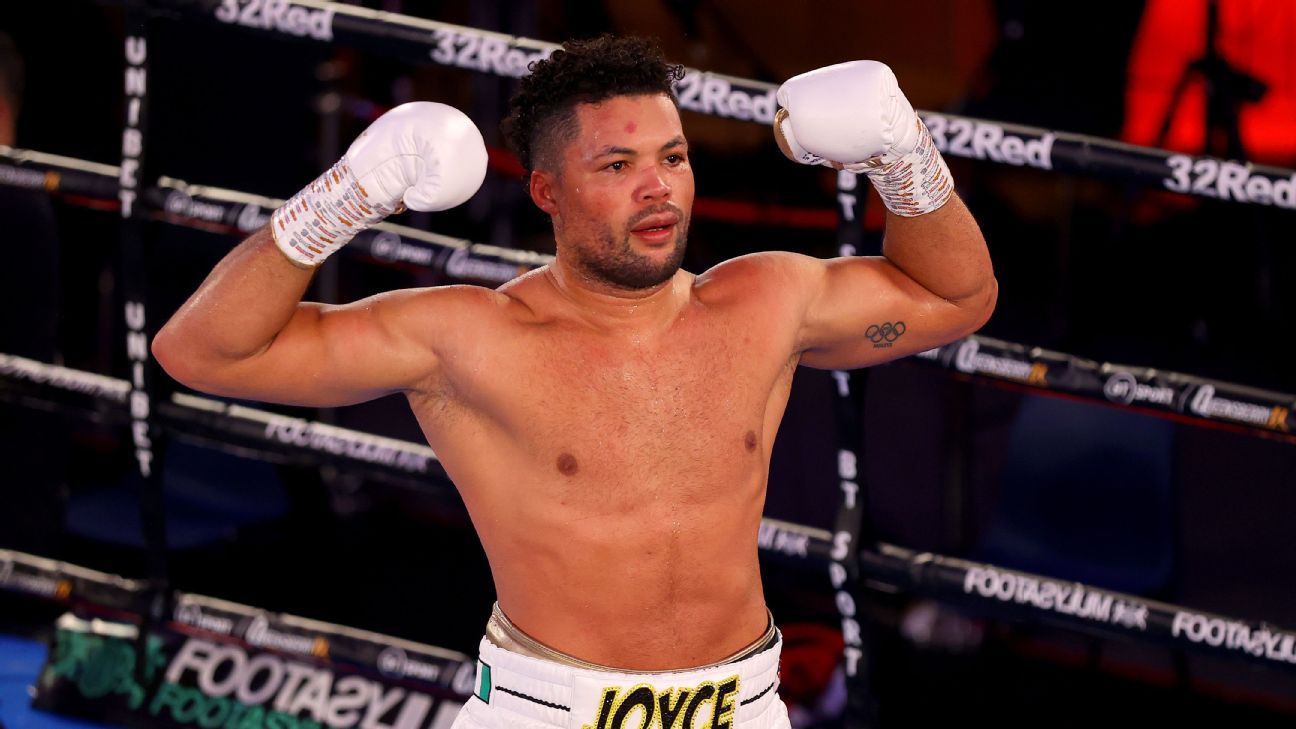 Joe Joyce took a big step toward a world heavyweight title shot with a sixth-round stoppage win over Carlos Takam in London on Saturday.

Joyce produced a clinical finish to see off Takam and maintain his place as the WBO’s leading contender behind Oleksandr Usyk, the Ukrainian who will get his overdue mandatory shot at world heavyweight champion Anthony Joshua on Sept. 25.

Joyce said he wants the winner of that fight.

But Joyce (13-0, 12 KOs), 35, from Putney in London, struggled to get to grips with Takam until early in the sixth round, when he took command. Takam, who is five years older and five inches shorter than Joyce, caught him numerous times before the English boxer launched an ambush with his first punches of Round 6.

On paper, it was another stoppage win for “Juggernaut” Joyce, after he knocked out English rival Daniel Dubois in 10 rounds in November. But Joyce took some heavy shots in the early rounds and could not pinpoint his shorter opponent.

“He hit me with some good shots,” Joyce said. “I worked him out and where to land. I had to take my opportunity when he came. I’m pretty tough. I weathered the storm and came back.”

For Cameroon-born, Nevada-based Takam (39-6-1, 28 KOs), this was another defeat in the United Kingdom after being stopped in 10 rounds by Joshua when he stepped in as a late substitute opponent for the WBA, IBF and WBO world title fight in 2017.

A year later, Takam was beaten by Dereck Chisora in the UK, but he then rattled off four successive wins after moving from France to the United States and arrived in London full of confidence.

Takam gave Joyce early warning of his appetite and danger when he finished the first round firing right hands on the front foot.

Joyce tried to establish his authority behind his jab in the second round, but once again it was Takam who finished the session stronger with two heavy right hooks.

Takam repeatedly found holes in Joyce’s defense despite the height difference. At 40, Takam showed impressive energy and ambition while Joyce struggled to get his jab going.

However, Joyce burst to life at the start of the sixth round, stunning Takam with a left hook. Joyce seized his chance with Takam dazed and launched a sustained assault. When Joyce rocked Takam back on his heels with his right hand, referee Steve Gray stepped in to stop the fight 49 seconds into the round.

Takam was unhappy with the stoppage, but he was not throwing back punches and was on wobbly feet.

Joyce might have to wait until next year for his shot, with the winner of the Joshua-Usyk fight likely to pursue a title unification bout following the Oct. 9 clash between WBC champion Tyson Fury and Deontay Wilder. However, if the winner of Joshua-Usyk decides to give up the WBO belt to make a fight against the victor of Fury-Wilder, then Joyce would fight for the vacant WBO title in his next bout.

“He’s the mandatory challenger, No. 1 now to the winner of Joshua-Usyk,” promoter Frank Warren said. “Provided AJ wins and Tyson wins, they will fight next and [Joyce] will fight the winner.”

Gauff bests Osaka in straight sets in San Jose
Welbeck penalty, McTominay’s non-red card explained in The VAR Review
How to watch the PGA Tour’s Wyndham Championship
The greatest NFL defenders ever: We picked the GOAT at each position, from LT to Prime Time
Asia Cup 2022 Full Schedule, Date, Timings And Venues