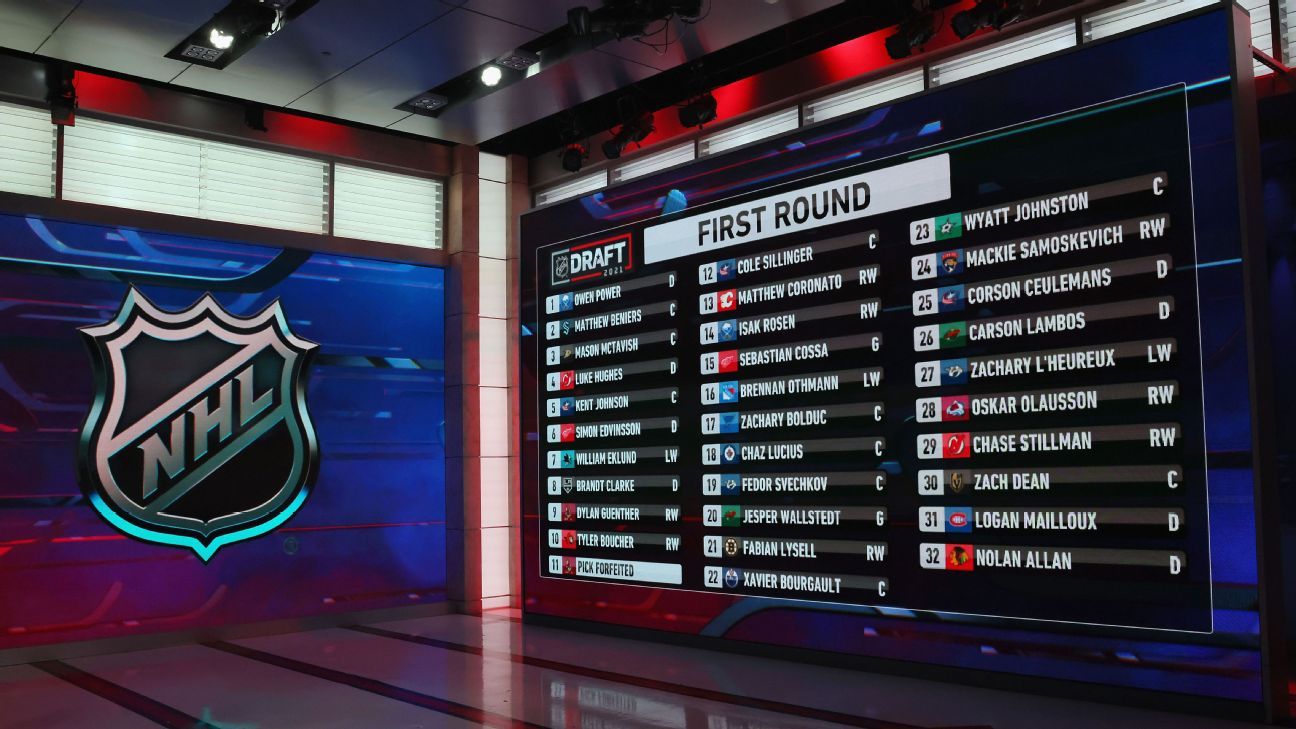 The first round of the 2021 NHL Draft was like a blockbuster summer movie.

There were tantalizing trailers, in the form of three blockbuster trades that preceded the draft and impacted picks — including Rasmus Ristolainen to the Philadelphia Flyers, Oliver Ekman-Larsson to the Vancouver Canucks, and Seth Jones to the Chicago Blackhawks.

There was the draft itself, which had its share of surprises, though something not all that shocking: The Michigan Wolverines saw an incredible five players (current and committed) selected in the first round, led by Owen Power at No. 1 and Matty Beniers at No. 2.

And then there was a twist ending — and an unfortunate one — that shocked the hockey world that tuned in to watch the NHL’s future stars get selected.

Which teams did the best on Day 1? Who made some head-scratching moves? Here are the winners, losers and lingering questions, along with a glance at the top 15 remaining prospects on the board for Day 2.

The newly-formed Seattle Kraken select Matthew Beniers out of Michigan with the No. 2 overall pick in the NHL draft.

It’s possible that this class will be known as “The Michigan draft” when it’s all said and done. Current Wolverines and committed recruits selected in the first round included first overall pick Owen Power (Buffalo) and No. 2 pick Matty Beniers (Seattle), marking the first time since 1969 that the same team produced the first two picks in the draft; as well as Luke Hughes (No. 4, New Jersey), Kent Johnson (No. 5, Columbus) and Mackie Samoskevich (No. 24, Florida).

Until Friday night, no NCAA team had ever had three current players taken in the first round; nor had three teammates been selected among the top five picks in the same year:As coach Mel Pearson told ESPN: “If we all get them back this year … holy cow.”

Along with Johnson at No. 5, the Jackets selected center Cole Sillinger (12th) and defenseman Corson Ceulemans (25th). That capped off a day that saw GM Jarmo Kekalainen trade star defenseman Seth Jones — who had one year left before unrestricted free agency and wasn’t coming back — to the Chicago Blackhawks for an impressive package that included the 12th overall pick, next season’s first-round pick and blue-chip young defenseman Adam Boqvist.

The Jackets also used the second-rounder they got from Chicago to acquire Carolina defenseman Jake Bean.

The New Jersey Devils select Luke Hughes, brother of former top draft pick Jack, with the No. 3 overall pick in the NHL draft.

The absolute jump for joy from New Jersey Devils star Jack Hughes said it all. His team drafted his brother, U.S. National Development Team defenseman Luke Hughes, with the No. 4 overall pick. With Jack having gone first overall in 2019 and Quinn having gone No. 7 in 2018 to Vancouver, the Hughes are the first American family with three siblings all selected in the first round of the NHL draft.

The hard-charging center had been climbing up the draft board in the weeks leading up to the first round, but few mock drafts had him going this high. The Peterborough (OHL) product was selected third overall by the Anaheim Ducks, who begin what might be the post-Ryan Getzlaf era with a player whose game has drawn comparisons to the Ducks’ star center.

The Coyotes started Friday with no first-round pick, as Arizona was forced to forfeit the No. 11 overall selection for violating NHL scouting combine rules. They ended the day having rid themselves of the last six seasons of Oliver Ekman-Larsson‘s contract and having drafted Dylan Guenther, an impressive goal-scoring winger from the WHL, thanks to a trade with the Vancouver Canucks.

Very touching tribute by the Minnesota Wild to have the children of Tom Kurvers, their former assistant general manager who died of cancer in June, involved in reading picks in the first round.

Boucher has that combination of offensive talent, physicality and agitation that’s catnip to people like Ottawa coach D.J. Smith and (most likely) new player personnel executive Pierre McGuire. But he was 40th in our draft prospect rankings and 25th among North American skaters by NHL Central Scouting. He may be a great draft choice, but it’s hard to justify that he’s a great draft choice at No. 10 overall.

Some projections had Sebastian Cossa of the WHL and Swedish goalie Jesper Wallstedt going as high as the top six picks in the first round. Instead, they dropped to the middle of the first round, past a few teams — Ottawa, Calgary, Buffalo — that could use a franchise goalie. But they ended up in good landing spots, as Cossa was drafted at No. 15 by Detroit and Wallstedt went to Minnesota at No. 20.

Was it a peculiar draft class? An aftereffect of the pandemic’s impact on scouting? Whatever the case, there was a gap of 15 picks from Brandt Clarke to the Los Angeles Kings at No. 8 to Corson Ceulemans to the Blue Jackets at No. 25 in which not a single defenseman was selected. The longest we went without one in the last three drafts was nine spots (in 2010).

The Devils’ selection of Chase Stillman at No. 29 was one of the most startling reaches of the first round. He was the 35th ranked skater in North America per NHL Central Scouting and didn’t crack our top 50 players. But the Devils needed someone who could develop into a power forward, and they drafted for need. GM Tom Fitzgerald said “our scouts were extremely passionate about Chase. He’s got very good skill. The motor just runs and runs and runs. You can’t teach that.”

The most shocking moment of the draft arrived at pick No. 31, when the Montreal Canadiens selected defenseman Logan Mailloux after the 18-year-old had asked NHL teams not to select him in the draft. Mailloux was fined for an offense of a sexual nature in Sweden last year, as he showed a photograph to his teammates that depicted him and a woman engaged in a consensual sexual act. The photo that was taken without consent of the woman, who went to local police.

Mailloux was asked about the incident in pre-draft interviews. After several published reports chronicled his indiscretion, some NHL teams said they wouldn’t have him on their draft board at all. Mailloux would eventually ask that his name be taken out of consideration for the draft, although that had no formal impact on his status.

“I know it will take time for society to build back the trust I have lost, and that is why I think it is best that I renounce myself from the 2021 NHL draft and ask that no one select me this upcoming weekend,” he said.

But a source told ESPN that multiple teams still intended on selecting Mailloux in the draft, with an eye on Saturday’s second round. The Canadiens jumped the line and selected him in the first round.

The team released a statement that said:

“The Canadiens are aware of the situation and by no means minimize the severity of Logan’s actions. Logan understands the impact of his actions. His recent public statement is a genuine acknowledgement of his poor behaviour and the first step on his personal journey. We are making a commitment to accompany Logan on his journey by providing him with the tools to mature and the necessary support to guide him in his development. We are also committed to raising awareness among our players about the repercussions of their actions on the lives of others.”

Sam Cosentino explains his concerns with the Montreal Canadiens drafting Logan Mailloux in the first round of the NHL draft.

When asked if he had any message to the Canadiens’ woman fans that might be concerned the team was so quick to draft a player who was fined for an offense of a sexual nature in Sweden, GM Marc Bergevin said, “We understand and we’re fully aware, and as an organization it’s very unacceptable. But also, it’s a young man who made a terrible mistake. He’s 17 years old. He’s willing and remorseful and he has a lot of work to do to put it behind him and have a hockey career.”

Clearly, some teams that still had him on their draft board valued talent and potential over the player’s wishes and any consideration for the victim. That Logan Mailloux is a first-round pick in a draft he wished not to participate in should be one more nail in the coffin containing the concept of “cancel culture.”

There were was a blur of trades before the draft, but two may be interconnected. Earlier on Friday, the Sabres sent defenseman Rasmus Ristolainen to the Philadelphia Flyers for the 13th overall pick and a second-rounder. At the same time, the Blue Jackets were in trade talks with the Chicago Blackhawks for defenseman Seth Jones — who is the same age as Ristolainen and had the same cap hit in the final year of his current contract, $5.4 million.

Whatever the price tag on Jones, what Adams got from the Flyers became the minimum payment for acquiring one year of his services. But the Blackhawks weren’t just trading for one season; they were trading for the chance to sign him to eight seasons beyond that. So Blue Jackets GM Jarmo Kekalainen was able to squeeze young standout defenseman Adam Boqvist and another first-round pick out of the Blackhawks as well.

While it appears that teammate Sam Reinhart was on his way out of Buffalo, the hockey world waits to see if Sabres star center Jack Eichel will finally be on the move. The New York Rangers and Minnesota Wild remain the most likely landing spots, although other teams like the Montreal Canadiens, Anaheim Ducks and Los Angeles Kings have also checked in.

Looking ahead to Day 2

Due to the flat $81.5 salary cap, and the potential for it not to grow much in the next few seasons, we’re seeing teams get very aggressive with young players who are restricted free agents with arbitration rights. That was the case with Carolina goalie Alex Nedeljkovic, who was traded to Detroit; forward Pavel Buchnevich, who was traded by the New York Rangers to the St. Louis Blues; and forward Conor Garland, whom the Coyotes sent to the Canucks in the Oliver Ekman-Larsson trade. Could we see more of them move in Day 2?

Aatu Raty. At one point considered a possibility for first overall pick, Raty had a measly six points in 35 games while playing in Liiga in Finland, and his stock plummeted. He’s a gamble, but a good one, given his incredible offensive talent. He just needs the right landing spot and a confidence boost. The Finn needs work, but the skill is there.