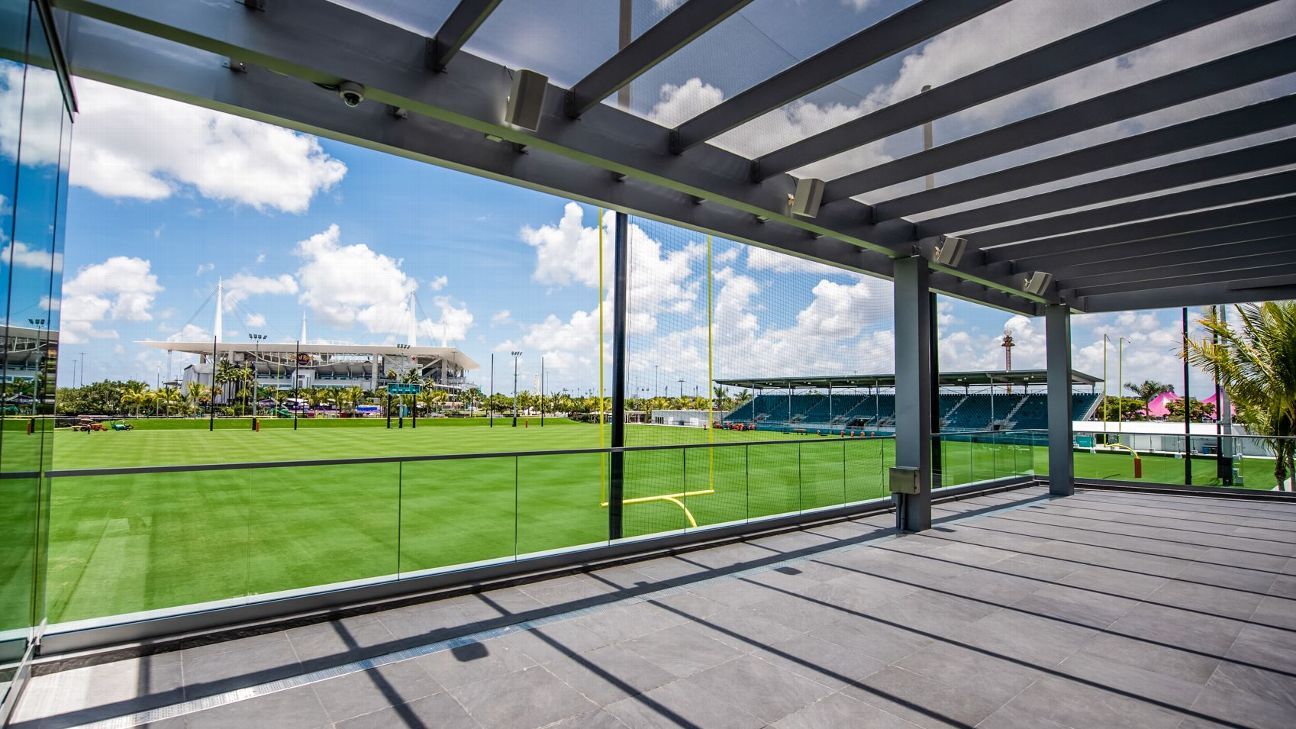 MIAMI GARDENS, Fla. — Miami Dolphins owner Stephen Ross stood at the lectern, exuding the confidence of a proud father bragging about his child who is the star quarterback. His newest baby, the Dolphins’ $135 million practice facility, was officially put on display Tuesday as corporate partners, employees and media members toured what will be the team’s new home.

It’s a big step up from Nova Southeastern in Davie, Florida where the Dolphins have held training camp and practices since 1993. The new Baptist Health Training Complex features an indoor facility with a turf field, two outdoor natural grass fields, a player’s lounge, four pools (two hydrotherapy, one lap and one hydroworks with an underwater treadmill) and a 30-foot slide among other highlights. Yes, there is a slide, but more on that later.

As Ross explained team president and CEO Tom Garfinkel’s vision in bringing the Dolphins’ facility to life, he couldn’t help but drop a few not-so-subtle messages that he expects this big purchase to be the latest splash toward bringing a championship home to Miami.

“I know when I bought the football team, one of the things I said was, ‘We want to do as much for the community as we possibly can, we want to be the best in class in the NFL and we want to win the Super Bowl,'” Ross said.

What you need to know about the Miami Dolphins:

“Well, we’re two-thirds of the way there, and I hope to be here when we’re hoisting the Super Bowl on a very short period of time, with an emphasis on short.”

With Dolphins general manager Chris Grier and coach Brian Flores seated about 10 yards away in the front row, the owner’s message came through clear. Coming off a 10-6 season in which they narrowly missed the playoffs, the Dolphins should no longer be viewed as a rebuilding team. It’s time to contend and this facility provides them the resources to do so.

“If you can’t win with a facility like this, you’re never going to win,” Ross said. “We’re starting something really big.”

Garfinkel and Ross have had this plan in mind for several years, but construction on the 217,200-square foot facility began in August 2019 and has been finishing up over the past few days. The steel field house indoor facility is two stories tall and includes a cardio deck on the top level. Given the propensity of downpours in South Florida, utilizing the indoor aspect is an important asset for the team. Not to mention, the landscaping around the facility includes roughly 16,000 flowers and shrubs, 210 palm trees and 128 total trees.

(From left to right starting with) Grier (in the hat), Flores, Ross and Garfinkel are the Dolphins’ central leaders. They all have different roles and the opening of the Baptist Health Facility Complex brings the football and business sides together even more than they were before. But ultimately, winning on the field is still most important. “We got a lot of input from Chris Grier and Brian Flores — now the pressure is on them. We delivered, guys. Don’t feel anything at all. I certainly believe in them,” Ross said.

Dolphins players report to training camp on Tuesday, and all eyes with be on quarterback Tua Tagovailoa headed into a very important Year 2. Miami will go as far as he takes it, and Tagovailoa will arrive to a fresh locker room, which rivals some of the lush ones we’ve seen in college football in recent years, such as LSU’s $20 million renovated facility. Tagovailoa’s locker is seated at the end of one row, right next to backup quarterback Jacoby Brissett‘s space.

Check out these views

The new facility has an awesome view with Hard Rock Stadium in the backdrop, and the outdoor fields seat up to 2,200 spectators in the shade. That will be come in handy for late July and August training camp practices in the Miami heat. Another 800 fans can fit on the berm at the far end zone. There are 13 training camp practices slated to open to the public with the first being July 31 — all start at 10:10 a.m. ET — and the Aug. 18-19 joint practices with the Atlanta Falcons are included.

The players’ lounge is another sleek addition inside the practice facility. It features plush couches, TVs, darts and a separate barbershop area where players can get their fades every Friday before game day. Dolphins legends Dick Anderson and Nat Moore toured the facility Tuesday, and jokingly (or, were they serious?) asked if former players can slide in to use some of these perks. This Dolphins’ facility is quite different than what Anderson and Moore experienced in the 1960s and 1980s when they played, respectively.

Garfinkel, Ross and others in the business department toured facilities across America some years back to get ideas to fulfill the goal of building the “best facility in the NFL.” Ross fell in love with a custom-built slide inside the Clemson Tigers‘ facility. So, what the owner wants, he gets. The Dolphins’ slide adds a fun outlet to what can be a tense environment. Ross has slid down it and a handful of players have as well. “Hopefully the players will be inspired to win,” Ross said. “It takes all these small details to put together a great organization that would be used to winning and winning often.” And here’s a pro tip for the slide: Don’t wear jeans for maximum speed.

Marino in the house

No major Dolphins happening would be complete without Pro Football Hall of Famer Dan Marino. He was one of 15 former Dolphins players in attendance for the facility’s grand opening, and in a light moment after the ribbon-cutting ceremony, Ross yelled out “he’s coming back” in reference to Marino, who jabbed back, “you can’t afford me.”

From the Dolphins: Take a video tour