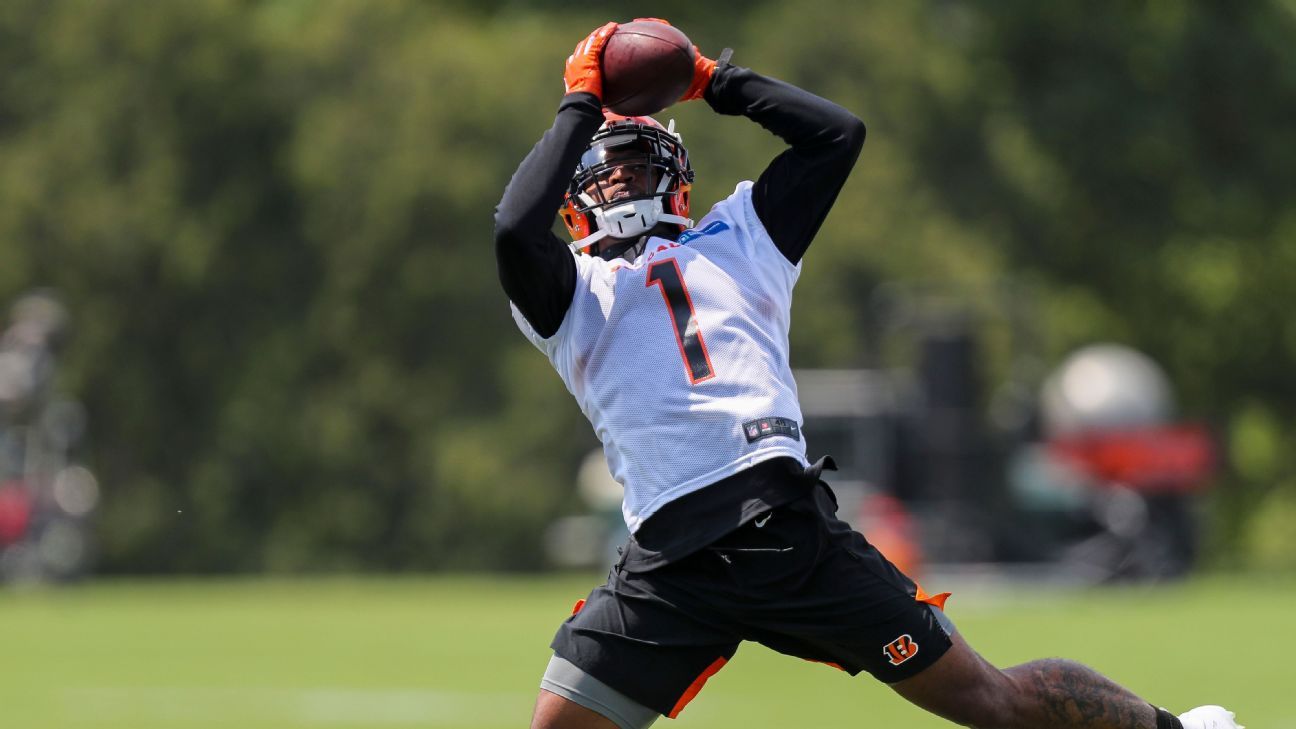 CINCINNATI — His Cincinnati Bengals teammates had already left the field following a summer workout, but rookie wide receiver Ja’Marr Chase was still on the turf at Paul Brown Stadium getting familiar with his job.

Chase plotted his place in the offensive formation as he worked on keeping his pre-snap routine and routes as uniform as possible to keep defenders guessing. Implicitly, he expressed the understanding every little detail matters when trying to create separation in the NFL.

That wasn’t an issue the last time Chase played football. He helped LSU win the national championship in 2019 and was crowned as the nation’s best wide receiver. That prolific season vaulted him to the fifth overall pick in the 2021 draft, reunited with his former quarterback, Joe Burrow.

Elite speed and strength turned Chase into a coveted NFL prospect. But an underrated aspect is his ability to think his way to success. That mental approach could be the key to Chase becoming the immediate playmaker for the Bengals.

“Everybody’s been surprised by how smart he was,” said Burrow, who played with Chase at LSU in 2018 and 2019. “I told everyone coming in, ‘He’s not going to bust, he’s going to know exactly what to do, he’s going to be a pro.’ And that’s exactly what’s happened.”

What you need to know about the Cincinnati Bengals:

Bengals assistant wide receivers coach Brad Kragthorpe was an analyst during the duo’s first season together at LSU. Kragthorpe, a former LSU reserve quarterback, saw a glimpse of Chase that reminded him of some of his former college teammates such as Jarvis Landry and Odell Beckham Jr.

Kragthorpe recalled one rep in which Chase ran after a deep ball down the left sideline. It was a high throw aimed at his back shoulder, the type of catch that required elite coordination and body control. The freshman caught the pass and the attention of the other receivers.

“He flashed ball skills that freshmen in college shouldn’t be able to make those types of plays,” Kragthorpe said. “They shouldn’t have that type of body control in the air. That stuff comes along as you develop your athletic skill set.”

It was that combination of speed and strength that allowed Chase to overpower defenses, fluster coordinators and even change the offensive scheme in high school at Archbishop Rummel in Metairie, La. Even though Chase was considered a consensus 4-star recruit, some people were skeptical of him as one of the best wide receivers in the country.

Chase did that in high school as he led Rummel to the brink of a state title before a knee injury ended his season during a playoff run his senior year.

When he arrived at LSU and his game evolved and the opponents got tougher, Chase realized more was required to succeed.

One film session before the pivotal 2019 season was evident of that approach. According to Chase, he and Burrow sat down for a film session to analyze a particular defensive back.

Burrow started to point out the defender’s negative attributes and how he was getting beat.

“Once he showed me stuff like that, I started asking him questions about what I should look for when I’m watching film and he told me those things,” Chase said.

Chase and Burrow hit their stride in 2019. After lackluster numbers as a true freshman (23 catches, 313 yards, three touchdowns), Chase blossomed into one of the nation’s most productive receivers, operating in college football’s most explosive offense. Chase finished the 2019 season with a staggering stat line — 84 catches for 1,780 yards and 20 touchdowns.

Chase opted out of the 2020 season amid the COVID-19 pandemic, so his sophomore season was the final game tape the Bengals and other NFL teams used to evaluate him. And even as his 6-foot-1, 200-pound frame continued to give defenders problems, those physical traits were accentuated because of Chase’s mental prep work.

“He understands the ins and outs of playing receiver,” Bengals coach Zac Taylor said. “He’s got great route understanding and great scheme recognition. They’re not 50/50 balls when he’s in there. He does such a phenomenal job of positioning his body and going up and making plays and finishing plays off.”

Chase’s physical skills were easy to identify. But the question is the same one posed to every high-profile rookie tasked with making an immediate impact: How quickly can they learn the system and adapt to the game’s highest level?

To Bengals assistant Troy Walters, that was the most impressive aspect of Chase’s offseason in Cincinnati.

“He has picked it up fast — easily,” Walters said. “When he’s out there, you don’t even think that he’s a rookie. You kind of take it for granted that he’s going to know what to do.”

One rep during offseason workouts illustrated that perfectly. In walkthroughs, Chase was facing coverage that required him to change his route. Initially, the play called for Chase to run a post. But with the defender in press coverage, he changed it to a go route.

That mentality is a natural approach from how he has developed from his high school days to LSU and now to Cincinnati. His father used to needle Chase about little things he missed on various plays at LSU or how he needed to prepare for tough matchups.

Chase reassured his father with a simple phrase: “Just watch the show.”

Jimmy’s role has been relegated to being a spectator.

In addition to his attention to detail, Chase’s humility was referenced by multiple current and former coaches. When Chase met with Walters for the first time, he said he wanted to run a 4.5-second, 40-yard dash at LSU’s pro day, a slow time for wide receivers. Chase ran a blistering 4.38.

Right before the draft, one of his former Rummel coaches asked him to come back for an alumni event. Chase signed everything in sight for a full hour — hats, pictures, high school programs and LSU memorabilia.

“Then they made an announcement that he would not sign anymore,” said Jay Roth, Rummel’s former head coach. “And when it was over, when they came up to him, he did whatever people asked him to do.”

When the Bengals open the season on Sept. 12 against the Minnesota Vikings, Chase will have the opportunity to show why the Bengals drafted him to be an immediate playmaker. He has prepared for this dating back to the moment he opted out of the 2020 LSU season.

And in joining a team with a legacy of great wide receivers, his expectations for himself are as high as they are externally.

“I’m going to break every record they have,” Chase said on draft night. “That’s my goal, and I’m telling you right now. I don’t know how I’m going to do it, but it’s going to get done.”

Bowl games to start the season? Reimagining the college football calendar
Auburn QB Finley charged with eluding police
Nets’ Tsai backs staff amid Durant trade demands
The greatest NFL defenders ever: We picked the GOAT at each position, from LT to Prime Time
With deGrom back and Diaz rolling, these Mets are for real — really!