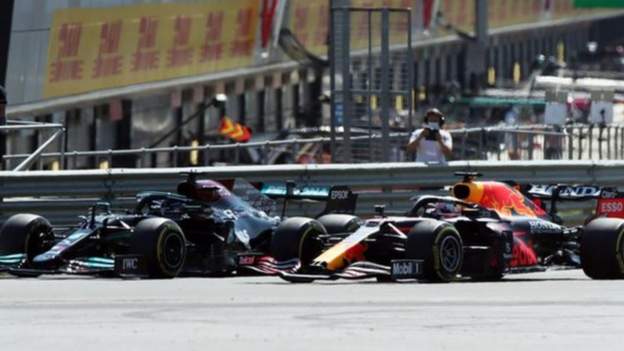 The figure is more than one percent of the team’s total budget this season, following the introduction of Formula 1’s budget cap at $145m this year.

Horner said the loss “has massive ramifications” for this season.

The cost could impact on Red Bull’s ability to bring performance upgrades to their car, among other expenses.

The figure is a best early estimate for repairs the car, and could yet go up – Red Bull are still looking into whether the monocoque can be repaired or will have to be replaced with a new one.

Engine partner Honda has also not yet revealed whether the power-unit can be saved. If it cannot be, Verstappen will need a new one and will almost certainly exceed the permitted number of engine parts for the season, in which case he will receive a grid penalty at a race later in the season.

Horner’s revelation came in a column published by Red Bull dealing with the incident and its aftermath.

Hamilton won the British Grand Prix despite being given a 10-second penalty for being judged by race stewards to be “predominantly to blame” for the incident.

Combined with Verstappen’s retirement, this meant the Mercedes driver cut Verstappen’s championship lead from 32 points before the race to eight.

Horner said the team “felt at the time, and still feel now, that Hamilton was given a light penalty for this type of incident”.

He added that Red Bull were still considering whether to try to take the matter further in an attempt to increase Hamilton’s penalty.

“Given the severity of the incident and the lenient penalty, we are reviewing all data and have the right to request a review,” Horner said. “We are therefore still looking at the evidence and considering all of our sporting options.”

Horner said Verstappen and the team were determined to try to recover the damage to their championship bid at the next race in Hungary on 1 August.

“We will all be fully motivated to retain our championship lead,” Horner said.

“Max won’t dwell on anything from Silverstone and wants to do his talking on track. He is determined to put this incident behind him and use it as added motivation for the rest of the season, as are we.”

He added: “I would like to respond to some comments I have seen from Toto [Wolff, the Mercedes F1 boss], who is quoted as saying our comments regarding Hamilton having caused the accident were ‘so personal’.

“I would like to make it clear – this was an on-track incident between two of the best drivers in the world.

“At the point in time when you have a driver in hospital and the extent of any injuries have not yet been made clear, your car has been written off and the stewards have penalised the driver seen to be responsible, it is natural that emotion comes into play, for all involved, whether you feel wronged or victorious.

“I also felt the narrative that Max was being ‘overly aggressive’ at that stage was unjustified.

“You only have to look at the fact Max has zero penalty points on his licence and has not been found guilty of any on-track misjudgements in recent years.

“Both drivers are of course uncompromising in their driving style, but they are both highly skilled with a great deal of experience.

“The reality is that Hamilton has met his match in a car that is now competitive, and I agree that both drivers need to show each other respect, but Hamilton was the aggressor on Sunday.”