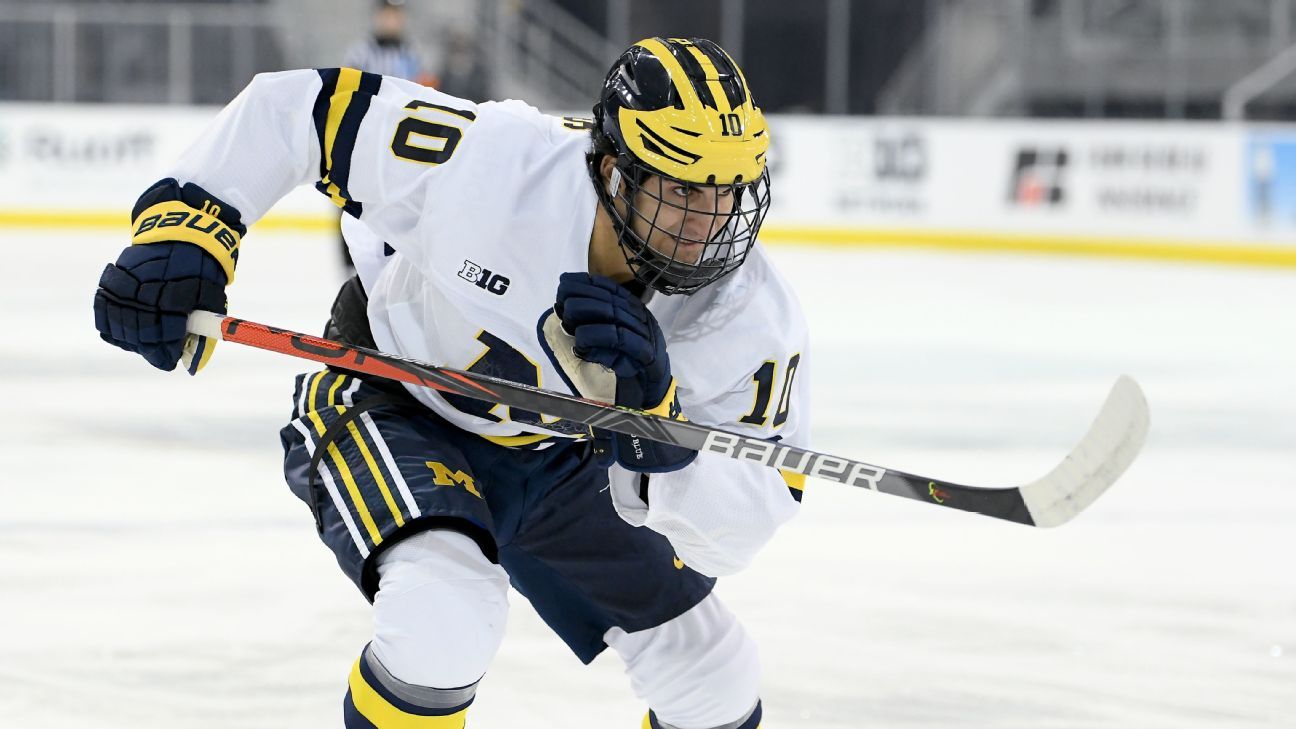 You’ve read through our top-50 prospect rankings, checked out the latest projections in Greg’s mock draft, learned more about what makes Owen Power such a great prospect from Emily’s story, and of course, digested the Seattle Kraken‘s expansion draft process thanks to our top takeaways file.

Now, it’s time to answer those final lingering questions you might have about Round 1 of the 2021 NHL draft, prior to the broadcast at 8 p.m. ET tonight on ESPN2.

Who are the top prospects? Could Luke Hughes join one of his brothers? How many goalies will be taken? Will the trades for Jack Eichel or Seth Jones be completed this weekend?

Who is the top prospect, and what makes him special? What percentage chance would you say he goes at No. 1 to Buffalo?

Kaplan: Owen Power is the odds-on favorite to go No. 1 overall. I’d put it at 95%. Evaluators have billed the 2021 draft class as a tough one to judge — the pandemic forced entire junior leagues to shut down and limited in-person exposure — so teams may lean toward safer picks. Power, a 6-foot-6 and 214 pound defenseman, is as steady as they come. A scout I talked to used descriptors like “solid,” “sees the game well,” and “rarely makes a mistake.”

Power played for the USHL’s Chicago Steel, then played last season at the University of Michigan. The scout said his status as the No. 1 pick was cemented at the 2021 IIHF world championship. Power, playing for the senior Canada team, earned trust from coach Gerard Gallant throughout the tournament. Power played at least 24 minutes in all three elimination-round games, as Canada overcame a 0-3 start to win gold.

Who are some of the other top prospects, and who makes the most sense for Seattle’s first ever draft pick at No. 2 overall?

Wyshynski: The consensus No. 2 is Matty Beniers, a center and Power’s Michigan teammate. He’s a shifty skater and an offensively talented pivot whose game starts in the defensive end. Not the franchise center we’ve seen drafted in this spot in previous years, but a top-line guy for certain.

But that consensus is a narrow majority. Simon Edvinsson, a 6-foot-5 Swedish defenseman with raw but tremendous skills, is a temptation for a Kraken team that’s already emphasized the blue line in the expansion draft. Swedish forward William Eklund, with a high-end offensive skill set, ranges anywhere from second down to 10th on some mock drafts. Center Mason McTavish has drawn comparisons to Ryan O’Reilly for his two-way play and aggressive game. Then there’s goal-scoring winger Dylan Guenther, who is notable for both the quality of his shot and his ability to find open spaces to use it.

But the best guess remains Beniers, who shares some on-ice qualities with the guy that’s drafting him, Hall of Fame center and Seattle GM Ron Francis.

Could Luke Hughes join one of his brothers with either New Jersey or Vancouver?

Kaplan: In May, I began asking around about Luke Hughes and heard the same thing consistently: If he’s available, the Devils or the Canucks will have a hard time not taking him. The Devils pick first of the two clubs, at No. 4, and that’s not a reach. Hughes, a defenseman like Quinn, is the tallest of the brothers at 6-foot-2. Like Jack and Quinn, he’s an excellent skater — maybe the best in this year’s draft.

After talking to Luke, I was impressed by how self-assured he was, too, a classic youngest sibling trait. If the Devils don’t pick him, the Canucks select him at No. 9.

What should the Blue Jackets do with their three first-round picks?

Wyshynski: GM Jarmo Kekalainen indicated on Thursday that the team will keep its pick at No. 5 overall, and also indicated that positional needs could end up being the tie-breaker for his team. Well, the Blue Jackets have more than a few positional needs.

If Edvinsson is there, he’s a nice addition for a team saying goodbye to franchise defenseman Seth Jones this offseason. If it’s a center, one assumes McTavish or Eklund, the latter of whom plays center and wing. If it’s wing and Guenther falls to five, it could be him.

As for picks Nos. 25 and 32 — stay the course. No need to package them to move up in a draft that has its uncertainties due to a lack of scouting in the last year. Kekalainen made his reputation with wise picks in the draft, and he should use both selections here.

Which team will be the most interesting to watch during the draft?

Kaplan: The Minnesota Wild have two first-round picks (No. 22, and No. 26, which originally belonged to the Pittsburgh Penguins), so they should be busy regardless. However, GM Bill Guerin‘s bold offseason moves so far — buying out the remainder of Zach Parise and Ryan Suter‘s contracts — foreshadow something bigger down the road. The buyouts were about clearing salary as much as they were about changing the roster construction and turning over the locker room to the younger players.

The one thing the Wild need most is a top-level center; the one player they’ve been linked to for weeks is Buffalo captain Jack Eichel. Is draft day the day it can get done?

Which team lacking a first-rounder will miss it the most?

Wyshynski: The obvious answer are the Arizona Coyotes, who had their first-round pick stripped from them by the NHL for violating its combine testing policy. That incident happened under former general manager John Chayka’s watch, but current GM Bill Armstrong — known for his drafting prowess in St. Louis — suffers the consequences as they lose the No. 11 overall pick.

But the real answer might be the Penguins, a team that’s very “win now” and could really use that pick to bolster its roster. Alas, former GM Jim Rutherford sent it to the Wild in a trade for winger Jason Zucker, whom current GM Ron Hextall just left exposed in the expansion draft.

How many goalies will go on Day 1?

Kaplan: Two. We’re coming off back-to-back years of exceptional first-round goalies — Spencer Knight, No. 13 to Florida in 2019 and Yaroslav Askarov, No. 11 to Nashville in 2020 — and this year will bring us two more. Jesper Wallstedt from Sweden and Sebastian Cossa from Canada both could land in the Top 20.

I know of at least one team in the Top 10 that is thinking about selecting Wallstedt. I also have heard there are some teams that have Cossa over Wallstedt. Moral of those stories? They’re both really good.

Who is an NHL player to watch on the trade block for Friday night?

Wyshynski: We all have visions of blockbuster trades every NHL draft, and this season is no different with Eichel, Vladimir Tarasenko, Evgeny Kuznetsov and Seth Jones among the star players very much on the block. But there are complications off the ice — health, behavioral, contractual — that could mean they’re completed later in the offseason, perhaps with the groundwork laid during the draft.

So we’ll go with a smaller name: Nate Schmidt of the Vancouver Canucks. It didn’t work out for him there last season, and they’re actively trying to move him. He makes $5.95 million against the cap through 2024-25 and has some trade protection, which is problematic for GM Jim Benning. But he’s great in the dressing room and can still find that form he had with the Vegas Golden Knights. We imagine something gets done, perhaps by this weekend.

Where would you set the over/under on trades for Round 1? Is there a team that might be looking to move up the board?

Kaplan: I’d set the over under at 3.5, and would take the under. Evaluators say there’s a drop off in talent around the No. 15 range. Because of the lack of consistent scouting this season, there’s also a variety of opinions on prospects from the second half of the first round onward.

As for the team looking to move up? The Coyotes forfeited their first-round pick due to combine testing violations, but they have two early second-round picks (No. 37 and 43) which could be used as leverage.

Give us one bold prediction for Round 1.

Wyshynski: I predicted this in my mock draft — and it would be “seeing Halley’s Comet while riding on the back of a unicorn” rare for the NHL draft — but there’s at least a chance that goalies Jesper Wallstedt and Sebastian Cossa not only both get drafted in the first round, the first time that will have happened since 2012, but could go back-to-back in the first round, thanks to a cluster of teams with organizational goalie needs picking from Nos. 6 to 13.