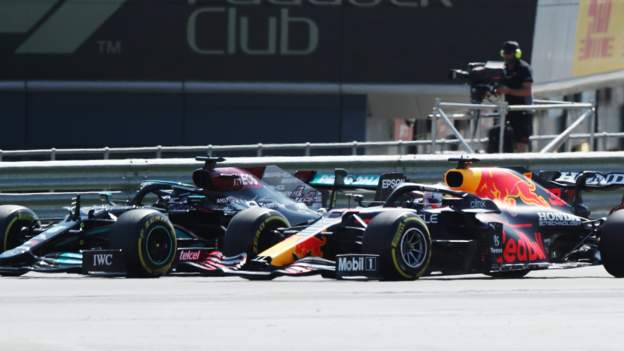 Formula 1 teams have been warned they could face penalties if they visit race stewards without an invitation.

Race director Michael Masi has written to all teams warning them that visiting the stewards was only permitted with prior approval or an official summons.

He warned that transgressions could be considered a breach of F1’s rules.

Penalties for breaking of the article Masi mentioned – 12.2.1.i of the international sporting code – could range from a reprimand, through a fine, points deduction or even disqualification.

Mercedes F1 boss Toto Wolff and Red Bull’s Christian Horner went to see the stewards during a red-flag period after the crash at the British Grand Prix.

Wolff had been concerned about the contents of a discussion between Horner and Masi about the crash, in which the Red Bull boss squarely blamed Hamilton.

Wolff asked Masi if he had seen some emails he had sent to him containing diagrams in the stewards’ overtaking guidelines that dealt with when a driver has the right to commit to a passing move.

Masi said: “I suggest if you want to, Toto, feel free to go upstairs and see the stewards directly.”

Horner also then went to see the stewards.

He said afterwards: “I don’t think the stewards should be interfered with. I went to see the stewards because I heard Toto was up there presenting a case and you want it to be fair and balanced.

“I don’t think it’s right that team principals should be able to go and lobby the stewards. They should be locked away so that they’re not influenced. For me, that was unacceptable that he had gone up there.”

Hamilton was adjudged to be “predominantly to blame” for the crash on the first lap of the British Grand Prix and was given a 10-second penalty.

He recovered to win the race and cut Verstappen’s championship lead to eight points from 32.

Verstappen was taken to hospital after an impact measured at 51G but was released later that evening unharmed.

After the race, Masi said he did not have a problem with teams going to see the stewards.

“If we have an incident after the race, we invite the teams and the drivers to come up and appear before the stewards,” he said.

“We had the case in Monza last year when Lewis went and spoke to the stewards to understand what happened and have a look at the whole picture. During the suspension, that ability exists, so there’s no reason not to.”