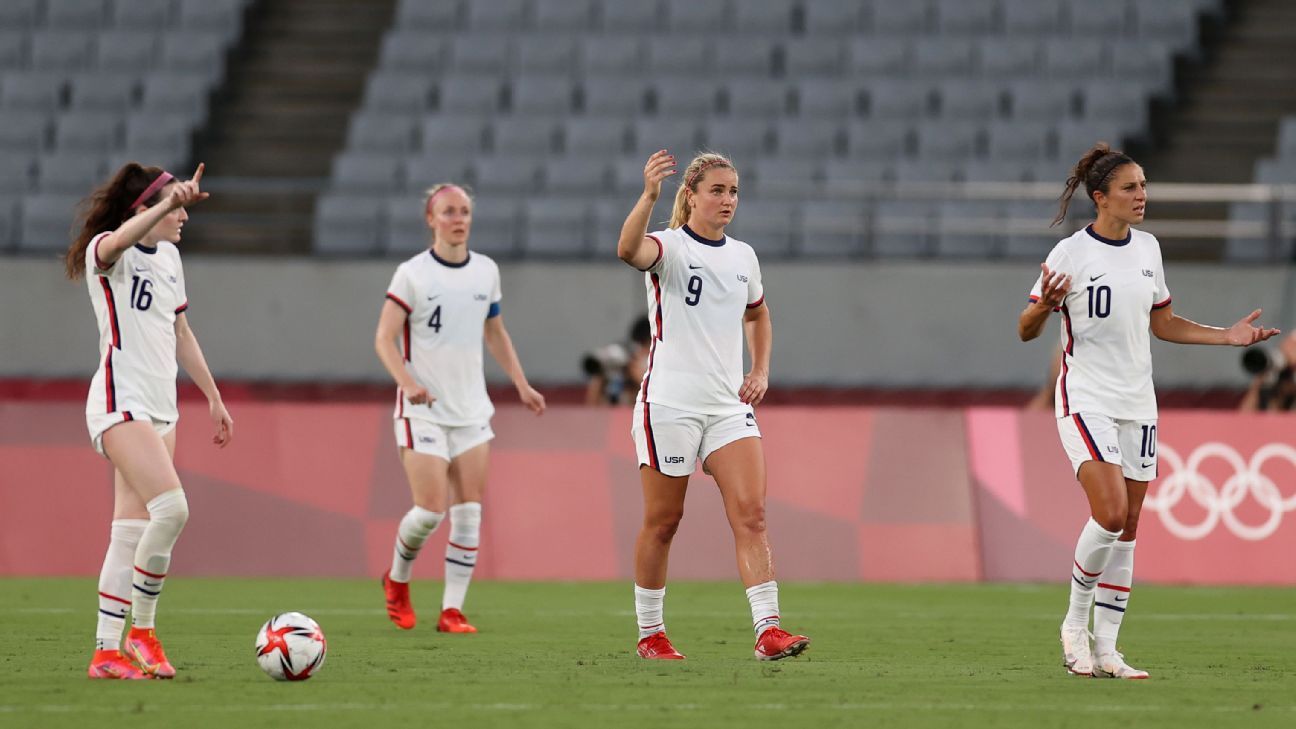 There was a moment early in the first half of the United States women’s national team‘s opening match of their Olympics campaign when midfielder Rose Lavelle, dribbling into Sweden‘s half with the ball at her feet, looked around furiously and put her hands out, as if she was lost. Even without being able to hear what she said in Tokyo’s cavernous Ajinomoto Stadium, it’s easy to imagine it was something along the lines of, “Where is everyone?”

That, in a nutshell, was how the USWNT began their 2020 Olympics, looking confused in a 3-0 loss to open Group G.

The defeat was notable, first, because the team rarely loses. They came into Wednesday’s match unbeaten in their previous 44, with 40 of them wins. Their last loss was in January 2019, at a friendly match in France.

To say the reigning Women’s World Cup champions arrived in Japan as a favorite is perhaps an understatement. The U.S. has reached the gold medal match in five of the six Olympics Games since women’s soccer became an event, and unlike some of the teams in this Olympics, the USWNT has played warm-up games for the months leading up to this amid the pandemic.

But the defeat was also notable because of just how bad the loss itself was. Confused expressions abound as players, including Lavelle, looked for an open American to pass the ball to but couldn’t find anyone. As Sweden swarmed, pressing and bossing the midfield, the Americans looked rattled and gave the ball away too cheaply.

“It felt like there were holes everywhere defensively,” striker Alex Morgan said. “I didn’t feel like we were pressing together, and then when we were on the attack and we’d lose the ball, we didn’t have the numbers around the ball to win it back.”

The hopelessness and confusion wasn’t in spurts, as is wont to happen for even the best teams sometimes — rather, it endured for the full 90 minutes and the USWNT never looked close to waging a comeback. That is a rare feeling in USWNT history. The last example may have been at the 2007 World Cup, where Brazil pummelled the U.S. 4-0 — but there were the extenuating circumstances of then-coach Greg Ryan bizarrely benching first-choice goalkeeper Hope Solo for nothing more than a hunch.

There was no reason for the USWNT to lose as badly as they did Wednesday, but plenty of credit belongs to Sweden, a team that over the years has become the tactical thorn in the USWNT’s side. After all, the only Olympics the USWNT crashed out of was in 2016 when Sweden, playing a disciplined, ultra-defensive bunker, knocked the Americans out in the quarterfinals.

This Sweden was not a bunker-and-counter team, however. This Sweden in Japan was out for the jugular, delivering crunching tackles to stop any whiff of American possession, and committing numbers forward to slice through the American defense and strike.

Sweden’s first goal in the 25th minute was seemingly just how they planned it: the USWNT got stuck in the midfield with nowhere to go and lost possession, springing Sweden in the other direction. Yellow shirts flew forward and, before the U.S. even seemed to know what had happened, Stina Blackstenius headed the ball into the back of the net.

When the USWNT dominates games, they like to use every inch of the field, spraying the ball around the field and using the wide spaces to their advantage, and Sweden certainly recognized that, closing passing lines and choking those spaces. That rendered the U.S. midfield a turnover machine. But as much as Sweden deserves credit, the Americans also deserve blame.

“We got our ass kicked a bit,” Megan Rapinoe said afterward. “There’s a lot of stuff we can clean up — trap the ball, pass the ball to your own team is probably the first one.”

In other words, the USWNT looked flummoxed and unprepared for what they faced Wednesday. It would be easy to say that perhaps the USWNT was just overconfident. Maybe the No. 1-ranked team in the world and the favorites of this tournament, had expected a cakewalk. On the contrary, the USWNT seemed to lack confidence from the opening whistle. That put the U.S. in trouble immediately because their confidence is perhaps their deadliest weapon – the mentality that no matter the score, they always believe they can win and find a way to out-work the other team.

“We were a little tight, a little nervous — doing dumb stuff like not passing the ball,” Rapinoe said. “…I think a lot of it was just us not playing free and not being who are and not enjoying it.”

If there is a positive spin to put on the performance, it’s that at least it happened in the tournament’s opening and not later on. After 44 games unbeaten, the USWNT might have needed a reminder of the pain of losing.

“We’ve had a long string of wins and we haven’t had a lot of games where we’ve had to come back or anything like that,” forward Christen Press said. “I think it was actually really good to have this match.”

Take, for instance, the 2008 Olympics. There, the U.S. lost 2-0 in their opening match to Norway. They bounced back without losing the rest of the way and won gold. While the U.S. doesn’t usually lose in major tournament, they do usually have bad performances. During the 2015 World Cup, which the U.S. later won, calls to fire then-head coach Jill Ellis over the lackluster performances came from the media and even former members of the team.

At the 2019 World Cup in France – where on paper the U.S. dominated, scoring within the first 12 minutes of every match en route to the final — the round-of-16 match against Spain was shaky, and mistakes allowed Spain to score, making for a surprisingly close match given Spain’s still-rising status in women’s soccer.

But the proper lessons will need to be learned, which includes from coach Vlatko Andonovski, whose substitutions projected panic and nervousness than the composure that comes from a clear game plan. At halftime, he yanked striker Alex Morgan, who was the least of the U.S.’s problems as the most advanced player on the field, in favor of Carli Lloyd, who has usually been reserved for late game minutes. He also took off Samantha Mewis for Julie Ertz, the stuck-in defensive midfielder he surely would’ve preferred started Wednesday. After all, Ertz is known as a midfield enforcer who flies in challenges and wins balls — but crucially, Ertz is coming off an injury and she hasn’t played competitive soccer since May, and some rust was evident, making her an unlikely solution in a game as difficult as the one against Sweden.

The good news, at least, is that New Zealand, the USWNT’s next opponent on Group G is, with all due respect, not at Sweden’s level. It’s also hard to imagine the USWNT can play any worse, so their Olympic campaign can only improve from here.

“We, like Vlatko said, got ourselves into this mess,” captain Becky Sauerbrunn said. “Now it’s our responsibility to get ourselves out of it.”