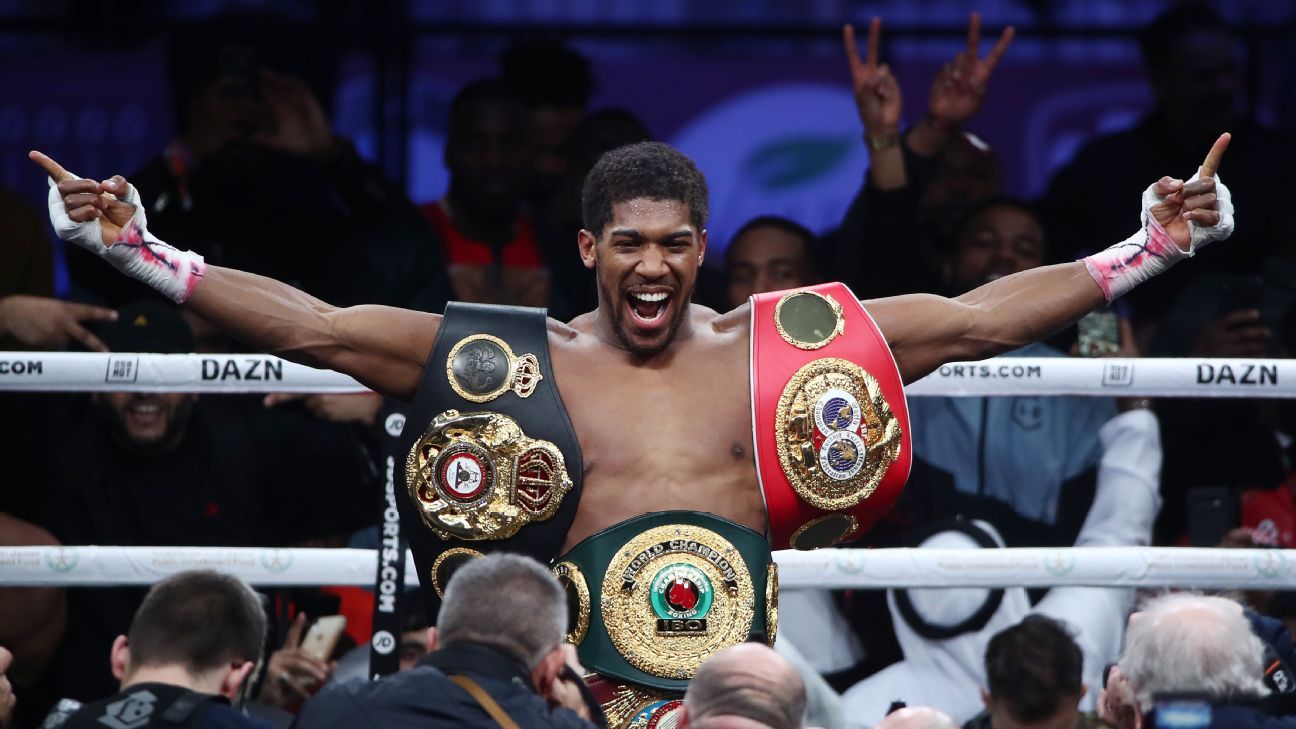 Anthony Joshua will defend his WBA, IBF and WBO world heavyweight titles against Oleksandr Usyk in front of what is hoped will be a crowd of over 60,000 fans at Tottenham Hotspur Stadium, London, on Sept. 25.

Joshua’s team at Matchroom had been negotiating with Usyk — who is the mandatory challenger for the English boxer’s WBO belt — after talks between promoters to stage a unified title battle between Joshua and world heavyweight champion Tyson Fury broke down in May.

Joshua (24-1, 22 KOs), 31, and Usyk (18-0, 13 KOs), 34, won gold medals at the 2012 Olympics at super-heavyweight and heavyweight respectively and the fight will mark the first time two gold medallists in respective categories will face off in the professional ranks.

Following London 2012, Ukraine’s Usyk unifed all four world title belts at cruiserweight before stepping up to heavyweight in 2019, where he has had two bouts.

Matchroom promoter Eddie Hearn said: “Olympic gold vs. Olympic gold, unified world heavyweight champion vs. undisputed cruiserweight world champion this one has it all and I can’t wait to stage this huge event in front of over 60,000 at the stunning Tottenham Hotspur Stadium.”

With Fury now fighting Deontay Wilder for the WBC title next, Usyk is the best opponent Joshua could have fought in front of what will be the biggest crowd at a boxing event in the United Kingdom since Josh Taylor beat Regis Prograis at the O2 in London in Oct. 2019 due to the coronavirus pandemic and the subsequent restrictions.

Joshua said: “We are two Olympic hold medallists who have fought our way to the top and never avoided challenges. The stadium is exceptional, the atmosphere will be electric, I’m honoured to be the first person to fight in such an awe inspiring venue. The stage is set and I am ready to handle business.”

Joshua is in his second reign as world champion, after winning back the belts with a points total over American Andy Ruiz in December 2019, which avenged a shock stoppage defeat to the American earlier that year.

The north Londoner, who made six defences in his first reign, returned to knockout form in December, with a ninth-round win over Bulgaria’s Kubrat Pulev.

Usyk unanimously outpointed England’s Dereck Chisora in October and if Joshua wanted to keep the WBO belt, he had to face Usyk next.

Usyk said: “The path will be mastered by the walking one.”

Joshua was granted an exemption to his mandatory obligations to try and make a fight with English rival Fury, the WBC champion, for all four world title belts.

Joshua and Fury declared they had agreed to fight each other in June last year, but although promoters claimed the fight — which was reportedly worth £200 million — was almost done, the agreement fell apart when an arbitration hearing in the United States ruled that Wilder was owed a third fight with Fury.

Fury will face Wilder in Las Vegas on Oct. 9 (Watch on ESPN+ in the U.S.), after the trilogy fight was postponed from July 24.

The English Premier League stadium also hosted the heavyweight fight between Frank Bruno against Joe Bugner, also promoted by Matchroom, in 1987 as well as Chris Eubank versus Michael Watson for the WBO world super-middleweight title in 1991.

Daniel Levy, Tottenham Hotspur chairman, said: “This is a huge occasion for Tottenham Hotspur Stadium — Anthony Joshua is an icon in the world of sport and to have him fight here in London N17, against a top opponent in Oleksandr Usyk, will be amazing for the area of Tottenham. This event will once again showcase the stadium’s ability to take the hosting of world-class sporting occasions to the next level — we cannot wait for Sept. 25.”