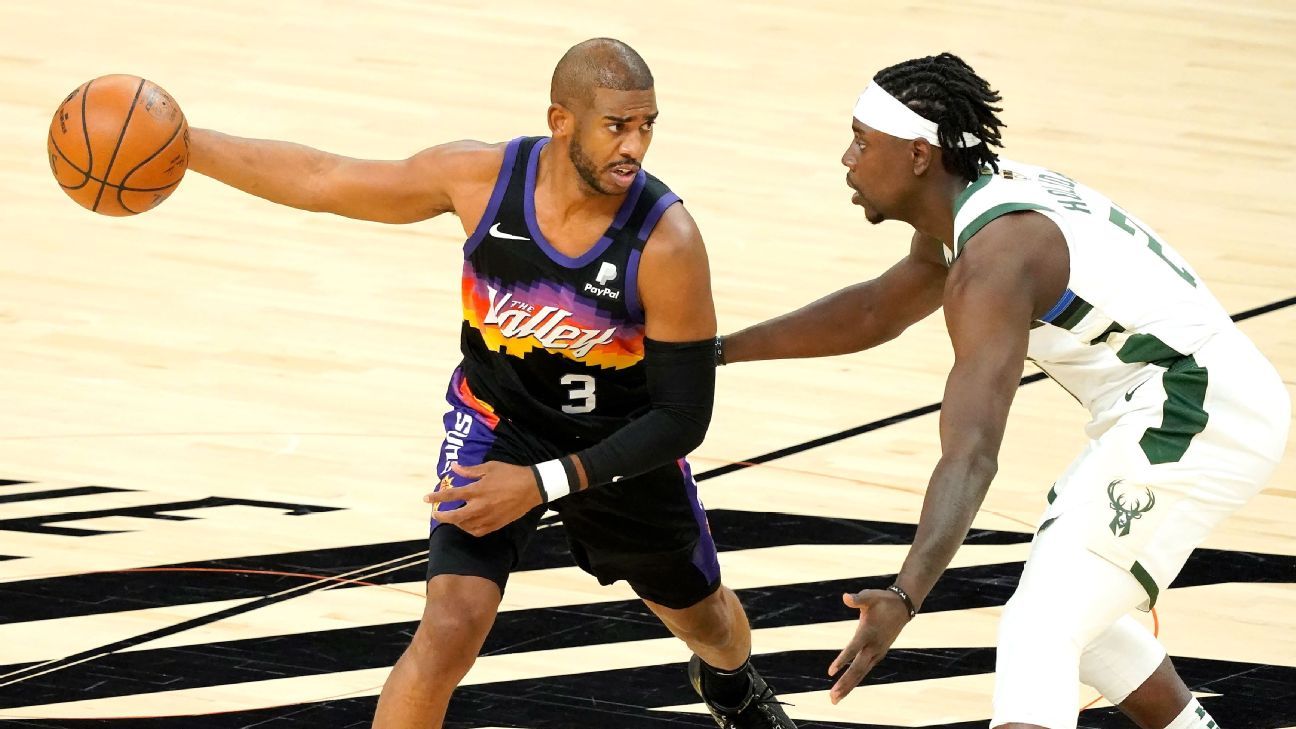 PHOENIX — If there ever was a time for Monty Williams to come up with one of the adages he has been heralded for, it was after his Phoenix Suns‘ 123-119 loss to the Milwaukee Bucks in Game 5 of the NBA Finals on Saturday.

The defeat was Phoenix’s third in a row on the Finals stage after the coach’s group had dropped three in a row just once all season, back in January. And it came in excruciating fashion: The Suns squandered an early 16-point cushion and fell down 14 in the fourth, only to have their chance to take the lead back in the final minute go awry.

So Williams kept his message matter-of-fact, looking ahead to Tuesday’s Game 6 in Milwaukee, with the Bucks up 3-2 in the series.

Devin Booker followed up 42 points in Game 4 with 40 points in Game 5, becoming the first player in Finals history to lose back-to-back games in which he went for 40-plus points. He needed one more play to go his way.

Booker grabbed the rebound off a Jrue Holiday miss with 29.2 seconds remaining in the fourth and pushed it up the floor, with the Suns trailing just 120-119 after a 12-3 run in the previous three minutes.

Booker advanced all the way to the heart of the paint before picking up his dribble. After his pump fake to get P.J. Tucker off his feet didn’t provide Booker enough space to get off a close-range shot because Giannis Antetokounmpo hustled over to help on defense, the Suns shooting guard tried to recalibrate.

But right as Booker tried to pivot to create some room and swung his left shoulder, Holiday was waiting on his hip, out of Booker’s peripheral vision, and lunged at the ball, stripping it away from Phoenix’s young star.

“I was just trying to score the ball. He was behind me,” Booker said afterward. “I turned and he was right there.”

The Suns had been 7-of-10 from the field with zero turnovers on possessions when Booker drove to the basket in Game 5 prior to the Holiday steal, according to research by ESPN Stats & Information.

Holiday timed his swipe perfectly and started the Bucks on a break, threading a ready-made alley-oop pass to Antetokounmpo that he dunked home, while absorbing a foul from Chris Paul, who pushed Antetokounmpo in midair.

“A great play by Jrue,” Williams said. “I don’t have any other words for that one.”

The game wasn’t quite over yet, as the slam put Milwaukee ahead 122-119 with 13.5 seconds remaining and an ensuing Antetokounmpo and-1 free throw to come.

The two-time MVP missed, as he did with seven of his 11 free throw attempts on Saturday, but Antetokounmpo tapped his own board back to Khris Middleton, who was fouled and tacked on another free throw to put the game out of reach for Phoenix.

“That was a horrible miss,” said Suns center Deandre Ayton, who was lined up to try to secure the rebound and couldn’t get a hand on it. “It was just an athletic play, you know; he tipped it behind him knowing that his teammates are there. It was a bad miss.”

The question is whether the series has turned to the point where the Suns will be remembering the 2021 Finals as a missed opportunity for years to come.

“We knew this wasn’t going to be easy,” said Paul, who bounced back with 21 points on 9-for-15 shooting, 11 assists and just one turnover in Game 5. “We didn’t expect it to be. It’s hard. Coach said it all year long: Everything we want is on the other side of hard, and it don’t get no harder than this.

Trailing for the first time all series — and for just the second time all postseason, after the Los Angeles Lakers had the Suns down 2-1 in the first round before Phoenix then won nine straight playoff games — Game 6 is as much of a must-win game as it gets for the Suns. Phoenix can either force a Game 7 and give itself a chance at the first title in the 53-year history of the franchise or deal with the disappointment of what could have been as the Bucks celebrate a championship on their home court.

“I like it,” Ayton said. “Tables are turned now. Now, we’re the desperate team.”