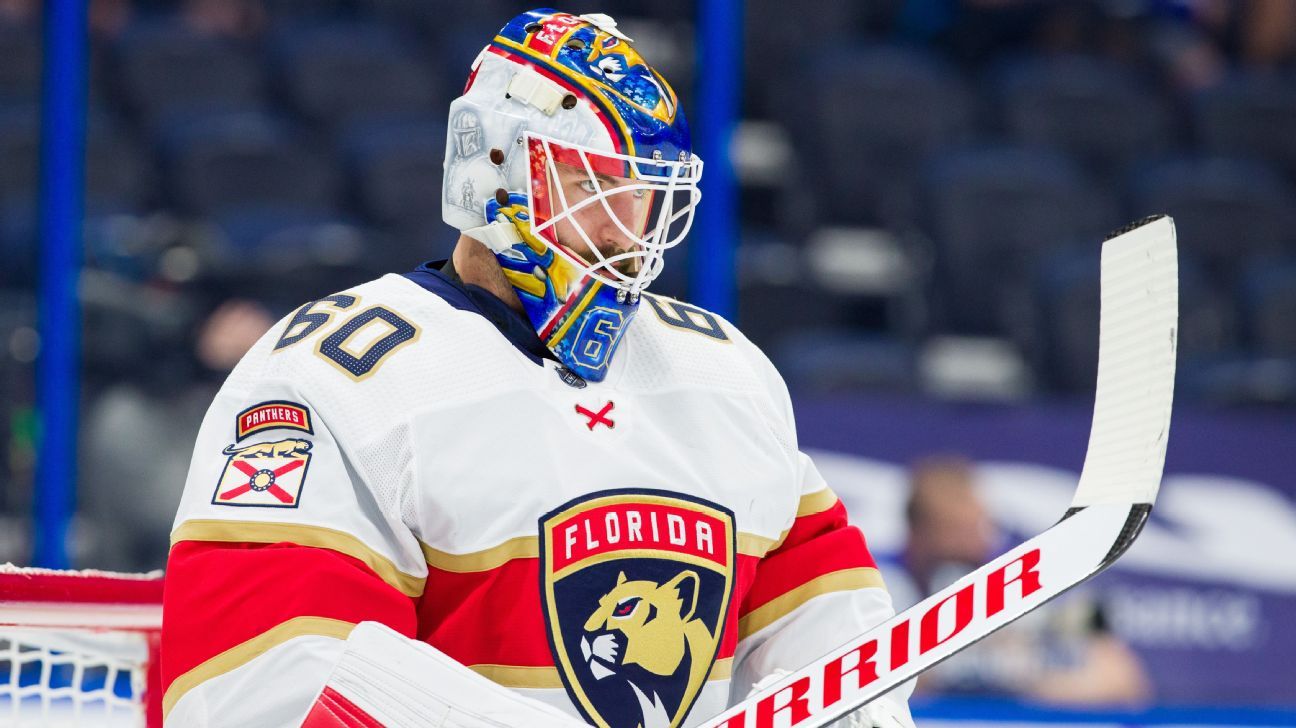 In the NHL, we typically call July “cottage season.” After the free agency frenzy of July 1, players and executives get lost for a few weeks, retreating to summer homes and vacation spots across the world (though if it’s in Canada, that home is almost always called a cottage).

Nothing is typical about 2021. The Tampa Bay Lightning won the Stanley Cup on July 7. The buyout window opened on July 8. Protection lists for the Seattle Kraken expansion draft were due over the weekend. On Wednesday, we’ll have the expansion draft, and the entry draft is Friday and Saturday. Then on July 28, free agency begins.

“Craziest three-week stretch I remember in my time in the league,” one front office executive told me last week. He has nearly two decades of experience.

I worked the phones over the past few days to get some buzz on what to expect this coming week, and beyond.

Kraken honing in on a netminder?

The Kraken will need at least two goalies, and it seems they have settled on one: Chris Driedger of the Florida Panthers. In fact, word is Driedger should be signing a multi-year deal after being the selection from the Panthers; I’ve heard it’s in the three-year range.

There are some great, young, budget-conscious options for Seattle to choose if Driedger is goalie 1A. I texted an NHL goalie coach on Sunday to find out whom he would choose as the backup to Driedger. His answer: Kaapo Kahkonen of the Minnesota Wild or Vitek Vanecek from the Washington Capitals.

The Kraken haven’t tipped their hand much, but behind the scenes they have been playing hardball the last few weeks from what I’ve heard. If a team wanted assurance that one of their unprotected players wouldn’t be selected, Seattle’s initial asking price was a first-round pick as compensation, at minimum. I do believe some side deals were made.

The Kraken are also expected to flip some of their expansion picks immediately after being selected — just as the Vegas Golden Knights did — so expect them to stay busy.

I canvassed one veteran player, one prominent agent, one assistant coach and one front office executive on Sunday after the protection lists came out, and asked: Who are the most obvious pickups for the Kraken? The two most common answers were Yanni Gourde (Lightning) and Max Domi (Blue Jackets).

Domi is coming off a rough season and had shoulder surgery in June, which should sideline him until at least November. But he’s a former 70-point score on an expiring deal — making him a good player to flip at the trade deadline.

As for Gourde? The Lightning left the Kraken plenty of valuable players, thanks to their cap crunch, but Gourde is a gritty, do-everything center around whom a team can build a line.

Two blueliners that could be fits

“Both those guys are on good deals,” the player said. “De Haan has been rumored to the Kraken for a while. Dillon played junior hockey in Seattle [the WHL’s Seattle Thunderbirds], so I bet they’ll want some guys with local connections.”

Top of the draft coming into focus

Owen Power is the presumed No. 1 pick of Friday’s draft, and it would be surprising if the Buffalo Sabres didn’t select the 6-foot-6 defenseman.

“I’d be just as stunned if Matty Beniers doesn’t go to Seattle [at No. 2],” one scout told me last week.

A seven-part, behind-the-scenes docuseries going on and off the ice and in locker rooms for an all-access pass during the pursuit of the Stanley Cup. Watch on ESPN+

When I talked to the Massachusetts-born Beniers last week, he told me he idolized Patrice Bergeron and models his game after him. “Watching him pretty much my whole life, that’s a guy I’ve always admired,” Beniers said. “So I’ve tried to make myself into that type of player, a responsible two-way player with skills to make plays, but also has a really strong hockey IQ.”

Beniers is often noted for his high motor, too. The scout told me he thought Beniers would go No. 2 because of his talent, but also because it will be harder for Seattle to find centers later in the draft.

How high will Klimovich go?

A sleeper pick in this year’s draft: Danila Klimovich, from Belarus, who could sneak into the first round. Like Yegor Sharangovich (No. 141 overall to the Devils in 2018) Klimovich burst onto the scene late, in part because of lower exposure being from Belarus.

Klimovich didn’t have a chance to play in North America until this year’s IIHF under-18 world championships in Texas — and what an impression he made.

“At the same time the U.S. and Finland were playing, every GM cleared the nice rink in Dallas and went to the s—ty one where the Belarusians were playing,” one person who attended the tournament said. “Because Klimovich was so good, they had to see him for themselves.”

The center scored six goals in five games that tournament.

In leaving pending unrestricted free agent Alex Ovechkin off their protection list, the Capitals were able to protect an additional forward, which ended up being Daniel Sprong.

Ovechkin’s unprotected status is only a formality. Most people in the league believe there’s a handshake deal or at least a framework of a new deal in place between the Caps and their captain, which should be announced after the expansion draft.

In May, I was told: “If Luke Hughes is there for them, the Devils or the Canucks will have a hard time not taking him.”

Then the draft lottery happened. The Canucks, who have 21-year-old Quinn Hughes, got the ninth pick. The Devils, with 20-year-old Jack Hughes, pick at No. 4.

It’s tough to imagine Luke Hughes falling to No. 9 at this point. Most people I’ve talked to think New Jersey will end up selecting the youngest Hughes brother. If the Devils don’t go Hughes, the other player they seem to be hot on is Swedish defenseman Simon Edvinsson.

There are teams in the top 10 of the draft thinking about selecting goalie Jesper Wallstedt. I was impressed by Wallstedt’s maturity when I spoke to him on the phone last week. He grew up idolizing Henrik Lundqvist, and even went to Lundqvist’s goalie camps as a kid.

Drafting a goalie in the first round hasn’t seemed so risky or rare the last three years. Florida feels great about selecting Spencer Knight at No. 13 in 2019, and Nashville selected Yaroslav Askarov at No. 11 last year, who was viewed as an exceptional talent.

Wallstedt isn’t the only goalie projected to be taken in the first round this year; Sebastian Cossa is the other. I also loved talking to him, and enjoyed learning that he played football for five years as a center and a linebacker. Rarely do you see a football/hockey crossover athlete.

There are some teams that view Cossa ahead of Wallstedt, so it will be intriguing to see where both end up.

Even though they picked a goalie in the second round last year (Drew Commesso) it wouldn’t be shocking to see the Blackhawks draft another goalie, this time in the first round.

I also was told the Blackhawks could be active in free agency for a goalie; there are plenty of veteran options available.

The New Jersey Devils are trying to accelerate their rebuild and expect to be more competitive in 2021-22. Acquiring Ryan Graves in a trade from the Avalanche was step one.

I hear that they are also in the market for a veteran goalie (just like last year, when they signed Corey Crawford, who retired before suiting up in a game for them).

The Anaheim Ducks left Henrique unprotected, after trying to trade the forward last year to no avail. If he is not selected, it sounds like the Ducks will still try to move him this year, but may have to retain some of his $5.85 million salary.

It’s hard to get a sense of when a Seth Jones trade may go down, as Columbus GM Jarmo Kekalainen isn’t afraid to do the bold move — like hold onto a player who doesn’t want to re-sign, on an expiring contract, to begin the season.

The expectation, however, is that Jones will be moved at some point — though his situation isn’t as untenable as Jack Eichel‘s is in Buffalo or Vladimir Tarasenko‘s is in St. Louis. In both Eichel’s and Tarasenko’s cases, it seems the loss of trust between player and club seem irrevocable.

What to make of the Isles’ decisions

When the protection lists came out and I saw Josh Bailey and Jordan Eberle both available from the Islanders, my first instinct was that GM Lou Lamoriello cut a side deal with Kraken GM Ron Francis. That might be the case, but it was pointed out to me that a theme of the Islanders protection list is cost-cutting.

The Islanders are often the toughest team on which to get information, as Lamoriello runs a tight ship. But we know that getting a new deal for restricted free agents Anthony Beauvillier and (especially) Adam Pelech are priorities for the Islanders. It appears re-signing UFA Casey Cizikas is also high on Lamoriello’s to-do list.

Should Seattle select Bailey or Eberle, the door for Kyle Palmieri to re-sign will be opened, or the recently bought-out Zach Parise to slot in.

New York also needs to replace Nick Leddy, and it wouldn’t be surprising to see the Isles in on the Ryan Suter courtship.