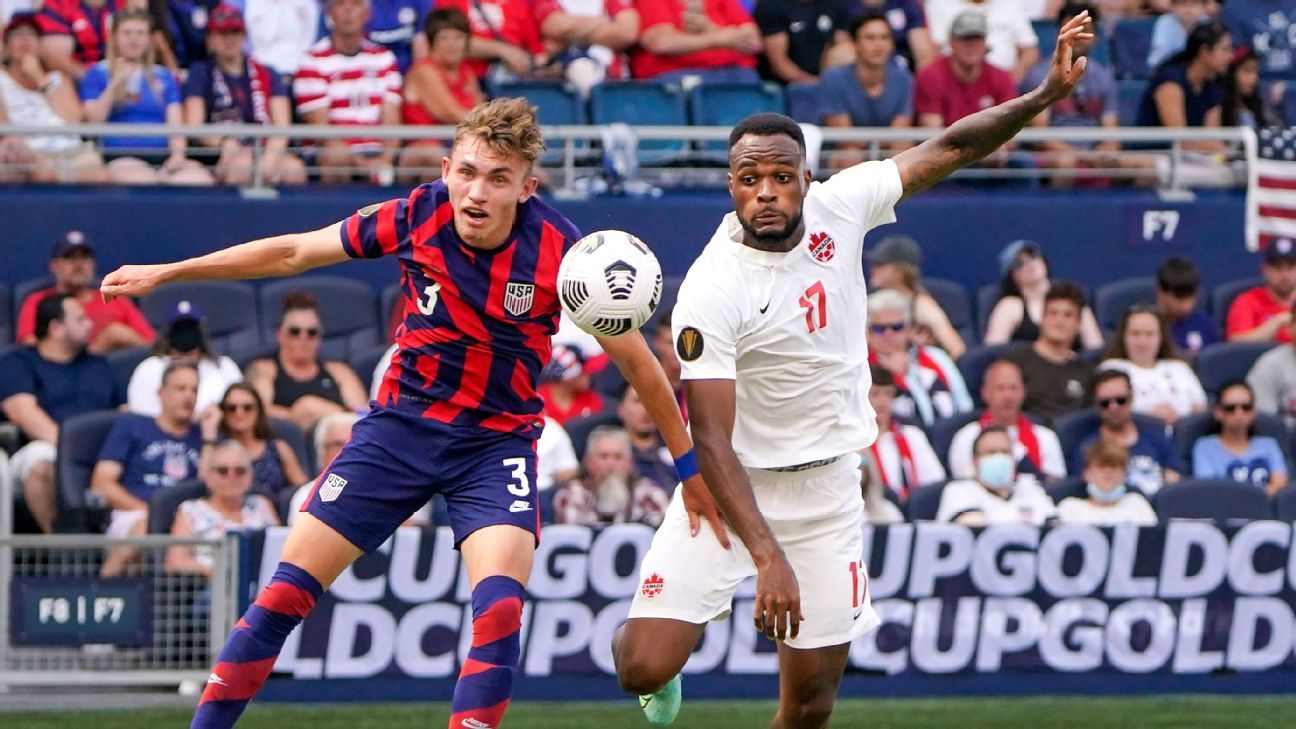 Positives were hard to find in the United States men’s national team’s 1-0 Gold Cup victory over Canada on Sunday.

The win in the group stage finale meant the U.S. secured the top spot in Group B with a perfect 3-0-0 record. Practically speaking, and depending on results later on Sunday, it means the U.S. will likely avoid a matchup with Mexico prior to the final on Aug. 2.

But they have to get there first, and based on Sunday’s performance against their neighbors to the north, that is by no means a foregone conclusion. This was a game where instead of offering a dynamic performance, the U.S. was second best, as Canada looked the more likely to score over the game’s final 60 minutes.

“There was a lot of suffering,” said U.S. manager Gregg Berhalter. He later added, “Overall we achieved our objective of the group phase, was the winner group, had the best goal difference in the group and we’re there. And now all the focus is on the quarterfinals.”

The game started out brightly enough, with Shaquell Moore converting Sebastian Lletget‘s low centering feed just 20 seconds into the match. The U.S. rode that momentum for the next 15 minutes, as James Sands’ hybrid role — playing center-back in defense, but stepping into midfield when in possession — causing some difficulty for Canada.

Coming out of a hydration break in the 30th minute, Canada seized control and the majority of possession thereafter. Certainly the loss of defender Walker Zimmerman to injury 10 minutes in didn’t help matters for the U.S., especially considering that Zimmerman is one of the few veteran players on the team. But the same fate befell Canada striker Ayo Akinola in the first half, with Cyle Larin joining Akinola on the sidelines just eight minutes into the second half. And yet the Canadian midfield had the upper hand, with Tajon Buchanan looking especially dangerous, no matter where he lined up.

“I though the U.S. were able to cause [our] back five problems,” said Canada manager John Herdman. “Obviously, Gregg [Berhalter] had put some work in to just put Lletget in positions that were difficult for us.

“But I think we adapted at the water break, and we were able to shift into a 4-4-2 in that three-box, three attacking and started to take control of the game.”

It must be said that the U.S. backline held up reasonably well over the course of the match, though it benefited from some lenient refereeing from Andonai Escobedo. Goalkeeper Matt Turner was called on to make three saves. Miles Robinson put in a Man of the Match performance, with Sam Vines and Sands also impressing. Robinson put out numerous fires throughout the match, showing off his ability to defend one-versus-one.

“I think Miles has taken us [to] the next step, and now it’s about a knockout game,” said Berhalter. “Can he recover now, and then in a knockout game can he repeat that same type of performance.”

Sands passing out of the back caught the eye, though there were moments in transition where he had difficulty recovering.

But the lasting image of the day was one of the U.S. chasing the match, and over the last hour Canada (405 attempted passes in that span per ESPN Stats & Information) had a sizable edge in possession over the U.S. (263 passes attempted).

At one point, Berhalter cited the hot weather as a reason for the U.S. team’s struggles, explaining that “decision-making under these conditions, you get stressed.”

He also mentioned that they had to manage the game for the remaining 89 minutes after Moore’s goal. Not to belabor the point, but the conditions were the same for both teams, and a 1-0 lead after 20 seconds put the U.S. in a position where they could dictate the tempo. Granted, the onus was on Canada to commit numbers forward, but that should have offered the U.S. some transition opportunities.

So why the difficulties? The link play of Gyasi Zardes and Daryl Dike was subpar, though the same could be said for the quality of passes into them. This was also a day when the U.S. simply struggled to win the ball back once possession was lost. The U.S. didn’t have much success in terms of the grittier aspects of the game. That was illustrated by the U.S. losing out to Canada in terms of tackle percentage (33.3 percent), duels (44.1 percent) and aerials (36.4 percent).

More than anything, the match was reflective of the relative inexperience of the group. It’s one thing to go up against Martinique. It’s quite another to compete against a Canada side that looks more and more like a team on the rise.

“We have a young, sometimes naive, innocent group; guys that haven’t played in too many CONCACAF games that are difficult,” said midfielder Cristian Roldan. “The refereeing is different; the competition is different. So we have to be savvier in the way we close out games.”

The U.S. now has a week to prepare for the quarterfinals, which will see them play either Costa Rica or Jamaica. Neither will be an easy out. The Canada match marked the second time in three games that the U.S. had difficulty with a physical, athletic opponent with attacking elements that could threaten. This young U.S. is learning lessons on the fly, and can gain confidence that it is doing so while recording victories.

They’ll be pushing for that to continue into the knockout stages.