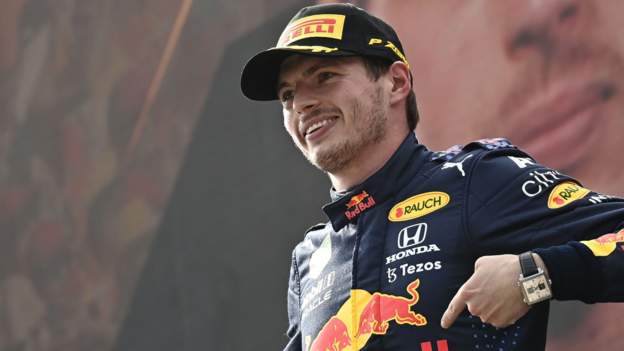 Max Verstappen might be expected to be feeling the pressure by now, but the Red Bull driver is coolness personified as he prepares for this weekend’s British Grand Prix.

Seven years into his Formula 1 career, the 23-year-old Dutchman finally has a real shot at the world title, and his rival is the most successful driver of all time, Lewis Hamilton. Yet, for now at least, Verstappen is taking it all in his stride.

The fact that Red Bull could go toe to toe with Mercedes this season has been obvious since the very first race. But Verstappen’s approach has not wavered. From the start, his mantra has been that it’s a long season, and he’s just trying to do the best he can each weekend. “I just live in the moment,” he says in an interview with BBC Sport. “One race at time.”

This is the public manifestation of what every sportsman is told about success – don’t think too far ahead, focus on the now, on what you can control, the rest will take care of itself.

It’s easy to say; harder to do. And with Verstappen, it’s more than mere cliche and self-affirmation. It really is how he is dealing with the biggest year of his life.

“It’s just how I’ve worked all the time,” he says. “I don’t like to dream or think ahead of stuff. I want to work to be the best I can be and then we’ll see again the week after.”

Suggest to him that it might be more difficult to approach weekends this way this year, given what’s at stake, and the answer is immediate.

“No,” he says, “it’s been easier, because I know I have a good car, so I am always looking forward to the next race.”

This is the way Verstappen is. ‘Matter of fact’ is a phrase that might have been invented to describe him. There is no fuss or frills. Everything just is what it is.

He’s in F1 to win, and now he has a chance to do so on a regular basis. The championship has been a goal for as long as he can remember, and now it’s clear he has a real chance of it. For Verstappen, it feels like the way life is meant to be.

‘My dad was sometimes worried I couldn’t be bothered’

Verstappen was in many ways born to be in F1. His father is the ex-F1 driver Jos Verstappen and his mother the former champion go-karter Sophie Kumpen.

When Jos’s F1 career finished in 2003, he devoted his life to preparing young Max to follow in his footsteps. The two toured Europe together tearing up the continent’s karting tracks. But parental tutelage only goes so far. Max’s talent appears to be a distillation and concentration of those of his parents, but his calm approach to his job comes from elsewhere.

“I have always been like that,” Verstappen says. “My dad sometimes was a bit worried that I couldn’t be bothered or I was too relaxed. But I said, ‘Dad, don’t worry, this is just the way I like it and how I approach to get into a race weekend or, like, my zone.’

“Up until F1, he was still worried about it, but he also could see that he couldn’t affect that bit of my preparation. Still nowadays my dad is more excited about starting the F1 weekend than I am. I get sent so many things, my dad asking questions about the weekend, and I am like, ‘I will find out when I get to the track.’

“At the end of the day, it is like that. I can tell you a 10-minute story about what I think, but 70% of the time it turns out different. So I prefer to save the energy and just say we’ll find out and see what happens. That’s how I approach it, at least. I’m pretty relaxed about it.”

So far, it has worked out pretty well in 2021. Verstappen heads into this weekend’s British Grand Prix 32 points ahead of Hamilton – an advantage so large that he will leave Silverstone on Sunday still at the head of the championship even if the Mercedes driver wins the Grand Prix and the new ‘sprint qualifying’ short race on Saturday afternoon, which also gives points to the top three, and Verstappen scores no points in either.

Hamilton said on Thursday that he believes beating Verstappen this year is a “tall order”. But Verstappen himself is taking nothing for granted.

“I always try to be as consistent as possible, try not to make too many mistakes, and try to score the most available points each weekend,” he says. “Most of the time [in my career] that was third, occasionally second. But this year, with a more competitive car, naturally you fight for the high spots.”

And he says the higher stakes have changed nothing for him.

“No, I always know that I cannot afford to make mistakes or have a zero points score. That’s the most important.”

‘You focus on yourself; everything else doesn’t matter’

There have been a couple of mistakes this year – Verstappen missed pole in both Imola and Portimao early in the season with minor driving errors. It looked at the time as if the new level of expectations that come with a title challenge were getting to him.

In fact, Hamilton made the point himself, albeit obliquely, when he referred to Mercedes not being able to rely on mistakes from Red Bull to sustain their title challenge.

Since then, Hamilton has ramped up the pressure a little more. He said he believed Verstappen “feels perhaps he has a lot to prove” – something Verstappen denied point blank.

He drew attention to the “bendy wing” on the Red Bull, a remark which led to a rules clarification from governing body the FIA that strengthened the load tests cars are subjected to.

Verstappen and Hamilton even had an argument behind closed doors in the drivers’ briefing at the French Grand Prix, when Hamilton referred to teams “cheating” after Pirelli revealed that Red Bull had been running tyres at lower than expected pressures, and blamed that for the failures that affected Verstappen and Lance Stroll’s Aston Martin in Azerbaijan.

Hamilton has denied playing mind games. But if he thought that he might get to Verstappen with all this, it seems he miscalculated.

“Everyone is free to handle it in whatever way they want,” Verstappen says. “At the end of the day, it doesn’t matter to us. We just have to look at ourselves and try to improve every single race weekend and not get distracted by other people or at least that’s what we try to do. Everyone in the team.”

Does Verstappen believe Hamilton is trying to get into his head?

“I don’t really pay attention to it if so,” he says. “We are just very focused on the job within the team and that’s what try to do every weekend.”

How does he keep such singularity of purpose?

“Because that’s what counts. That’s how my dad taught me to live, you have to focus on yourself and work with your team. Everything else doesn’t matter.”

“After spending a lot of years with my dad, yes.”

How did he do that?

“In a lot of different ways. Nice ways. A bit more angry ways. No, it works for me. I needed it. He made me toughen up, which is good.”

The intensive training programme Verstappen senior put his boy through led to Max making his F1 debut at a very young age. The result has been that he has had to turn from a boy to a man in view of the entire world.

“It’s been all right,” Max says. “People always ask me, ‘Do you miss out on stuff?’ And I say, ‘No, I don’t think so because my whole life is about racing and I love being at a race track, instead of being at a club like other 17-18 year olds going out all the time or going to study.

“I never wanted to do any of those things, especially not studying. I just wanted to focus on racing and winning. I am very happy with how the last few years went.”

Is he ready for the new level of attention that would come with being world champion?

“It doesn’t matter if I’m ready or not,” Verstappen says. “I know what I have to focus on. If you get more famous or whatever, it doesn’t matter. I have to perform here at the weekend and then I go back home and spend time with family and friends and you don’t see me that much.”

And what of the future, whatever happens this year?

“My ambition is to win every single race, be on pole every weekend and win 20 world championships,” Verstappen says. “But that’s unrealistic. You need luck in your life and a very dominant car and not always it’s the case that one team will be dominant for such a long time.

“I try to do the best I can this year and then we will see what happens next year.”