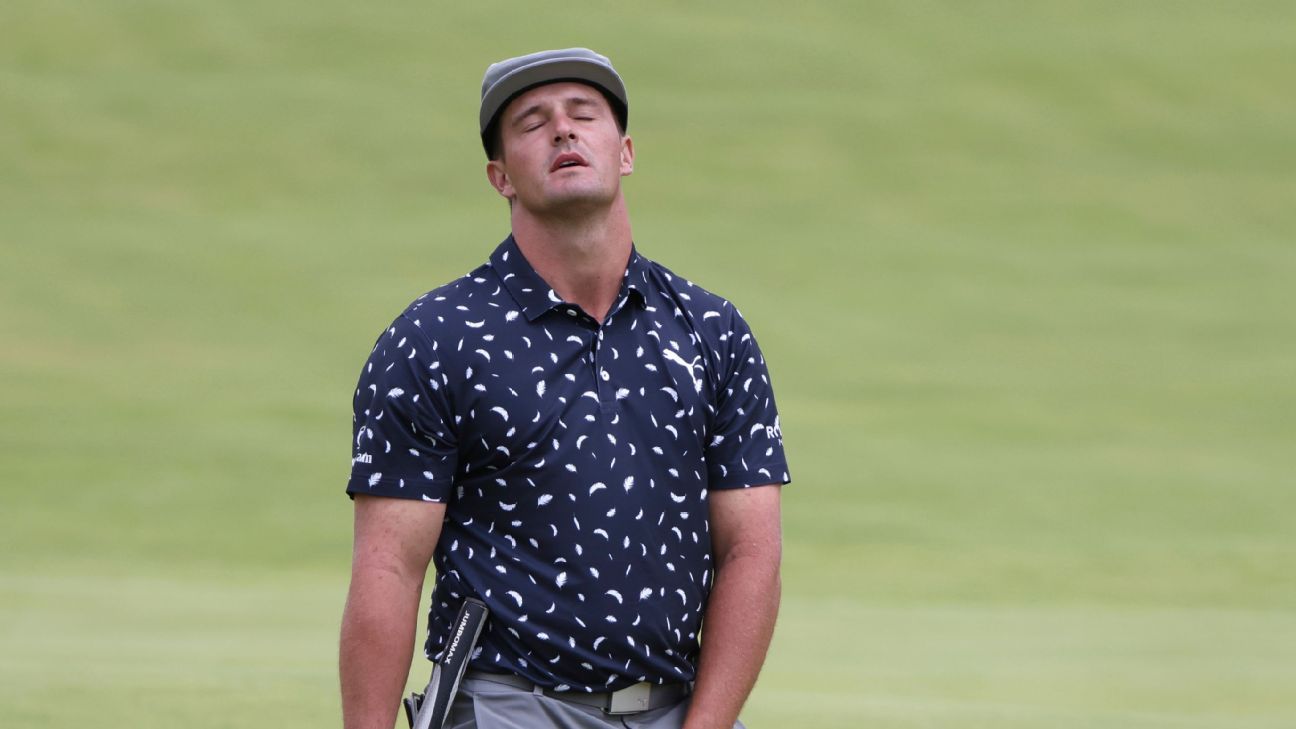 Another round at a major championship, another night when South Africa’s Louis Oosthuizen goes to bed as the leader.

Oosthuizen took advantage of Royal St. George’s friendlier-than-expected conditions in the first round of The Open on Thursday to take a one-shot lead with a 6-under 64.

Will Oosthuizen finally close the deal this weekend and win his second major? Will the winds blow any harder off the English Channel? Will Bryson DeChambeau criticize his putter?

Here’s what to expect in the second round:

After a closing 6-over 77 last month at the U.S. Open, which included an 8-over 44 on the back nine, DeChambeau brushed it off as nothing more than bad breaks and the ball not bouncing the right way.

Two weeks later, he parted ways with his longtime caddie, Tim Tucker, the day before the start of the Rocket Mortgage Classic in Detroit.

And now, after hitting only four of 14 fairways at Royal St. George’s in Thursday’s first round, which led to DeChambeau posting a 1-over 71, it was his Cobra driver’s fault.

“That’s what I said a couple of days ago; if I can hit it down the middle of the fairway, that’s great, but with the driver right now, the driver sucks,” he told reporters on Thursday. “It’s not a good face for me, and we’re still trying to figure out how to make it good on the mishits. I’m living on the razor’s edge, like I’ve told people for a long time.”

That didn’t sit well with the people at Cobra Golf.

“It’s just really, really painful when he says something that stupid,” Ben Schomin, tour operations manager for Cobra Golf, told Golfweek. “He has never really been happy, ever. Like, it’s very rare when he’s happy.”

Here’s an idea for DeChambeau: Don’t mishit it, or better yet, don’t hit driver on the holes where you might not need it.

DeChambeau’s driving accuracy was tied for second-worst in the first round; New Zealand’s Ryan Fox hit only three of 14 fairways.

A few hours after making those comments, DeChambeau apologized on Instagram.

Who can’t wait for Brooks Koepka to show up on the first tee with a Cobra driver on Friday?

Jordan Spieth’s resurgence has been one of the best stories in golf this summer. After going nearly four years without a victory, he finally won again at the Valero Texas Open in April. Then he tied for third at the Masters and was solo second at the Charles Schwab Challenge.

As good as Speith has been over the past six months, however, it still seems as if his comeback won’t be complete until the three-time major champion wins another one.

Thursday’s opening round was a good start. For the third time at a major, Spieth opened with a 65 or better. He ended up winning the previous two times he did it — with a 64 at the 2015 Masters and 65 at The Open at Royal Birkdale in 2017.

According to research by ESPN Stats & Information, Spieth is among only four players to shoot 65 or better in three opening rounds at a major. Dustin Johnson, Rory McIlroy and Raymond Floyd are the others.

“To be honest, the path that I’m on and where I’ve been before in the game, I feel really good about my chances going forward, as good as they have been historically,” Spieth said. “As far as surprised or not, I guess I feel like I’ve been trending the right way and certainly had a chance this year already at Augusta. Made some mistakes in the first round and second round that I shouldn’t have made that I very well could have won that golf tournament this year.”

Spieth certainly didn’t make many mistakes on Thursday. He hit nine of 14 fairways, 14 of 18 greens in regulation and needed only 27 putts. He moved to the betting favorite to win The Open at +400, according to Caesar’s Sportsbook by William Hill.

For the fourth time this year, Oosthuizen is atop the leaderboard at a major. He shared the 36-hole lead at the PGA Championship at Kiawah Island and the 18-hole and 54-hole leads at the U.S. Open. Of course, Oosthuizen didn’t win either of those tournaments, losing to Phil Mickelson by two shots at the PGA and to Jon Rahm by one shot at the U.S. Open.

In this edition of America’s Caddie, Michael Collins travels to the UK to tour The Open Championship host town of Sandwich & talk to 3-time Open winner Sir Nick Faldo. Stream now on ESPN+

If nothing else, Oosthuizen, the winner of The Open at St. Andrews in 2010, has shown uncanny ability to put major disappointments in the rear-view mirror.

“Yeah, it depends if you lost it or someone else beat you,” Oosthuizen said. “I think in both of those I was beaten by better golf at the end there. It takes a little while, but you have to get over it quickly, otherwise it’s going to hold you back to perform again.”

An Englishman hasn’t won The Open on English soil since Tony Jacklin at Royal Lytham & St. Annes in 1969.

Five Englishmen — Tommy Fleetwood, Andy Sullivan, Danny Willett, Jack Senior and Justin Rose — are tied for ninth at 3 under, three shots back of Oosthuizen. Paul Casey is one shot behind them after an opening with 2-under 68.

“First round of The Open, you can only lose it on the first day,” said Fleetwood, who was solo second at The Open at Royal Portrush in 2019, six shots behind winner Shane Lowry. “You can’t win it. It’s just nice to have shot a good round and get going and move on to [Friday’s second round].”

Lee Westwood, who is attempting to win his first major in his 88th career start in one, has work to do after a 1-over 71. Tyrrell Hatton, the highest-ranked English player at No. 10 in the world, opened with a 2-over 72.

Mickelson, who finished second to Darren Clarke at The Open at Royal St. George’s in 2011, more than likely won’t be around for the weekend. He shot 10-over 80, without a single birdie, and is tied for last in the field with Australia’s Deyen Lawson.