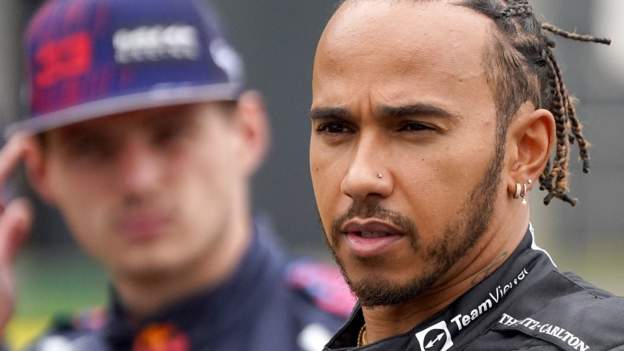 The Mercedes driver is 32 points behind Max Verstappen of Red Bull before this weekend’s British Grand Prix after four wins in five races for the Dutchman.

Hamilton said: “It’s what I dream of and am working towards. I am massively driven. But it’s a tall order.

“Their performance has gone a little bit out of reach but we are working as hard as we can to close back up.”

Hamilton has not won a race since the Spanish Grand Prix in mid-May, since when Red Bull have won every event, with Sergio Perez adding a victory in the Azerbaijan event to Verstappen’s four.

“When a challenge comes up, I face it head on,” Hamilton said in an interview for BBC Radio 5 Live’s British GP preview show.

“I have never run away from a fight. When we entered this season and we saw the challenge we had on, it was like, ‘Game on, love this, this is what we live for.’ It has been exciting.”

Hamilton said that the rule changes on bodywork and aerodynamics made for this season to slow the cars down had affected Mercedes more than most other teams.

“These rules have impacted us massively,” he said. “We have had the engine scenario changed last year when we lost qualifying mode and then this new rule shift has hit us hardest.

“We are doing the best we can. The cost cap has come in, which has made it even harder for development.

“All I know is that, whatever the outcome, there has been an immense amount of growth and I am going to be here for longer than this year.

“It is not going to be the end of the world if we don’t but we are going to give everything to make sure that we do.”

He said earlier this week that the racist abuse suffered by England footballers Marcus Rashford, Bukayo Saka, Jadon Sancho after the Euro 2020 final was “devastating to see, but shows that as a nation we have a long, long way to go”.

At Silverstone he said he had found the players’ reaction to the abuse “hugely inspiring”.

Hamilton said: “The manager’s done a great job in creating a diverse team, which is amazing to see. And then at the end, bringing on these three black players and I was like, ‘Wow, they are empowering those individuals to go out and doing something great.’

“I could see the benefits if we win, it will be magical and a double win, culturally also for the black community. And I could feel if it doesn’t go well I know exactly what’s coming.

“It happened and my heart just sunk and we saw the aftermath.

“What I was most proud of was the dignity and strength these players had and how they handled it. That for me was hugely inspiring and I couldn’t be more proud of those players.”

Listen to the full interview with Lewis Hamilton on 5 Live Formula 1 at 20:00 BST on Friday, 16 July

Dodgers’ Buehler to have season-ending surgery
Premier League in 1992: The rebrand that changed everything
Nairo Quintana disqualified from 2022 Tour de France for drug infringement
Amy Pieters: Dutch cyclist moves to an intensive neuro-rehabilitation facility in the Netherlands
Packers’ WRs meet with QBs after Rodgers’ rant