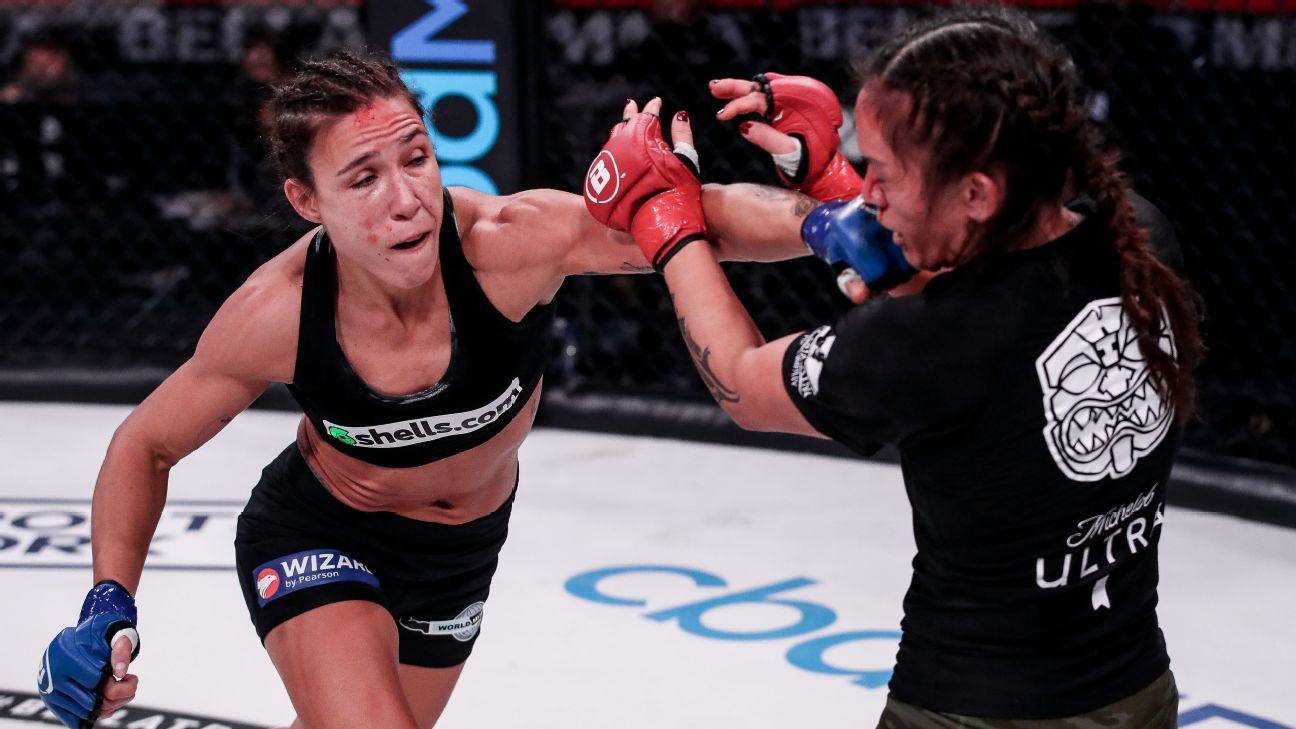 It is champion vs. champion, with a twist.

When unbeaten Juliana Velasquez makes the first defense of her Bellator MMA flyweight title on Friday, she will be facing a fellow Bellator flyweight champ — but one who reigns in a different fight discipline.

Denise Kielholtz, the challenger in the main event of Bellator 262 at Mohegan Sun Arena in Uncasville, Connecticut, is the fight promotion’s only woman kickboxing champ.

Kielholtz has a 47-3 record in professional kickboxing but has not competed in that sport since defending her Bellator belt in April 2017. In the four years since — while still hanging on to the title in an inactive division — it’s been all MMA for the 32-year-old from the kickboxing hotbed of Amsterdam. And in winning six of her seven fights during that time, Kielholtz has shown off an array of techniques well beyond what she brought over from kickboxing. Half of the victories in her recent run have come by submission.

“I even have a cauliflower ear,” Kielholtz (6-2 overall) told reporters on Wednesday with a smile, sounding proud of her newly acquired symbol of gritty work on the grappling mat. “I am now officially an MMA fighter.”

Of course, Kielholtz has not forgotten how to use the fists that earned her the nickname “Miss Dynamite.” In her most recent trip inside the Bellator cage in October, she faced Kate Jackson, who just nine months earlier had competed for the 125-pound title. Kielholtz knocked her out in 43 seconds.

Velasquez is well aware of her challenger’s expansive skill set, and she can relate. While Kielholtz is best known for her kickboxing and Velasquez for her jiu-jitsu, both women are judo black belts. In other words, this is a test of mixed martial arts, and the champ prefers it that way.

“I see her as a complete fighter,” Velasquez (11-0) said Wednesday through an interpreter. “And that’s how I prepare for all of my opponents.”

That is the mindset that fuels Velasquez’s ease in handling any added pressure that might come with being a rare undefeated champion at the top level of the sport. Among all of the titleholders in Bellator and the UFC, only two have unblemished records: Yarolslav Amosov, the 26-0 Bellator welterweight king, and Velasquez. The 34-year-old from Rio de Janeiro, who is No. 7 in ESPN’s women’s flyweight rankings, finds motivation in what sets her apart.

“I don’t feel extra responsibility to never lose,” Velasquez said. “My commitment to myself is to keep improving, always showing up and winning my fights.”

Now, committing oneself to winning while not accepting responsibility to never lose might sound like championship-level mental contortionism, but fighters chasing greatness do have to find reasons to believe. That is something Velasquez’s challenger understands as well as the champ.

“It all starts with belief,” Kielholtz said. She was addressing what paved her own gradual road toward finding a comfort level as “a complete MMA fighter, not just a kickboxer doing MMA.”

And yet while Velasquez is focusing on making Friday play out like any other night in her fight career — another victory, she hopes, in an unending string of them — Kielholtz is dwelling on the differences that might determine how the evening ends. An obvious one is that when Velasquez last fought, it was against a grappling-heavy opponent, not a dangerous striker.

Velasquez won the belt last December by beating Ilima-Lei Macfarlane, who came in as an undefeated champ in her fifth title defense, having won more than half of her fights by submission.

“No one is gonna stand longer than one round with me,” Kielholtz said. “She never faced a fighter like me before. I already faced a lot of fighters like her. And that’s going to be the big difference, you know? How is she gonna step to Plan B if Plan A doesn’t work?”

Both women, it seems, will be called on Friday to make adjustments. Kielholtz might be right in saying she has faced Velasquez’s style of fighter before, but she has not been in with a champion who’s on an unbeaten run. Velasquez plans to make her feel that difference.

But the champ has goals beyond what her opponent feels. She wants the fans feel something, too.

“I don’t want to be just a great champion inside the cage. I also want to be a great champion outside it,” Velasquez said. “I want people to be able to look up to me. … I want, when people look at me, they see me as an example, someone they can support and admire.”