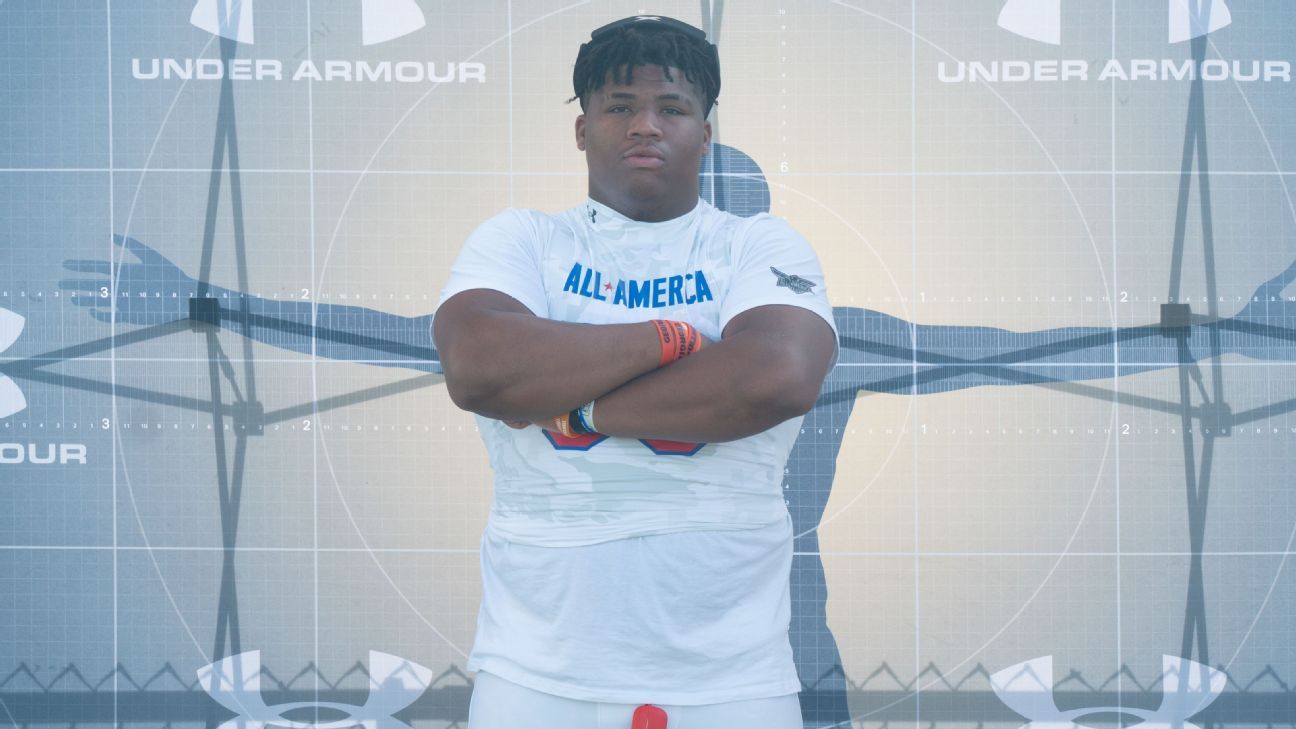 There was ample opportunity this spring to evaluate college football’s 2022 recruiting class after a flurry of college and select camps in May and June.

While we prioritize our rankings off game tape, not what a prospect does in shorts and tees, this year has been different. Given COVID-19’s effect on the high school season and many prospects seeing reduced snaps, our supplemental spring evaluations have become more crucial for the 2022 class.

We saw 20 new prospects enter this ESPN 300 update, a shake-up inside the QB rankings and a significant change at the top spot.

Let’s take a look at our updated rankings.

Nolen is not only the top prospect in this class but also arguably the best defensive tackle prospect ever evaluated in the ESPN 300 era. Making the jump over a very talented quarterback in Quinn Ewers was not an easy task, though it’s a decision we made confidently, as Nolen continues to display a rare skill set.

Landing an elite signal caller is a quest for most collegiate programs, but signing a defender who can impact a game from the heart of the trenches is more impactful and rarer to find, in our opinion. Nolen can disrupt up the middle at the core of the offense, both as a run-stopper and pass-rusher.

#ESPN300 DT Walter Nolen has the tools to be special! He’s continued to impress w/ each opportunity to evaluate. Possesses a supreme blend of size, power & quickness & is highly competitive & shown a desire to continue to work to improve #RollTide #Gators #UGA #GoBlue #Vols pic.twitter.com/KVs6gQSUCy

In terms of size, the five-star easily checks those boxes, measuring in at 6-foot-4 and 325 pounds, but Nolen is more than a big body. He is a lineman with elite mobility and quickness off the snap, consistently running five-second 40-yard dashes and posting L-drill times in the low seven-second range, which would be impressive for top perimeter players, let alone someone over 320 pounds.

Explosive and powerful, Nolen can anchor and eat up double-teams, overpower single blockers or elude them with agility, and chase down ball carriers. As a pass-rusher, he shows the ability to win with power on the bull rush, agility on a spin or with pure edge speed.

The Mississippi native is physically gifted with a confident swagger that accentuates those natural tools, and he plays with a relentless competitive spirit. He has also shown a desire to learn and improve at his craft, a promising indication that he will work to maximize his abilities at the college level. Nolen recently released a top five that consisted of Alabama, Florida, Georgia, Michigan and Tennessee, and he could be an immediate-impact contributor at any of those programs.

Burden had a terrific spring and summer campaign, capped off by a dominant performance at the Under Armour Future 50 in June. Burden really set himself apart during the 7-on-7 portion, where he consistently won contested matchups with outstanding route-running, leaping and ball skills. His burst out of his breaks to create separation was on an elite level. Burden won MVP of the event and moves up to our No. 2 WR ranking.

We ranked Campbell as one of the top tackle prospects in this class off tape, but Future 50 was the first event where we had a chance to see him in person. Among a group of elite line prospects at the event, Campbell was able to establish himself as a top performer, which propelled him up our offensive tackle rankings. At 6-6, 285 pounds, he is a big, muscular prospect with very good lower-body flexibility and agile feet. In addition, the LSU commit was competitive in winning one-on-one battles and leading drills.

The Alabama commit dominated in the trenches at the Under Armour Future 50 with rare initial quickness to beat blockers at a massive 380 pounds. He plays with great leverage strength and balanced feet, and is an absolute force to handle between the tackles. He is reminiscent of former highly ranked ESPN 300 DT Tyler Shelvin, who played at LSU.

The most notable quarterback adjustments off the 2021 Elite 11 finals mean two new quarterbacks not only enter the ESPN 300 but also find themselves ranked in the top 100 overall: dual-threat quarterback Nathan Johnson (No. 96 overall) and pocket passer Devin Brown (No. 98).

Johnson may be one of the more explosive dual-threat quarterbacks in the country, along with being one of the fastest players in the class, regardless of position. He displayed more consistent footwork and a quicker, tighter delivery at Elite 11

Brown, meanwhile, has really grown and developed physically. The USC commit’s mechanics are more coordinated and controlled, showing much improvement over the past year.

Elite 11 MVP Cade Klubnik jumped from No. 136 overall to No. 76 after one of the more consistent performances in recent memory. Accuracy is the fundamental essence of the position, and this is where the Clemson commit stood out.

Pocket passer Conner Weigman, a Texas A&M commit, bumped up from No. 51 to No. 37 by making big throws into tight windows throughout the event.

Updated 2022 #ESPN300 out this week. @CadeKlubnikQB really impressed at last week’s @Elite11 and was able to view every throw via @TheUCReport database from the entire week. #clemson @ClemsonFB pic.twitter.com/VJDS26J759

Other new entries to the ESPN 300

The Alabama commit is new to our ESPN 300 and admittedly a late entry for us, which further proves why recruiting is always an evolving evaluation process. Kite is a legitimate two-way player with great toughness and instincts. He is ultra-rangy on defense, as he can play near the box, which makes him scheme versatile.

Greene keeps a low profile, and though the Under Armour Baltimore Camp in May was the first time we saw the talented receiver in person, he didn’t disappoint. The 6-3 Greene is lengthy with a wide catch radius (74-inch wingspan) while still quick and sharp in and out of his cuts to create separation on defensive backs. He dominated one-on-ones and won MVP at a very talented camp. Oklahoma, North Carolina and Clemson are in strong contention for his commitment.

Last year’s UCReport Camp in Jacksonville, Florida, put Niblack on the radar with his 6-4, 220-pound frame and 74-inch wingspan, as well as his raw pass-catching skills. He emerged into a legitimate prospect this summer at college camps, as he became more explosive and controlled in his movement skills. With a lot of physical upside, the Florida native, who shares similar traits with O.J. Howard, quickly committed to Alabama.