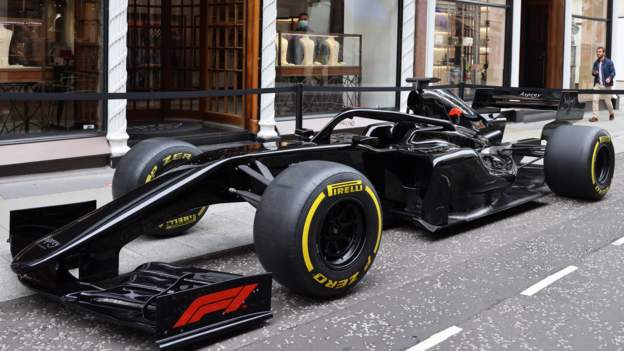 Formula 1 is making a break with history at this weekend’s British Grand Prix, with the introduction of a new weekend format that includes a second race in addition to the main event.

It will be the first time in history that the grand prix is not the only F1 race on a world championship weekend.

So-called ‘sprint qualifying’ is a shorter race on Saturday afternoon that will decide the grid for the main race on Sunday.

The starting order for the shorter race – which will be just over 100km in length, or about one third of the distance of a grand prix – will be set in a normal qualifying session shifted to Friday afternoon.

The hope is that it will spice up the action, add extra interest and provide more competitive jeopardy through the weekend.

F1 managing director Ross Brawn says: “I am very optimistic. I think it will be a very good event, a great race.

“And I think the drivers will go for it, because do we think Max Verstappen and Lewis Hamilton are going to have a different mindset going into that first corner, because it’s a sprint? I don’t think so. But that’s to be established, and that’s what we need to find out.”

Championship points will be awarded to the top three finishers – three for first, two for second and one for third.

How has it been received?

In general, drivers have given the idea a cautious welcome.

Many have said that it is a good idea to try new ideas, and that they will reserve judgement on the merits of this particular system until after they have tried it.

Williams driver George Russell said: “It’s an interesting concept and we’ve got to give it a chance. If it brings action and excitement then that is for the best interests of everyone.”

And four-time champion Sebastian Vettel, who drives for Aston Martin, said: “It makes the weekend a bit more intense. You have to come up with your set-up fairly quickly after just hitting the track. We’ll see if people like it.”

Why is it happening?

The hope is that introducing a second, shorter race will increase both audience interest in and the variability of a grand prix weekend.

The idea for the latest version of sprint-race qualifying has developed after the original plans for a reverse-grid sprint qualifying race – with the field starting in reverse championship order – were blocked last year by Mercedes.

The hope is that the new structure of the race weekend could be a positive change for F1 itself and race organisers, by increasing spectator interest and potentially income for both.

The argument is that moving qualifying adds a competitive interest to Fridays, which currently feature two practice sessions that are used solely for the teams and drivers to prepare their cars and plans for the weekend.

And other categories that have added a second race on Saturdays ahead of the main event on Sundays – such as Germany’s DTM Touring Car championship – have seen an increase in television audiences.

The move will involve a series of other sporting changes to the standard race weekend and is intended as an experiment to see whether it introduces extra levels of uncertainty and interest to the weekend’s action.

The plan is for there to be further weekends with sprint qualifying this year, after which an assessment will be made on its impact. If it is judged to have been successful, it could be used at more grands prix next season.

What are the rules?

The ‘sprint qualifying’ will be over 17 laps. Tyre choice for the start is free, and there is no obligation to make a pit stop for a different compound, as there is on Sunday.

The grid for the sprint qualifying will be set by a traditional-style qualifying session, which has been moved to Friday from Saturday.

As it is a work day, it will start later than normal at 18:00 UK time, in the hope of attracting a larger television audience than would be the case were it run at the more traditional time of 14:00.

How will the race weekend change?

The weekend will be restructured in the following ways:

Friday morning practice will run as normal, while the usual Saturday afternoon qualifying session will be held on Friday instead.

Parc fermé – the point at which teams can no longer make major changes to their cars – will be brought forward to the start of the Friday qualifying session. The reason for this is to prevent teams building cars specifically for qualifying, which would increase costs.

Tyre use will be restricted across the weekend compared to a normal grand prix, with a complicated set of rules aimed at increasing the jeopardy for the teams.

– In first practice, teams can use only two of the three types of tyre – hard, medium and soft

– Qualifying will be run only on the soft compound, with each team getting five sets

– One set of tyres only for second practice on Saturday morning, of the team’s choice

– Two sets of tyres for the sprint qualifying race, of the team’s choice

– That leaves only two remaining new sets of tyres for each team for the grand prix. There is free choice in terms of the compound for the start of the race.

How is it likely to play out?

F1 has billed sprint qualifying as a short blast that should generate both excitement of itself and the potential for a shake-up of the grid for the main grand prix.

Brawn says they have “really tried to encourage flat-out racing the whole time. We wanted to have no holding back in qualifying, no funny tyre choices in the qualifying and the same in the sprint.”

The concept of the sprint race being a flat-out, no-holds-barred event that differs from the main grand prix has been pushed heavily by Brawn as representative of the commercial rights holder.

But there is a hint of sales pitch about this, as there is no obvious reason why it would be the case, and a number why it will not and cannot be.

The drivers will not be able to push harder in this race than they can in the grand prix, as they face the same restrictions as they do in a longer race.

The Pirelli tyres remain the same, and are as prone to thermal degradation and the requirement for careful driving to ensure they do not overheat as ever.

And the distance of the race, and the mathematics of timing, mean that all teams will be wanting to avoid pit stops and run the sprint qualifying on a single set of tyres.

Strategists predict that the racing will likely distil into a series of what within F1 are known as ‘DRS trains’.

These are clumps of cars, following each other closely, but no-one able to overtake because each has use of the DRS overtaking aid as they are within one second of each other, and the use of it on one car cancels out its effectiveness on another.

This is why, when asked about his expectations for the sprint qualifying, Lewis Hamilton said: “It will just be a train, probably. Hopefully there will be some overtaking, but most likely it won’t be too exciting.”

In essence, then, ‘sprint qualifying’ is effectively the first stint of a normal grand prix being run on Saturday, and overtaking and close racing is no more or less likely than it is in the main event itself.

Reducing the chances of varying pace between the cars even further, strategists say the likelihood is that the vast majority of teams will choose the same tyre for sprint qualifying – the medium compound, as it offers the best compromise between pace and durability for a non-stop race of this length.

On top of that, the drivers will be extra-wary of avoiding an incident, as any collision or bodywork damage will mean a start lower down the grid for the grand prix itself, when the main points are scored.