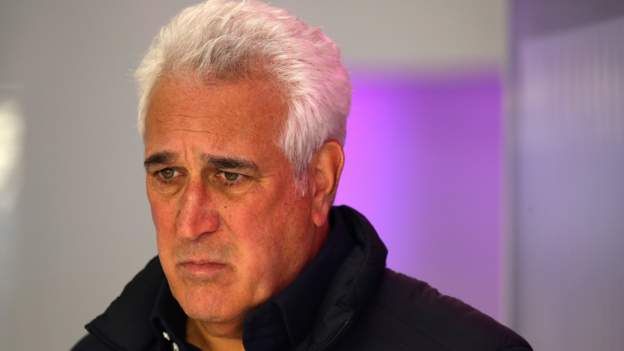 Aston Martin team owner Lawrence Stroll expects it to be another four or five years before his team can realise his ambition of fighting for the F1 title.

Stroll began the year expecting Aston to take a step forward after winning a race last year, but they lie sixth in the championship after nine races.

“I don’t think we can expect to win before four or five years,” he said.

The Canadian billionaire is in a restructuring drive that will see staff increase from 500 to 800 employees.

Stroll has signed Red Bull’s head of aerodynamics Dan Fallows to be Aston Martin’s new technical director, although his existing team say he will not be able to join Aston Martin “within the next couple of years”.

This is just one of a series of high-profile new signings – and Stroll says there will be another announced this week.

Resigned to a loss of competitiveness

Stroll changed the name of his team from Racing Point to Aston Martin after taking over the famous British sports car marque last year. This weekend will be the first time an Aston Martin car has raced at the British Grand Prix since 1959.

The team finished fourth in the constructors’ championship last season and Stroll targeted at least a step higher in 2021.

But the team have found themselves more badly affected by a change of rules for this season than most other teams.

Both they and Mercedes, whose car Aston Martin copy, run a different design concept from all the other teams. This uses a shallow angle from front to rear – known as low-rake – compared to the other cars, including the championship-leading Red Bull, who pioneered the opposing ‘high-rake’ philosophy.

Both Mercedes and Aston Martin have lost more performance from last year to this than all other teams except backmarker Haas after a rule change that cut away part of the rear floor to keep cornering speeds under control.

Stroll objected to the rule change and initially was trying to overturn it, but has now resigned himself to it.

“This year was a very controversial year with the cut in the floor with the aero regs,” Stroll said in a news conference before the British Grand Prix.

“You are all smart enough to see that the two low-rake cars lost about a second a lap. So it is no coincidence Mercedes are fighting for a championship that for many years they easily won.

“The change in regs that has severely penalised us and Mercedes is the reason for the decrease in performance from this year to last year.”

Stroll defended his own approach to competition that some rivals see as bullish.

“There are a lot of strong personalities and smart people in F1,” he said. “If you’re going to be pushed around, I don’t think you’re going to succeed in this or any other sport.

“I have stood for what I believe to be correct. I have not made a significant investment in this company not to be fighting for the world championships, so we are going to do everything we can within the rules to succeed.”

A change of plans

Next year, F1 introduces a completely new set of technical rules aimed at closing up the field, but Stroll believes Aston Martin still need time to get to the front.

“My track record in pretty much every other business I own, is to win,” Stroll said. “In F1, that means obviously world championships. Ultimately, that’s what we are striving for.

“Of course we all know that success in F1 or any other business doesn’t come overnight. It takes years to put the right people, tools, processes in place.

“But we’re building and investing in our team with the ambition of moving up the grid year by year and our ultimate ambition is to win world championships.”

Part of the team’s growth programme is to move into a new factory next year and to build its own wind-tunnel, an aerodynamic design tool.

Aston Martin had initially planned instead to share the Mercedes tunnel, believing restrictions in the rules mean it “didn’t make any sense” to have their own.

But Stroll said his chief technical officer Andrew Green had changed his mind on the issue.

“He came back to me and said: ‘I have realised there is upside potential on the times and availability we currently have using Mercedes to having the luxury of having our own’.

“And he said: ‘If you really want to be world champion, it is a tool we’re going to need.’ It cost me a lot of money, that change of mind. I was happy with his first concept.”

Stroll said he had no doubts about Lance being able to compete at the very front.

“I think Lance has done an extraordinary job,” Stroll said. “He is 22 years of age. His performances whether [being] on pole or several podiums. He is competing this year with Sebastian, they are probably about even. So I don’t have any concerns or feelings that Lance has lack of performance.

Stroll admitted that Vettel, who joined after a difficult final two years at Ferrari where he was outperformed by team-mate Charles Leclerc, had made a “slow start” to the 2021 season, but added: “He is doing a great job now.”